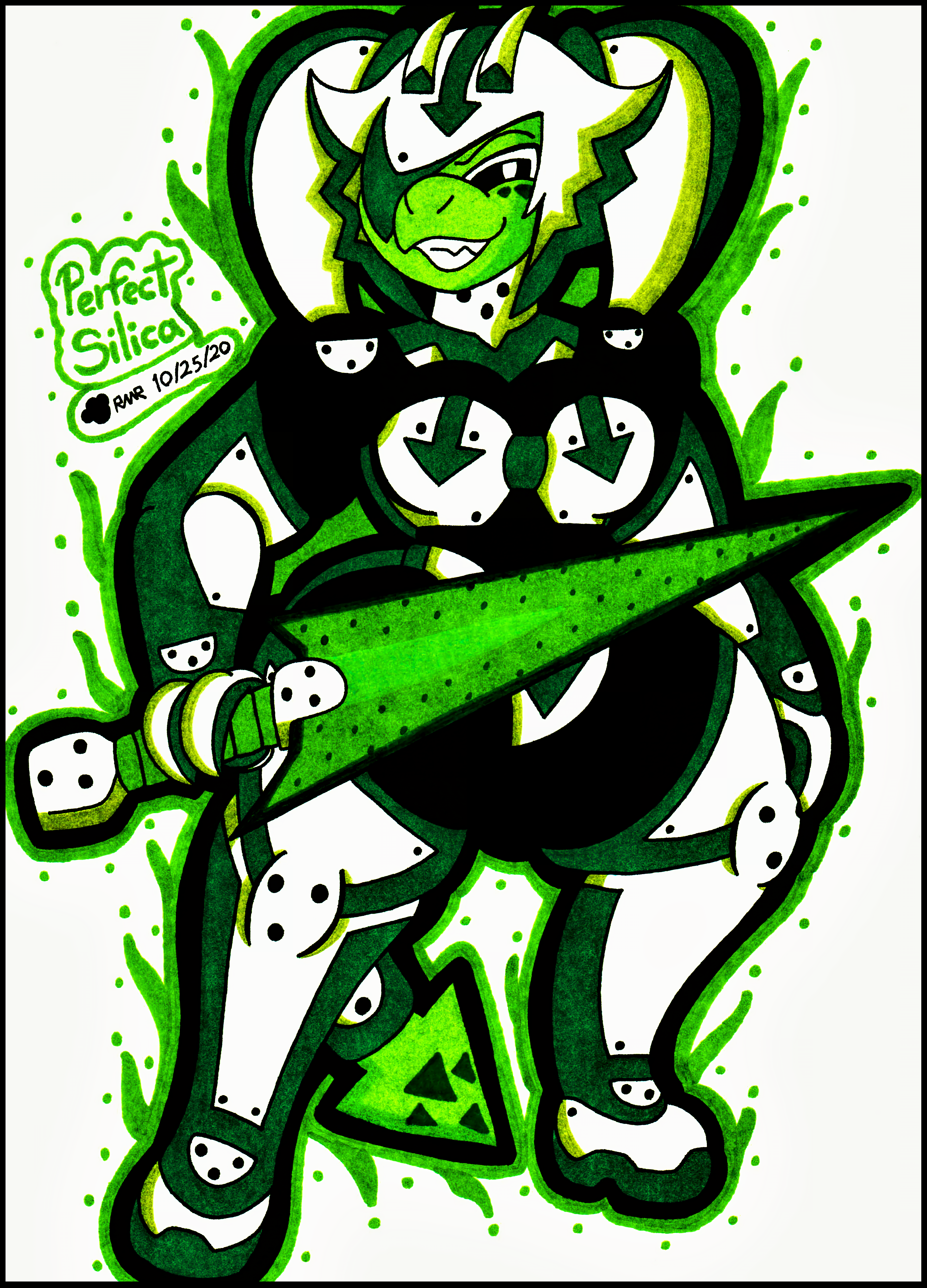 Well look at this, Silica Nexus again, for the 4th time in the same month?

Call me nuts, but I’ve kinda really rediscovered by investment in this little Android Kobold.

But, I promise this’ll be the last picture of her for a little while, as I do need to redesign and make more characters in her universe.

For this piece in particular and why it happened, I have been recently playing through the Mega Man Zero/ZX collection.

I’ve made it obvious that Silica’s main inspiration was Classic Mega Man/Mega Man X, but after playing the Zero games, I really wanted to redesign her into something more like Zero.

So I used this opportunity to replace her buster arm with an angular beam saber.

I also gave Silica a black under armor suit to wear, as if I want her to be taken a bit more seriously, perhaps she should look a little more “battle ready”.

Work on this piece was relatively smooth, the reference I used worked out pretty nicely with what I wanted.

The pose was a tad more dynamic, which is good for practice, and that beam saber turned out far better than expected.

Other than the small redesign to Silica’s armor and added saber I think this design works for her greatly.

For the sake of fun, let’s just say this is Silica’s “Perfect Mode” and leave it at that because I don’t think she’ll need another redesign (or a better weapon) after this update.

It has been a long while since I have recorded my thoughts like this, but with everything that is going on, I think I need to have this on record.

I feel awful about this, but I haven’t been 100% truthful with my daughter- I mean, Miss Silica Nexus.

You see, while I did state publicly that Silica Nexus would be my last Battle Aniloid project, I didn’t ever say just who were the people involved with me in this project.

My name spread around the Serpentine Galaxy as a leader in Battle Aniloid tech, and that caught the attention of the Dragoons.

I was shocked when I was informed about Nexus Systems would be working with them on my latest project.

It was always rumored that the Dragoons were extinct, that their galactic civil war wiped them all out, but no, they live on.

I met with Her High Primus, Lady Jadius, a high ranking Dragoonian scientist.

When she found out how I managed to get the Polymorphic Metal to work for my previous 9 creations she just had to get in contact with me.

Jadius told me that the element of Maxanium; the Polymorphic Metal itself was what the Dragoons discovered as a “Bio Metal” many eons ago.

This material mixed with the universal power supply of Aeon is what makes Maxanium polymorph in the first place.

I was able to discover this on my own and create cores in my Battle Aniloids that allowed them to turn their armor and weaponry into anything they wished, but I still felt I could push things further.

That’s where Jadius lent me her and her team’s help.

I was taught indescribable alien knowledge, and learned the inner working of their science.

Not to mention, having raw Maxanium and pure unfiltered Aeon at my disposal, the sky was the limit.

It took what seemed like 10 years and roughly 5 prototypes, but I was able to perfect Silica Nexus’ design.

By the time I had finished her with Jadius’ “DNA Code” the rampant space pirate attacks on Ventas had stopped, and I felt Silica was not needed for battle.

So when I activated Silica, I had turned off her combat capabilities.

Or at least that’s what I thought.

With Silica’s body and Infinity Type Aeon Core, while I could “turn off” her powers, they’d always reactivate if she was ever put into extreme danger.

This worry in the back of my head would rear it’s head when Silica’s hero mentor, Captain Cryonis was hospitalized when he was viciously attacked by a Battle Aniloid named Rezzver.

The event activated Silica’s powers and when she formed a weapon, it was so powerful that it missed Rezzver, but destroyed his small platoon in a single shot.

When Silica came back to my lab, she demanded to know why she was like this, and I had to lament and let her carry out her wish to avenge Captain Cryonis.

However, I put several limiters on Silica, as she would continue to work as a Bounty Hunter I’d release the limiters when I felt like she could handle the extra power.

For several months, she was at 85% power, and doing extremely well.

But, Rezzver had come back after Silica took down so many Cyber Syndicate bases and sadly, his back up was composed of my previous inventions…

Somehow all 9 of them were under Rezzver’s control, and my old student Theo Thorne had made himself known as Mad Thorne…

Silica tried to fight back, but she stood no chance.

She was spared her life and I had to make the difficult decision of actually allowing Silica to use 100% of her powers.

The collateral damage she left with that 1st awakened shot was terrifying, but at the same time impressive.

I couldn’t allow my creations to wreak havoc across the planet, so I gave Silica the last piece of her “Perfect Form”, the Vector Saber.

A powerful weapon given to me by Jadius herself, she said it was an honor in her customs for a Dragoon to give such an ancient weapon to another race.

Built for Silica in mind, when I gave her the sword, Silica’s body morphed into something similar, yet so very different.

I hesitantly asked her if she was alright and Silica responded with her usual sass of “Of course I am Doc, did you think I wasn’t going to bounce back?”

Of course, she was okay, I had nothing to worry about, and I was happy she finally had some Nano Mesh Underarmor on for once…

Not to mention she got a little taller too, granted she is now 5 feet tall; a whole 5 inches taller than before, but I know Silica isn’t going to complain about that.

With no longer any limits on Silica, I know that she’ll be able to handle anything in her way.

It just seems so funny to me, from going for only using her Buster Arm to now exclusively using the Vector Saber.

When Jadius told me that Silica would be able to adapt to anything, she wasn’t lying.

That Rezzver, I have a feeling I know who is behind the mask…

Theo… you bastard, turning my creations against me like this…