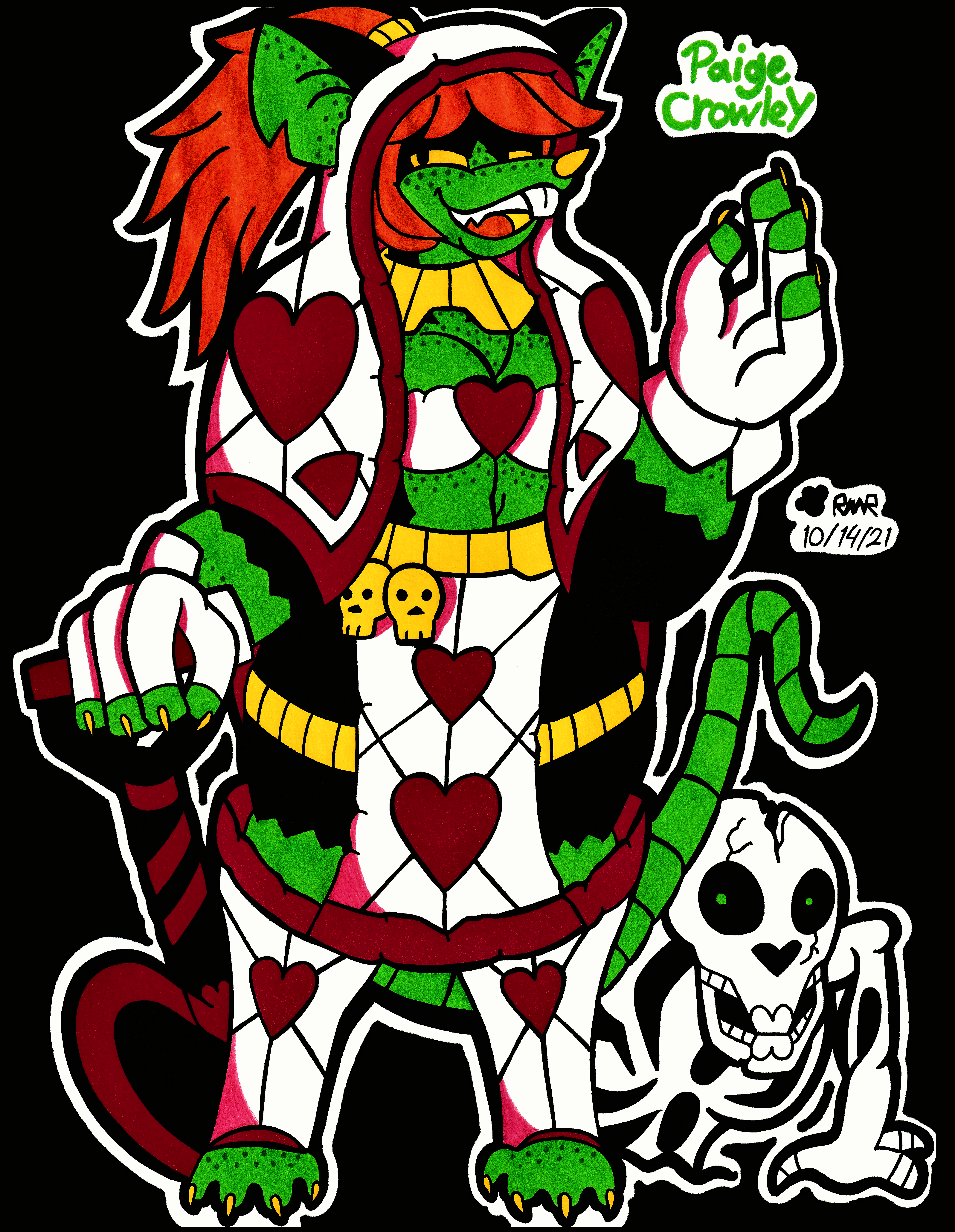 Building on top of Vivian Valentine's universe (honestly thinking about just calling it "Hellions") here in the next character on the chopping block.

This is one of Vivian's Generals, Paige Crowley, the Ace of Heart, and she is a Necromancer.

I had noticed that I very really worked with mice/rats before, so I wanted to use that animal for a character.

Plus, there is a bit of fated irony to see a Rat being a Necromancer due to all the death causing disease they tend to carry.

Work on Paige was pretty fun, I didn't really have a true design for her in my head, but I did like the idea of her wearing a shawl like a hood.

With the ponytail holding the top together and the more worn clothing, she has a bit more of a witch doctor like feeling too her.

Which, I think for her backstory and personality, it works out in Paige's favor.

The green and black fur makes Paige look a little sickly, and the white and reds of her clothing is a good contrast.

I had a lot of fun designing Paige, she looks like she belongs right next to Vivian and Xanthos.

This motivates me to work on a few more characters for Hellions.

Title: The Ace of Hearts.

In the heavenly halls of The Afterlife, Paige Crowley; an Angelo of the Second Sphere, was born into existence.

Paige’s heavenly duty was to use her astonishing powers of granting life to those mortals that she thought deserved a 2nd chance at life.

Her only restriction, was to never visit the Netherworld, or give extended life to Hellions on the Surface in disguise.

Being ever obedient, Paige would do this for a long 2300 years.

And after so very long of doing this, Paige was ever so dreadfully bored.

In her spare time, she’d research what the Netherworld and the Surface were like.

The more she learned, the more she realized that despite its reputation, the Netherworld isn’t as awful as it once was when she was young.

As for the Surface, Paige thought it was unfair just how hard mortals had to suffer for “salvation”.

Allister was one of the few Angelos that would freely mingle in the Netherworld due to his title as an Angelo Enforcer.

He told Paige more and more that she never would have been able to learn from a book.

Allister would take Paige down to the Netherworld for at least one night of fun, and Paige absolutely loved it.

Unknown to Paige, Allister was just using her, in order to steal her book of notes and gain access to the Heavenly Weaponry.

He stole a very powerful sword and fled the Afterlife in general.

When Paige woke up, she was caught by the High Ones and was put on trial for her crimes.

She pled her innocence, however the forged evidence was too damning for her to really do anything.

Paige was punished by having her halo cracked, and her wings chopped off as she was tossed out of the Afterlife.

Paige would awake in the Bloodland Bog, being gnawed at by some wretches.

She was able to find herself a shovel and fight back long enough to escape off further into the bog.

Paige was having to get over the sheer pain of her missing wings, and splitting headache, she’d wander into a clearing.

As Paige took shelter, she’d come to the realization that she could no longer give life to plants and others anymore; but instead, give life to the dead.

She had read about Necromancy in her time in the Afterlife and heard how powerful they could become.

Out of anger and spite, Paige would practice her powers on raising the various dead that lay rotting within Bloodland Bog.

She’d make a large hut where she’d live for the next 100 years.

Throughout the years she’d go from town to town, raising the dead, and attacking smaller towns to make more dead.

Paige was now ready to move on from the Bloodland Bog and find more creatures to work her magic on.

Withing days of walking, she’d find a new town to harvest, and it was newly constructed too.

Paige was about to sic her growing legion of undead on the town, but was suddenly stopped, by some type of parasitic monster dressed as a knight.

Caught extremely off guard by this attack, she’d try to flee back into the woods.

Yet she’d be stopped by a snow-white rabbit vampire.

“You seem a little too powerful to be left unattended.” before Paige could strike at the rabbit, she’d be knocked out by a swift kick to the gut.

Paige would wake up in Castle Valentine jail, with the white rabbit waiting.

She introduced herself as Vivian Valentine, owner of this castle, and new town.

Paige would wonder if she’d be killed that night, but Vivian shook her head, and offered Paige a job instead.

Vivian had heard rumors of a Fallen Angelo Necromancer lurking in a bog, and she wanted to see just how powerful Paige was.

At first, Paige refused, she didn’t want to be under direct control of anyone ever again.

However, when Paige was shown off the vast library in the castle, full of spell books, Paige changed her tune.

Paige would join Vivian, but only on the condition that she’d still be able to hunt down the bastard that ruined her old life.

So, in the courtyard, Vivian would spar with Paige, asking her to not hold back and to “pull out every trick in the book.”

The two would fight, and Vivian was impressed, the sheer volume of undead and spirits Paige could summon, and how easily she was getting overwhelmed; Vivian knew Paige could hold her own.

Satisfied with the result, Vivian made Paige one of her General, the Ace of Heart.

With that, Paige had a new home, and a bigger place to study her Necromancy.

That, and she had a large army of undead to hunt down Allister.

While it’s been 1,000 years later and Paige hasn’t found Allister yet, she had gained some much-needed friendships with Vivian, her other generals, and the Castle Valentine soldiers.

It makes Paige feel less alone in the Netherworld, and can say safely that she is glad that Vivian stopped her that one day from making a mistake.

Out of the three Generals of Valentine Castle, Paige comes off as the most unprofessional.

She tends to do as she wishes, mostly staying in the Dungeon, mixing potions and experimenting on corpses.

While this could be seen as a negative, Paige’s workaholic nature does produce some interesting results.

However, at the same time, Paige gets a little irritated when she is dragged away from her work when it’s almost finished.

Also, Paige can come off as a bit crass and cynical at times.

She’ll often pick apart new recruits, making sure they are fighting for Vivian’s caused and not attempting some rebellion.

It can make her hard to deal with, but Paige will swallow her pride and apologize if she sees said new recruits prove their worth.

Paige also likes to make colorful jokes and very casual cursing around others.

While very unlady like for Vivian’s liking, this made her a little popular with some soldiers, as they tend to repeat her jokes around the castle.

That, and Paige is the one that deals with extorting information out of some prisoners.

She’ll usually use the prisoners for experiments if Vivian isn’t feeling particularly merciful that day.

However, despite some of Paige’s more negative traits, she does have a bit of a softer side.

Despite being a Necromancer, she still can grant life like she could as an Angelo.

She tends to play double duty as a makeshift Medic for the sake of practice.

All of her healing potions can be used in a pinch for more injured troopers, or Paige herself can directly heal others.

Also, Paige has a natural green thumb because of her healing.

Originally she kept it a secret that she was the one that tended the flowers in the courtyard, but when she saw people using it as a lounging spot, she eventually told everyone about it.

Being a Necromancer, Paige using the bodies and souls of the dead to do her bidding.

She can combine different body parts and bones in order to create some truly abominable creations when she needs something stronger than skeletons and zombies.

Paige can also use ghastly souls to possess others and use said ghosts to cause havoc.

For more utility purposes, Paige can use souls like batteries to place them into weapons and armor in order to make them enchanted with various powers.

She’ll do this for the sake of the soldiers, giving them more powerful weapons at their disposal.

Paige also has a handy bladed shovel that acts her weapon of choice.

She can use it’s short portable mode for quick swipes and jabs.

When Paige extends the shovel, it can be used like a spear.

She is quite efficient with rapid jabs and pokes, proving to others in the Valentine Army and foes alike, that she isn’t some frail and brittle Death Mage.