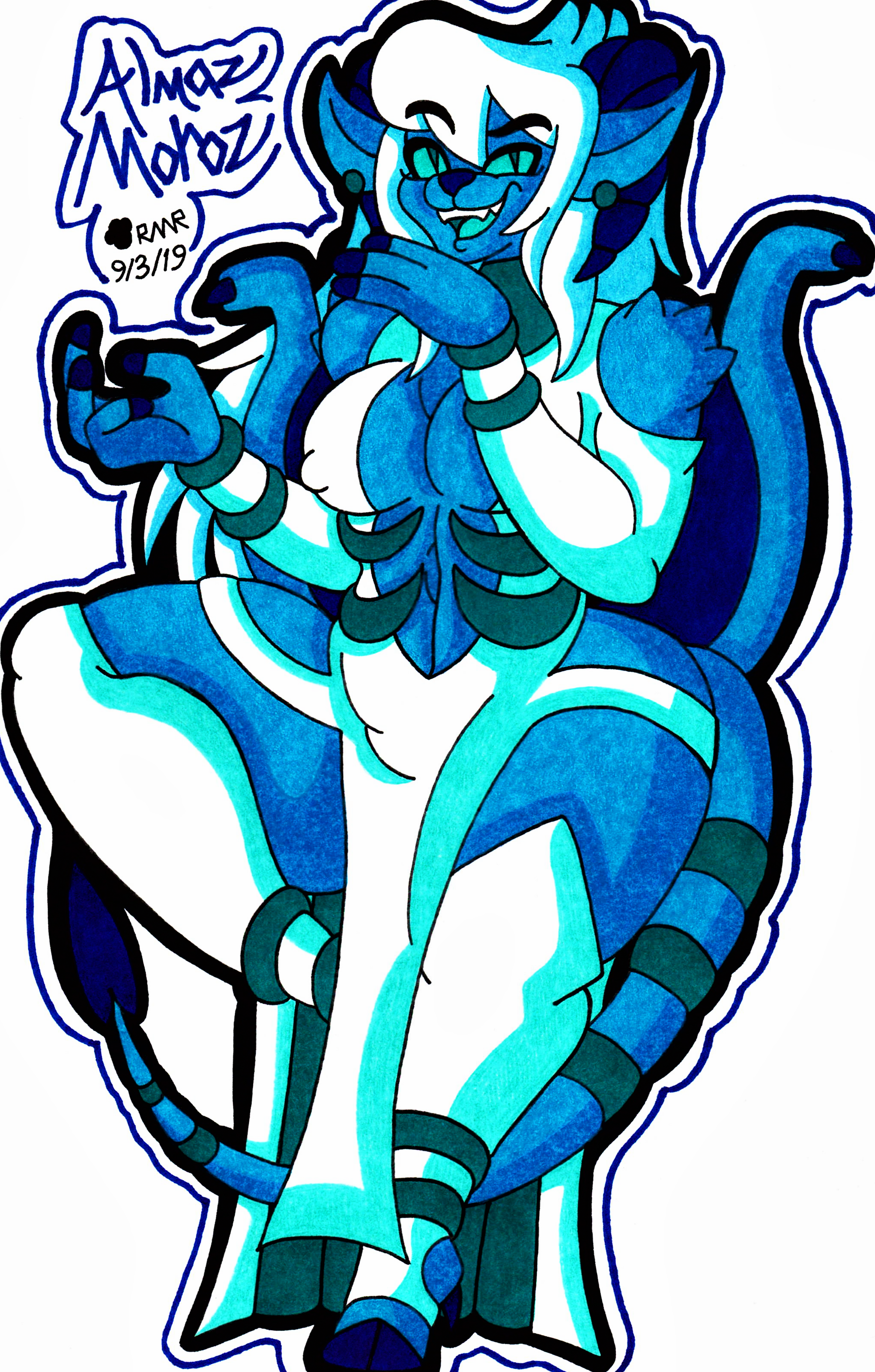 Mistress of the 9th Circle

You are already 4 years old and I've only drawn you a small handful of times.

Well, at least I finally got around to her now.

Gave Almaz a small update to her outfit and changed her wings slightly, and make her arms much smaller.

Other than that this is pretty much the same Almaz.

I felt bad that Chocolate stole her spotlight, so I just had to give her a comeback too.

Age: Too old for mortals to even bother counting. (Appears to be in her 30's)

Height: It varies as she can change it freely. (She tends to stay near the height of 7' feet tall)

Species: Ice Demon. (Was a Sheep before she became demonic)

Occupation: Mistress of the 9th Circle of Inferno; Treachery.

Weapons: Her whole body is her weapon. (Mainly attacks with ice magic and ice spears)

Almaz Moroz was born an angel in the highest level in Paradiso where she would act as a gatekeeper to allow certain people to become angels and let them see what true paradise was.

However, being a guard for the final gate of Paradiso was incredibly boring for Almaz, so eventually, she started getting others to do her job for her, as she'd sneak to attend her own private matters.

For the next few centuries, Almaz would continue to partake in sinful activities.

She would often go down to the realm of the mortals to drink and party with the others on the surface world.

Almaz would also seek out smaller lesser demons and cause them torment, often making them her slaves just because she could.

Her worst offense was trading secret entrances to Paradiso for the demons for riches, gold, and whatever else she wanted

Eventually she was ratted out by her angelic sisters and put on trial for all the awful this she has done.

Almaz was proven guilty, as her wings were chopped off and cast out of Paradiso and fell into the Inferno.

For her treachery to her own home, Almaz fell down into the very final level in Inferno, the 9th Circle of Treachery itself.

Almaz fell into the giant frozen lake of Cocytus, freezing her skin when she fell in, bleach her hair into an eerie snow-white color and making her skin blue and frozen.

Within her own lonely hell, Almaz was stuck within her frozen wasteland forever to be abandoned.

However, she saw this as a chance to make the 9th circle her very own, as she was one of the very few sinful enough to be plunged into Treachery.

Feeling the hatred for getting caught of her sinful acts she was able to harness her new demonic powers of icy magic, as cold and bitter as the hate in her heart.

Using her newfound powers, she crowned herself "Queen of Treachery" and use the Lake of Cocytus as her main means of punishment, tossing in sinners to freeze underneath the lake, or stick them in the lake waist deep or head deep in the frozen waters.

Throughout her punishment to sinners, Almaz has become incredibly powerful, often leaving her dominance to cause trouble in the other circles by stealing other sinners from the other circles and toss them down into Cocytus.

The other demons within Inferno do not dare get in Almaz's way when she is seeking more sinners, or is after something that she wants.