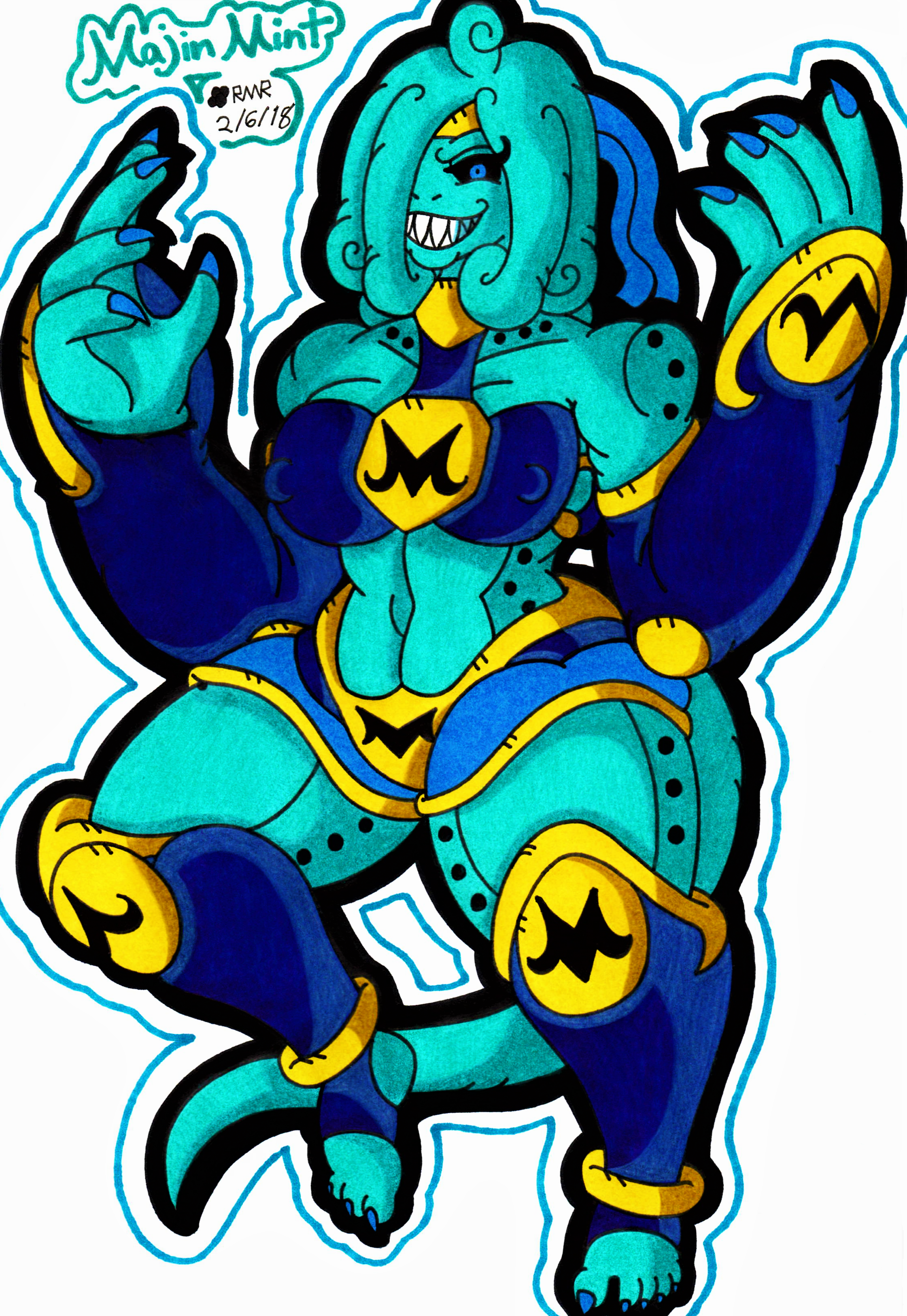 Here is Majin Mint again, this time in her most recent design.
Dragon Ball FighterZ was out by this time and I took a liking to Majin Android 21's design.
I took 21's tail and put it on Mint in order make her look more animistic.
Also, I chanced her clothing to look wilder, and gave her larger hand for combat.
I should revisit Mint soon, seeing how the new Broly Movie is going to be out soon.

I'll leave Mint's bio/story stuff if anyone is interested

Relatives: Her adoptive mother and father plus 3 siblings.

Fighting Style: Mint's fighting style is incredibly unorthodox and wild.
She incorporates her stretchy limbs and tail for a flurry of rushdown attacks that tend to overwhelm her opponents.
The closest thing most of Mint's caught bounties can describe her fighting style is that of "Dirty and Unfair Kickboxing".

Universe 6’s Majin Buu:
In the beginning Universe 6 was created, and then so was the unholy creation that was Majin Buu came into existence as well.
Majin Buu was not normally very violent, so long as she was left alone to her “playtime”.
However, the Kais didn’t see her “playful practices” as things that could be called “harmless”.
Majin Buu, for whatever reason, gotten herself rather angry and started to start destroying random parts of the Universe at a rapid pace.
Seeing no way to stop Majin Buu on their own, the Kais begged for help from God of Destruction Champa for some assistance.
To their dismay, Champa was busy sleeping, and wasn't to be woken for the next 100 years.
On their own with only their wits the Kais held a mock tournament where all of the Kais would challenge Buu to a fight.
Buu took the bait as she and the Kais did battle.
This idea quickly dissolved as Majin Buu started to absorb some of the stronger Supreme Kais of the North, South, East, and West and going on an absolute rampage on the Kais’ home-world.
Wanting to keep Buu’s destruction from spreading to the other parts of the Universe, the Grand Supreme Kai in her last hope grabbed the scarred Sealing Saber in attempts to kill Majin Buu.
Both fought long and hard but the combined strength of all of the Kais that Buu absorbed were far too strong for Grand Supreme Kai to handle all by herself.
In a bizarre turn of what could only be fate, the Grand Supreme Kai tried reasoning with Majin Buu’s soften side that was gained by absorbing the other Kais; to her surprise, this tactic worked as Majin Buu was having difficulties trying to finish off the Grand Supreme Kai.
In Buu’s moment of confusion, the Grand Supreme Kai split Majin Buu in two, one side being Buu’s Pure Evil and the other being Pure Innocence.
With both Buus still trying to process what just happened the Grand Supreme Kai then quickly struck down the Pure Evil Buu in the blink of an eye.
Instead of destroying the other half of Majin Buu, the Grand Supreme Kai could feel the purity in Buu's heart, but Buu herself was far too ashamed of her horrific actions to continue on living.
Majin Buu asked the Grand Supreme Kai to split her into pieces with each piece of herself representing each of the Kais she absorbed and leave them to be raised by some of the universe’s kindest races.
With Majin Buu’s final request, it was done by the Grand Supreme Kai; the evil of Majin Buu was silenced forever.
In her sacrifice, the Majin race was created in Universe 6.

The Birth of Majin Mint:

One of those children of Majin Buu was the youngest and smallest child, Majin Mint who is the representation of the Western Supreme Kai.
Mint was to be raised on the planet Yardrat to a couple that was incapable of having children.
In her early childhood Mint was very loved and looked after in her small village where she was taught the many time and space manipulative powers the Yardratians.
During the training of her Ki, Mint’s parents realized that she had the most difficult time on controlling her own enormous power.
Her body produced far too much Ki for her body to maintain consistently and would often overflow from her body and cause Mint major fatigue if training sessions lasted too long.
If Mint's emotions ever got the better of her, the Ki would flow out and cause damage to her surroundings.
This caused many of the other children to avoid Mint out of fear, causing Mint to not have many friends and becoming a bit of a tomboy in her teenage years.
In order to help control Mint's Ki, her father personally trained Mint on how to conceal her Ki.
It took Mint many years to learn how to suppress herself to the point where she'd be able to control her Ki at will.
But at the age of 16 Mint was a natural at controlling her Ki, and was trained by other Yardratian warriors to prove to her father that she was truly in control.
Wanting to make a difference in the Universe and somehow repay the kindness her parents gave her, Mint left Yardrat in the hopes of becoming a Bounty Hunter.
She started out rather small and was struggling to get any bigger busts as her smaller size made her look like a joke compared to the other more seasoned bounty hunters.
Mint’s struggle didn’t last too long for when she stumbled across some Saiyans that all changed.
She joined their team and went under training with them for the next 10 years.
With that one single decision, she has had major success and had learned to become a feared bounty hunter within the criminal underground as the “Tiny Tart Terror”.
She would eventually leave the Saiyan party of mercenaries and started taking bounties by herself as Mint felt she was ready to finally be on her own.
Now at the age of 26, Mint continues to hunt down some of the universe’s nastiest and most despicable criminals and turn them in for a profit.
Occasionally, she takes short breaks to visit her parents back on Yardrat.

Being raised on a peaceful planet, Mint’s personality reflects her upbringing on Yardrat.
Despite her intimidating looks Mint is incredibly kind and caring to the less fortunate.
She is well-known for even taking very low paying bounties just to help out that natives of whatever part of the universe her jobs takes her to.
Thanks to her candy beam she is able to help feed some of the poorer families she comes across; as well as splitting her bounty money to the locals.
Despite her kindheartedness that doesn't mean Mint can't work her way around the criminals.
Many times she has been able to trick and manipulate them, mainly with her sex appeal.
However, if Mint isn’t feeling that playful or coy and the criminal at hand is rather dubious, she’ll manly cut straight to the point with them and give them the choice of going with her quietly or having to do it “the hard way”.
Whenever Mint isn’t hunting bounties, she can usually be found in local bars and taverns hanging out with the locals, or eavesdropping on some new possible bounties to round up
Mint then uses said money to engorge herself in a mountain of sweets, where 33% of her funds goes into.
Mint also dabbles in a small bit of baking and cooking, she isn’t the best at it, but she feels her sweets taste much better than anything she could buy or create with her Candy Beam.

I love the way you drew your character, she looks very amazing and unique

Thanks man.
I always had a thing for Female Majins, so I wanted to make my own.
I need to draw Mint again sometime soon, it's been forever.