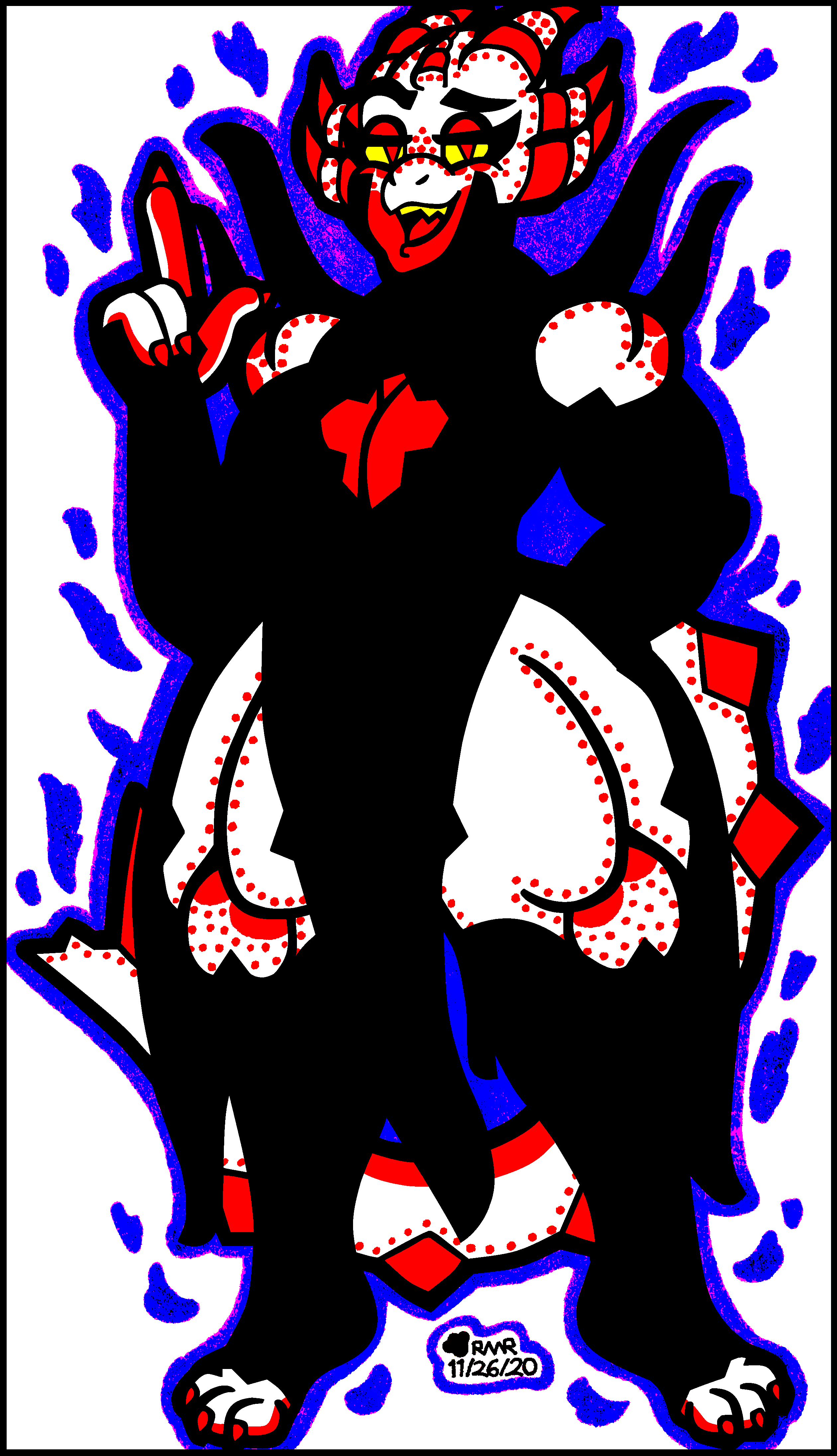 It's been a little while but here is a more update piece of Jia Jing Fei with her Blight Dress in full review for once.

This piece was mainly made in order to update Jia, both her body and her bio info that'll be placed in the description.

Just have to say I'm very pleased with this picture, just everything about Jia turned out nicely, from her anatomy in general.

I finally got Jia to a more consistent look, with those Chun-Li thighs I love.

But if you all have seen my artwork long enough, you know I don't need much reason just to go back and draw Jia again.

Within the beautiful walls of the Sphalerite City lays the ruling figurehead family of the Jing Fei clan.

The Emperor and Empress were blessed by their loving daughter, Jia Jing Fei.

Jia was born a rare white scaled and red spotted Kobold which was seen as a sign of great luck to her family.

In the history of the Jing Fei family these Kobolds are some of the most powerful members of the clans' 3,000 year lineage.

These Kobolds tend to be directly liked reincarnations to the ancient guardian dragon of Sphalerite City; Huolong.

Thanks to this ancient dragon blood flowing in Jia's veins, she was granted with the powers of Pyrokinesis.

At a very young age Jia has difficulties controlling her flames since they are directly connected to her emotions.

Because of this fact, Jia very quickly had to learn to repress her emotions in order to keep her flames at bay and not accidental burning her subjects.

Jia trained with her mother and father from many years in order to control her powers.

When training Jia quickly realized that she was immune to getting burned by fire, and was able to absorb flames to make herself stronger.

As Jia aged and finally got to grasp her powers and controlling her flames and other open flames at will Jia asked for further training with the Fire Lotus Alliance.

At first, the Emperor and Empress were worried, as the Fire Lotus Alliance tend to get into direct combat with bandits, possible invaders, and the seedy Black Lotus Cult.

However, with Jia's very calm and even tempted personality they both said yes, allowing Jia to finally get that much-needed actual combat use of her flames.

From then on, Princess Jia Jing Fei became a high ranking member of the Fire Lotus Alliance, hunting down the Black Lotus Cult from her country of Chun-Nan.

He was picked to join due to his skills in hunting down Black Lotus members and his unique explosive flame pyromancy.

While Rick was on the tad cynical side with some anger issues, Jia was able to get though to Rick, as well as finally getting to see his softer side.

As the year went on, the two would later get married in a semi private matter within Sphalerite Palace.

Today, Jia is still within the Fire Lotus, working alongside her friends she has made there and his loyal husband by her side.

Not to mention, Jia in general loosening up emotionally quite a bit to be a little more playful.

Jia Jing Fei is a noble soul, she is normally very calm and level-headed, but tends to conceal her true feelings.

She is often described as elegant, which is demonstrated through her body movements and her Kung Fu.

Being royalty, Jia is quite mannerly and typically maintains a relatively quiet, stoic and formal air among others.

She tends to have body language less casual than most others, always standing tall and straight, carrying herself with pride.

She also usually speaks in a polite and lady-like tone.

While honored of her heritage as royalty, Jia is down-to-earth and dislikes being called by her title.

Jia gives the impression that she keeps her emotions in check, she is inwardly highly emotional.

She possesses a fiery temper, and when she rarely loses her composure she is quite frightening, aggressive, harsh, and prone to making bad decisions.

She is similarly very serious about her position as princess and role in the Fire Lotus Society as when dealing with enemies, she never holds back her strength and is not above the idea of using lethal force.

Her intensive demeanor however, is motivated by her own genuine concern for others' safety.

In truth, Jia has a kind heart, and always stands up for those who cannot stand up for themselves.

As of recently, thanks to being more social with the other Fire Lotus members, and being married, Jia has become slightly more laid back emotionally.

Granted not enough to effect her dedication to all of her hard work and training; but enough for many to see her as more casual and easy to approach.

Like a majority of Kobolds within the Jing Fei clan Jia is able to use Pyrokinesis.

Jia was born with the power of pyrokinesis, the ability to create and control fire in any way she desires.

This ability is so deeply rooted in Jia that her soul itself is alit with flames thanks to the blood of the ancient dragons.

Though Jia initially had trouble controlling her flames, she has since become very adept at using them.

Handling her flames delicately enough to creates small embers in the palm of her hands or defrost frozen others without harming them. Jia's control over fire is not limited to her own flames, but also those in the environment, allowing her to bend foreign flames to her will.

With her pyrokinesis, Jia can conjure up flames at any place on or all over her body for various offensive effects, such as turning herself into a burning projectile, forming a cloak of flames or increase the damage to her blows.

She can even ignite and raise large columns of fire from the ground from afar.

Offense aside, she can also use her pyrokinesis defensively by conjuring up fields of fire around her as protection.

She can also use her flames to propel herself forward, increasing her speed and/or granting her limited flight. Jia's pyrokinesis also gives her complete heat resistance, making her invulnerable to all types of flames, such as those in the environment.

Thanks to this ability, Jia can absorb flames to power herself up and get even stronger because of it.

During one mission where Rick and Jia were investigating a Black Lotus trying to revive a Vampire Lord on the boarder between Aja and Eurkos.

When the Vampire Lord was detected Jia and Rick, he attempted to self-destruct to take everyone out.

With quick thinking Jia stopped the Vampire Lord, but her body absorbed the dark flames.

Jia suffered extreme Blight Poisoning and was put into a comatose state.

In this state, Jia shouldn’t have survived, but she managed to pull through.

This “dress” was created out of a parasite called a Blightling.

It fused with Jia’s body inside and outside, and she was quickly on her way to a full recovery after another week of rest.

With the Blight Dress equipped, Jia’s Holy Flames had turned violet due to the Blight and mutated into something new.

While still being holy, the violet flames can also now poison the Blight at the same time.

Also, this will allow Jia to learn how to use her more dark powers with training from her father and the Shadow Strikers.