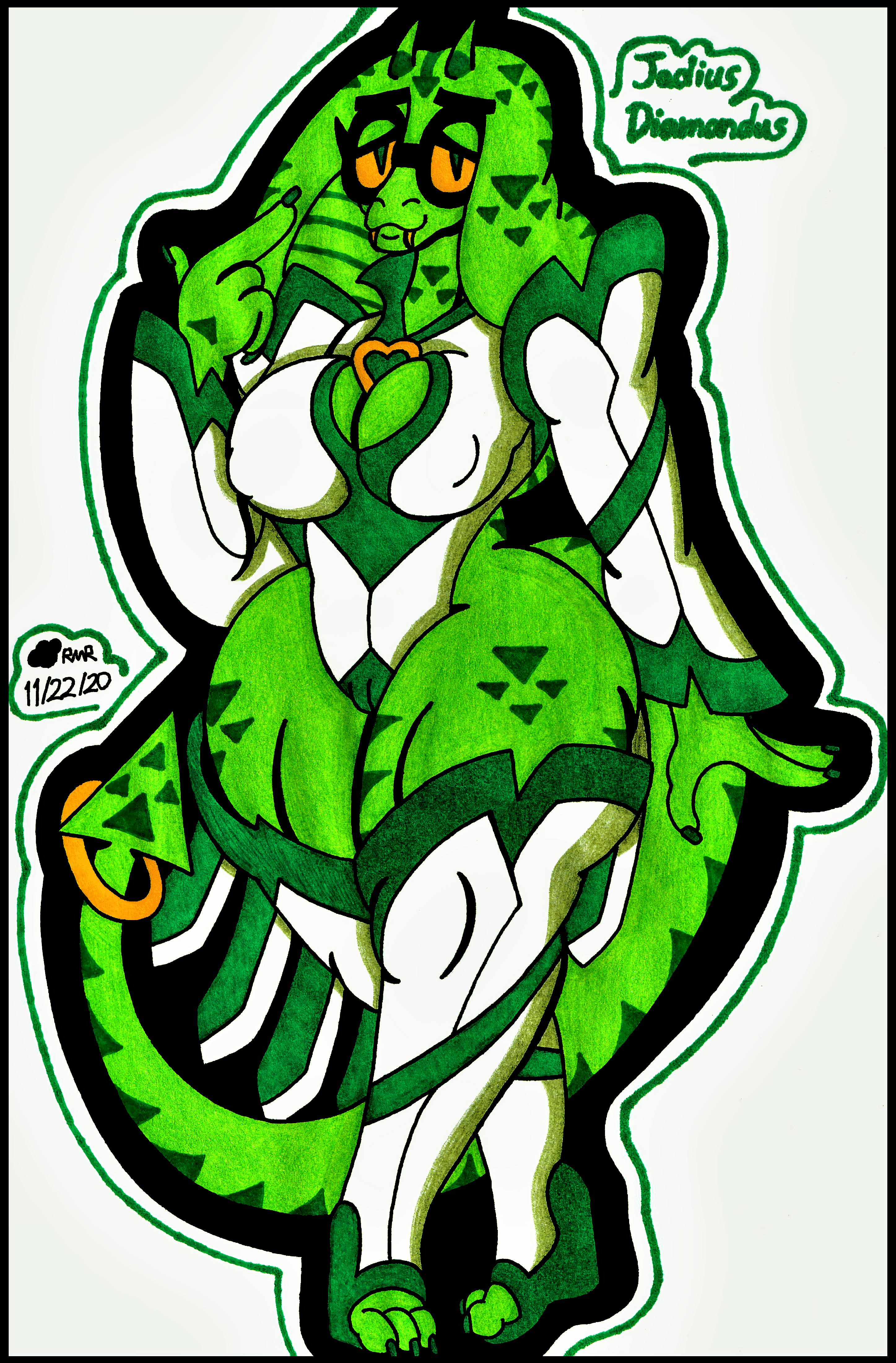 Alrighty then, I think this’ll be the last entry in the Silica Nexus universe for a little while; my sci-fi fix had been fed.

So let’s end this off for now with a sexy alien snake lady.

Wanting to show just which parent Silica got most of her genes from, you can see it’s almost all from Jadius, minus the fact Silica is a Kobold and not a Cobra.

Not to mention the similarities in Silica and Jadius’ clothes/armor and the same body markings they share.

I can’t really explain why I liked the idea of Jadius being a Cobra so much, but I just enjoyed the idea of a having a snake character in my pocket to fall back to.

That and Cobras just tend to me my favorite snakes and have rather nice anthros I’ve seen floating around the web.

This picture took a little while to finish, but I did have fun on Jadius overall.

I’m especially proud of her tall yet still curvy frame, as for a full body picture, the anatomy looks like the best I’ve done so far proportion wise.

Now that I have some free time to do this, I should take this moment to record my thoughts.

To think that the answers to all of my research, all of my schooling, and everything that had been leading up to the creation of my magnum opus; it all boiled down to romancing an alien Cobra.

After finishing my Special Police Unit Team for Devol City and being relieved of my active contract with the Special Forces; I was looking for my next subject of research.

Going back to the Council of Science for some new ideas, I ran into one of the High Primus of the Dragoons; Jadius Diamondus.

In a what I can only describe as an act of happy coincidences, the members of C.O.S were expecting me to show up.

Jadius had taken a liking to my work with my Nexus System Numbers and how I used Maxanium to create them.

She told me that it was most impressive, and asked if her team could work alongside me to create something.

I took this opportunity and agreed, as at the time, Silica was still in her planning phase and was still only a serial number in my mind.

I knew deep down that I hadn’t cracked the code on Maxanium at the time, and if only I knew just how life changing working with Jadius would become.

For the next 10 years, I would be exposed to Dragoon science and knowledge that almost seemed out of comprehension; almost.

You see, the major key to making Maxanium work is by using Aeon to give it the ability to Polymorph.

And how does this work?

Well, as Jadius told me, it’s because Maxanium is a special “living metal” that the Dragoons dubbed as a “Bio-Metal”.

This Bio-Metal needs to be controlled by a bodily core that help spread the metal throughout the body both inside and out.

The only issues I had when making the NSN series was the fact I didn’t have access to pure Aeon.

But with Jadius and the other Dragoons, that wasn’t an issue.

As progress continued with the various prototypes of Silica, I learned more and more on how to create Cores and to perfect the spread of Maxanium.

Now this is when work on Silica sped up considerably.

Jadius had presented me with the Vector Saber, a Dragoonian weapon.

Now at first, I didn’t think much of the Vector Saber, just a small one handed hardlight saber made of pure Aeon.

But it was the story that Jadius told me that made it more important.

As history tells us, the Dragoon race got into a massive civil war that ended with an almost extinction of their race.

The man who helped to end the war was a man named Zion Hyperius, a War Dragoon Warrior who switch sides to the Peacekeeper Dragoons.

Zion used this sword to fight his way into stealing the weapons needed to end the war once and for all.

It cost Zion his life sadly, and this Vector Saber was passed down to each most trustworthy High Primus Dragoon.

This was what Jadius wanted all along, so in a sense she wanted to share this knowledge and technology to recreate this legendary hero to protect the universe.

Heh, it’s funny, that sounds so much like something heroes from my childhood shows would do.

But I couldn’t help but be moved by Jadius’ earnestness, as well as eagerness to make this project a reality.

However, there was one last process both me and Jadius needed to do…

In the beginning on this audio log, I talked about romancing Jadius…

Well… There was only one way I could get Jadius’ “DNA Code” as well as making sure that Silica could actually use her powers at complete 100% capacity.

I won’t go into lecherous details, but I am a man with sexual needs and Jadius was more than willing to please mine, and her needs.

After Jadius was impregnated and Silica’s egg was placed into the final tank of pure Aeon, the other prototypes were merged into one as Silica’s egg hatched, and would grow for the next year.

Jadius sadly was pulled away to some more important matters on the other side of Ventas.

She promised me that she would return to Nexus Systems soon, and with her team working as permanent members of my team too, I knew she wasn’t lying.

I just find it ironic that as soon as things started to go wrong with my creations being turned against me thanks to the Cyber Syndicate; Jadius would reappear to me.

And right after I removed Silica’s limiters, so she could unlock her Perfect Form too.

It’ll be awkward introducing Silica to her “Mother” but I suppose that’ll be something I’ll worry about later on.

There are more important things that need to be taken care of first.