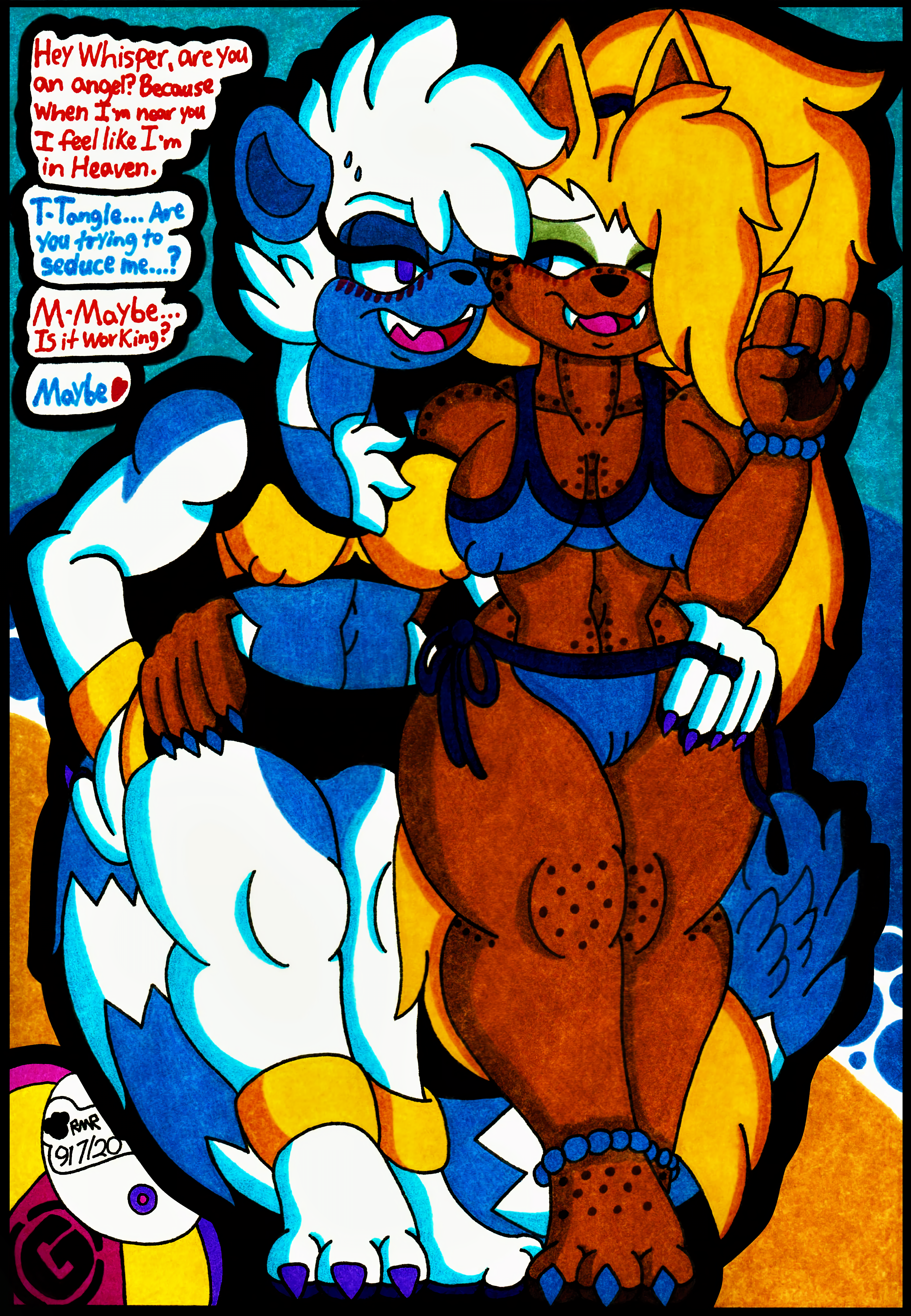 Forgive me father, for I have sinned.

Well, it looks like once again, I have found myself coming back to Sonic The Hedgehog.

It’s been roughly 2 years since my last Sonic related drawings, and back then I had started reading the IDW Sonic Comics.

I liked them so much that I drew Whisper the Wolf, a favorite of mine.

And since then I have recently caught up on said IDW Sonic Comics to this date and my opinions on it are pretty much the same.

The IDW Comics continue to be the best Sonic media in recent times, as they give me what I want out of the Sonic franchise; people that actually care about the characters and know how to write them in character (For the most part).

With that being said while I love Whisper even more thanks to her actions and miniseries, I’ve grown to also love her partner in crime, Tangle the Lemur.

While Tangle was the first IDW Sonic “Original Character” she didn’t really gel with me right off the bat.

She seemed far too much like just a “Female Sonic” I didn’t dislike her, but she just didn’t wow me at the time.

But when the Tangle and Whisper miniseries got started and the Metal Virus Saga got into the meat of things, Tangle really showed what she was all about.

The rapport Tangle has with Whisper just invested me so quickly, everything just was so genuine and I straight up wouldn’t mind just reading about these two characters alone.

I’m aware that the word “shipping” will mark you for death in many large fandoms, especially including the Sonic Fandom.

But goddammit, I won’t spoil what happens with Whisper and Tangle in the miniseries and the aftermath of the Metal Virus saga.

However, I will say that the relationship those two built up paid off and it felt so rewarding to see it happen.

I don’t know if these two will actually end up with each other in the comics.

It’s being pushed for sure, but I suppose we’ll have to see if Sega will allow it.

As for the picture itself, I wanted to use this as an excuse to draw more couples pictures as well as practicing a more accurate Sonic styled anthros; or “Mobians” as the fandom calls them.

I tried in a first attempt to make Tangle and Whisper to look as close as possible to their original designs.

However, I couldn’t make it work, so I winged it as best I could.

They both do have some curvature, but I didn’t want to go crazy with the sex appeal.

That being said, that doesn’t mean I didn’t have Tangle be naughty by sliding her fingers in between Whisper’s bikini bottoms while her tail tugs away at the spaghetti straps at the same time.

I just liked the idea of Tangle trying to hit on Whisper, and while Tangle knows it’s corny Whisper would still be faltered by the advancement.

The coloring for this picture did take a little while, mostly for Tangle ironically.

Despite her simple colors, I found many pictures of Tangle for reference, and all of them were colored differently, as well as using different fur patterns.

I combined the official reference as well as a few NSFW pieces to get the colors I needed.

Grey and Light Blue worked rather decently for Tangle’s body, and I’m proud of the way I was able to blend the colors.

The rest of the picture went pretty smoothly, and it’s nice to see that I can handle the Mobian style pretty well when I need to do it.

Any excuse to draw Whisper and Tangle together being an adorable couple is good enough for me; this is a ship I’m willing to go down with even if it doesn’t set sail.

I hope to see more of them in the comic’s future.

(Feel free to ignore the following, but I wanted to write down some of my normal “character notes” for Tangle and Whisper.

I kinda was toying around the idea of a Sonic AU where Tangle and Whisper became G.U.N Agents like Shadow and Rouge.

Maybe if I like it enough I could use this as a reason to revisit Tangle and Whisper.

Spoilers for the Tangle and Whisper miniseries below.)

From going to bashing up Robuttnik’s Badniks up in my free time from village to village, to becoming an agent for G.U.N as apart of the Anti-Eggman Unit.

I guess it all wouldn’t have happened if I never met Whisper.

From teaming up with her on multiple other occasions, to even helping her hunt down and kill her old traitor teammate Mimic, me and old Whisper have been through the wringer.

No matter how bad things got, we always had ourselves a back up plan.

I just find it so funny that G.U.N approached us first to become recruits of the new Anti-Eggman Unit.

The lady that came to us was Rouge the Bat, and boy, I’m sure any guy would die for a gal like her.

She sadly was much more interested in getting Whisper to join, but she refused at first.

Whisper only agreed to join G.U.N if I came with her, and shockingly Rouge agreed!

That was so adorable of her to do, I could have sworn I felt my heart grow two sizes that day.

That training was super rough, Rouge was nothing to sneeze at as getting kicked by her legs felt like a crowbar to the back.

As for Shadow… Oh buddy, does he not hold back on the sparring at all! He was very impressed with both of our skills but I feel like we just barely scraped by...

Thank goodness I spared so much with Whisper in the past, I felt like she prepared me for the stuff Shadow was going to pull…

It does feel good to be helping out on a larger scale for over a year and a half now, but if there is one thing I love most about being in G.U.N (other than finally having some money), is having some time off to spend with Whisper; all alone.

I had taken Whisper off to Sunny Shores to have some fun in the sun, and maybe to uhh… make my move on her.

She might be shy, but damn when she is in action Whisper is just cooler than cool!

I never pushed Whisper on the romance option mainly out of fear of getting rejected, and maybe ruining our friendship, but I had to take a chance.

But to my shock, she laughed and thought it was cute.

My hands and tail might have started cashing checks they couldn’t afford on Whisper’s bikini bottoms, but I felt her hand on my hip, so I knew I was in the clear.

Whisper has just been through so much heartache, she has her doubts of sadness and it kills me inside.

The thing I want most is for her to be happy, as well as to see that adorable smile of hers.

And, I hope that together, I can help Whisper through all of her problems.

For so long, I have been on my own since the Diamond Cutters had… “disbanded” thanks to Mimic.

For years, I had been fighting against Eggman’s forces with extreme prejudice, waiting for my moment to take him out.

While I was hunting for Mimic, I ran into Tangle.

She was just an adventurer who desperately wanted to tag along.

I always told her off because I’d rather not drag anyone into my mess, but she clung to me like glue.

At first, I thought it was annoying, but I’ll admit, it felt nice to be traveling with someone again.

We had our ups, and our downs, but no matter what, Tangle stuck by me and gave me my space when I needed it.

The fact that with Tangle with me we were able to finally kill Mimic was such a relief off of my mind.

I… don’t like having to do executions on flesh and blood, but Mimic was too dangerous to be left alive; I know what he is capable of first hand.

Shortly after Tangle and I got rid of Mimic we were approached by a G.U.N Agent, Rouge the Bat.

She was impressed by a lone duo taking out someone like Mimic, as well as many Eggman bases.

Only I was chosen, but I told Rouge that I’d only join if Tangle came with me.

She agreed, and the next year of our lives we’d undergo intense training to join the Anti-Eggman Unit.

Rouge was a great teacher, and while Shadow was a bit rougher, he taught me many things about the Badniks I never knew about.

After almost a full year and a half of training and missions, Tangle wanted to take me to the beach.

I knew what she was doing, I know Tangle has feelings for me.

And I’ll confess, I do too, I just… never knew how to tell her how I feel.

I talked to Shadow about this, and he told me that the risk was worth taking.

When I talked to Rouge, she had found me one of her smaller bikinis to wear.

It was very… skimpy, but I was willing to wear it to catch Tangle’s eyes.

I knew it worked when I disrobed that Tangle could barely keep herself from staring with her mouth opened drooling.

She told me such a cheesy pick up line and I couldn’t help but laugh at how corny it was.

I felt her hand working its way to my bikini bottoms, as well as her tail being naughty.

For Tangle, I’ll be willing to open my heart up again, it just feels so… right with her.

Without her, I don’t think I ever would have come out of my shell.

be quoted, on the way to the pier.

Ahh, yes.
I could see these two making their way to the pier to get a good look at the whole beach.