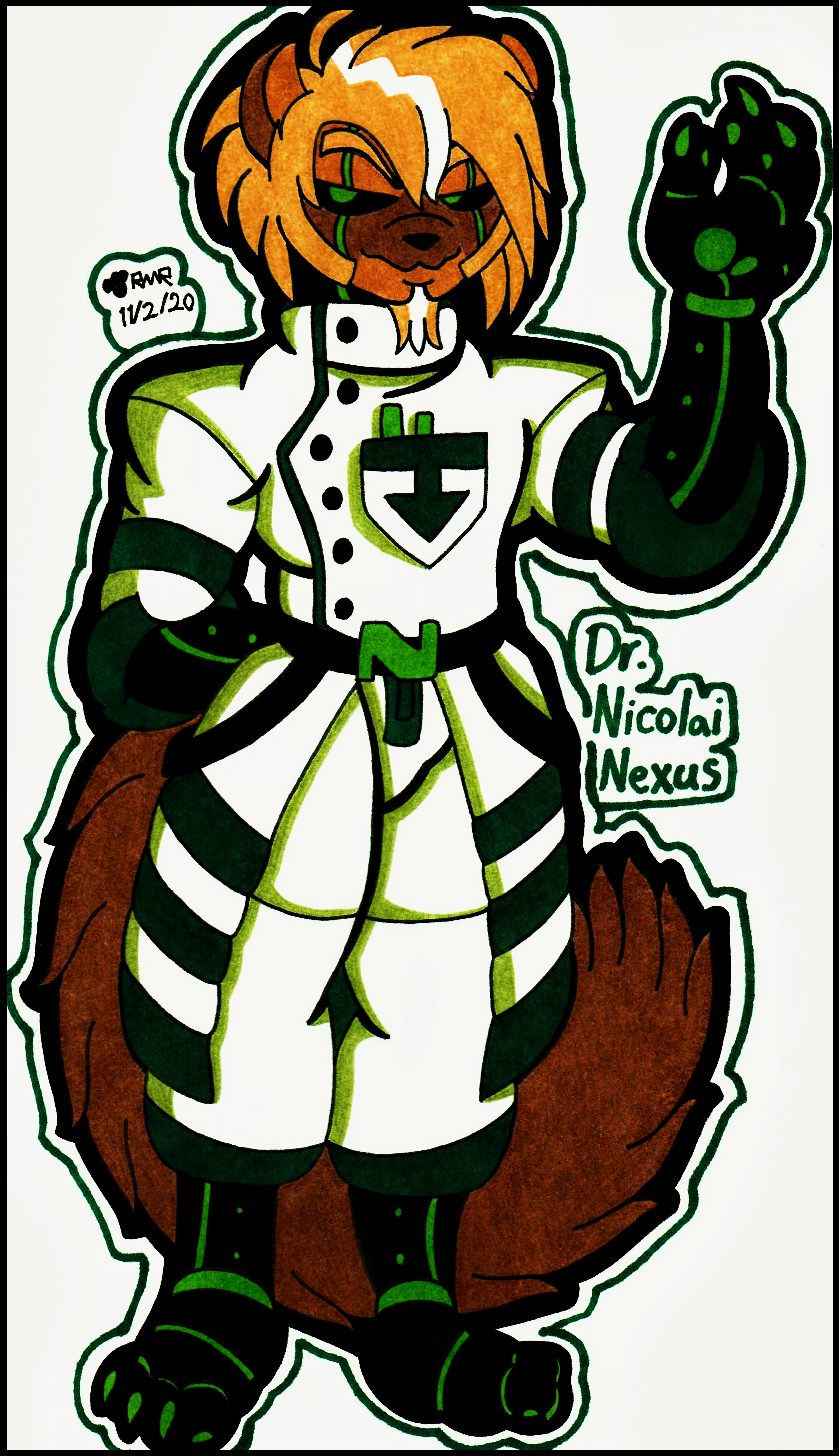 With Silica's design charged for hopefully the final time, let's finally move on to something different.

I never drew him again after his creation, so I decided to update his look since I've "restarted" Silica's universe and changed everything to anthros.

Previous Nicolai looked a little too boring to me, so I spiced him up a little more to really sell that "Mad Scientist" look.

While he might look a little villainous, I do love to subvert expectations, plus it was fun to show off Nicolai's cybernetics.

That and his more typically Mad Doctor outfit with the mostly white and touches of green really pulls this piece together.

I was going to give him goggles, but with his eyes being augmented, they'd seem kind redundant.

Overall, I enjoyed this piece greatly, as it was good to get some well needed male practice in for once.

Nicolai Nexus is a name well known within Devol City.

Even since he was small, Nicolai would watch cartoons of giant robots and heroes for long periods of time.

This would be the spark that would drive Nicolai’s interest of combining the two things he loved.

At the mere age of 7 it was quickly noticed by his parents that young Nicolai had a gift for tinkering.

Nicolai would love to find random junk around his hometown and take it home to take it apart and putting them back together.

Wanting to see him seize his future, Nicolai’s family would move to Devol City and enroll him into The Devol Academy of Robotics (D.A.R).

He would spend all of his schooling there, quickly being seen as a star pupil and would graduate at the top of his class at age 27.

Dr. Nexus would be later join The Council Of Science (C.O.S) as part of an elite group of scientist that would work on top secret inventions for protecting planet Ventus.

This is where Nicolai would meet Theo Thorn at age 21 and would quickly develop a friendship with him.

Nicolai and Theo both shared the dream of creating what would later become their Battle Aniloid project.

For 10 years Dr. Nexus and Thorn would work closely together in C.O.S, so much so that Nicolai would take Theo under his wing and show him blueprints for a prototype.

The two would take said Battle Aniloid blueprints and present them to Devol City’s Special Forces.

The director of the Special Forces, Gideon Gauss enjoyed the idea and commissioned the duo for a prototype of his “Nexus System Numbers” battle androids.

With the large sum of money Dr. Nexus would leave C.O.S and open Nexus Systems and hired Thorn and those who worked closely with Nicolai.

Dr. Nexus and his crew would be giving the highly experimental Polymorphic Metal called Maxanium.

While it has been used in more modern applications, Gauss wanted to see if Nexus Systems could find a breakthrough with the new alloy that would allow itself to morph into weapons and armor.

With roughly 3 years of work, The prototype was created with this alloy in mind.

NSN-000 codename “Kevlar” was set on numerous military tests, and would later be sent out on real missions.

Kevlar was successful, however during one mission, his core was badly damaged.

The major flaw with Kavlar was the fact he was a bit too rough and his core was faulty.

Theo put in a Nova Type Core which would heat the Maxanium and allow Kevlar to “morph” the metal.

While a strong enough energy source to draw out the ploymorphing in Maxanium, it was incredible unstable.

Kevlar would often overheat and bring damage to his already unstable core.

Knowing it would take too long for Kevlar’s core to be fully repaired he was decommissioned to civilian life on Nicolai’s behalf.

Kevlar’s model would be mass-produced into the K-Combot series and be deployed as police and for military usage.

Kevlar’s dismissal angered Theo as he felt that Nicolai was too soft on their prototype, and could have been perfected if worked on further.

But Nicolai would disagree as he saw the pain Kevlar would be in whenever his core was in use.

This argument would result in Theo Thorn leaving Nexus Systems to go off planet and join another military organization.

While very dishearten by Theo leaving, Nicolai would push forward, using the blueprints the two created.

For the next 10 years, Dr. Nexus would master the secrets of the Maxanium, and would develop NSN-001 through NSN-005.

These Aniloids would be later known as the Polymorphic Rangers as an effort to combat the newly formed Cyber Syndicate.

NSN-006 through NSN-009 would be a police unit to further aid Devol City’s Police Department.

With the success of the K-Combots, the Polymorphic Rangers, and the DCPD unit Dr. Nexus was relieved of his active contract with the Special Forces at age 40.

He was now allowed to retire or create whatever he wanted now for Nexus Systems.

While he was satisfied with his work on Maxanium, Dr. Nexus’ perfectionism wouldn’t allow him to settle on “good enough” and he would go visit C.O.S looking for something of new interests.

Coincidentally, Nicolai was expected and was introduced to Her High Primus, Lady Jadius of the Dragoons.

Jadius told Dr. Nexus that she had heard of his advancements in Maxanium and was curious in working together with him and his team at Nexus Systems.

At first Nicolai was taken back a bit, but agreed in the partnership as he has been wanting to begin development on his final Battle Aniloid, NSN-010.

Jadius would tell Nicolai the secret and ancient knowledge of the Dragoons, Aeon, and the fact that Maxanium was known as a “Bio-Metal”.

With having raw Maxanium and pure unfiltered Aeon at his disposal, the sky was the limit.

While in development of NSN-010, Nicolai would heavily cybernetically augment his own body with the same technology he was using to create her.

While these augmentations would frighten his staff and close friends, Nicolai saw this as a net positive as he was able to work much longer and more efficiently.

Not to mention with obtaining Jadius’ “DNA Code” and gifted a weapon called The Vector Saber, these would be the final pieces to finish his masterpiece.

Roughly 10 years and 5 prototypes later Dr. Nexus finished NSN-010 which he called Silica Nexus, based off of the combined blood, sweat, and tears both Nicolai and Jadius put into her.

Jadius would have loved to stick around to see Silica activated, but sadly she was needed on the other side of the planet.

Jadius promised to return to Nexus Systems one day, as she had grown very close to Dr. Nexus.

While Silica was originally designed for combat, due to the Cyber Syndicate going quiet due to the Ploymorphic Rangers activity; her combat capabilities would be turned off as Nicolai wanted her to live a normal life.

However, with the return of the Cyber Syndicate and the near murder of Silica’s heroic mentor; Captain Cryonis, Silica was able to override her limiters and just barely could fend off Rezzver, the corrupted Nexus Numbers, and their leader, King Mad Thorn.

Silica begged for Nicolai to turn on her combat prowess.

At first, he was hesitant to do so after witnessing Silica’s raw power, but not wanting his creations to destroy the planet, Nicolai agreed.

He would monitor Silica’s activities as a Bounty Hunter, and slowly but surely unlock her limiters.

Eventually, Silica Nexus would be “completed” at 100% with her being allowed to use the Vector Saber.

Today Nicolai can still be found in Nexus Systems, aiding Silica in her battle anyway he can, as well as continuing to tinker and research in “mastery of the impossible” as Dr. Nexus puts it.

Nicolai Nexus has often been described as an eccentric fellow from his employees.

He tends to tackle his science a bit outside the box, which is mostly why he is seen as a bit of a “Mad Scientist”.

This also paired with his perfectionism of his works, and testing his creations for every possible thing that could go wrong and many wonder how Nexus Systems puts out anything in general.

Despite this, when he isn’t deep into his work, Dr. Nexus is a rather pleasant man to be around.

He has a rather fatherly side to him that is shown with his younger employees and especially his creations.

While NSN-001 through NSN-009 are normally too busy to visit, Nicolai is always happy to spend time with those he considers his children.

This applies doubly so for Silica Nexus, who lives in the Nexus Systems’ apartment complex when she isn’t on her Bounty Hunts.

He tries his best not to dote on Silica, but he can’t help but making sure she is always ready for whatever she may encounter.

One fun fact about Dr. Nexus is his augmentations, Nicolai is combat capable with his Maxanium frame, yet he seemingly has never needed to use said combat skills.