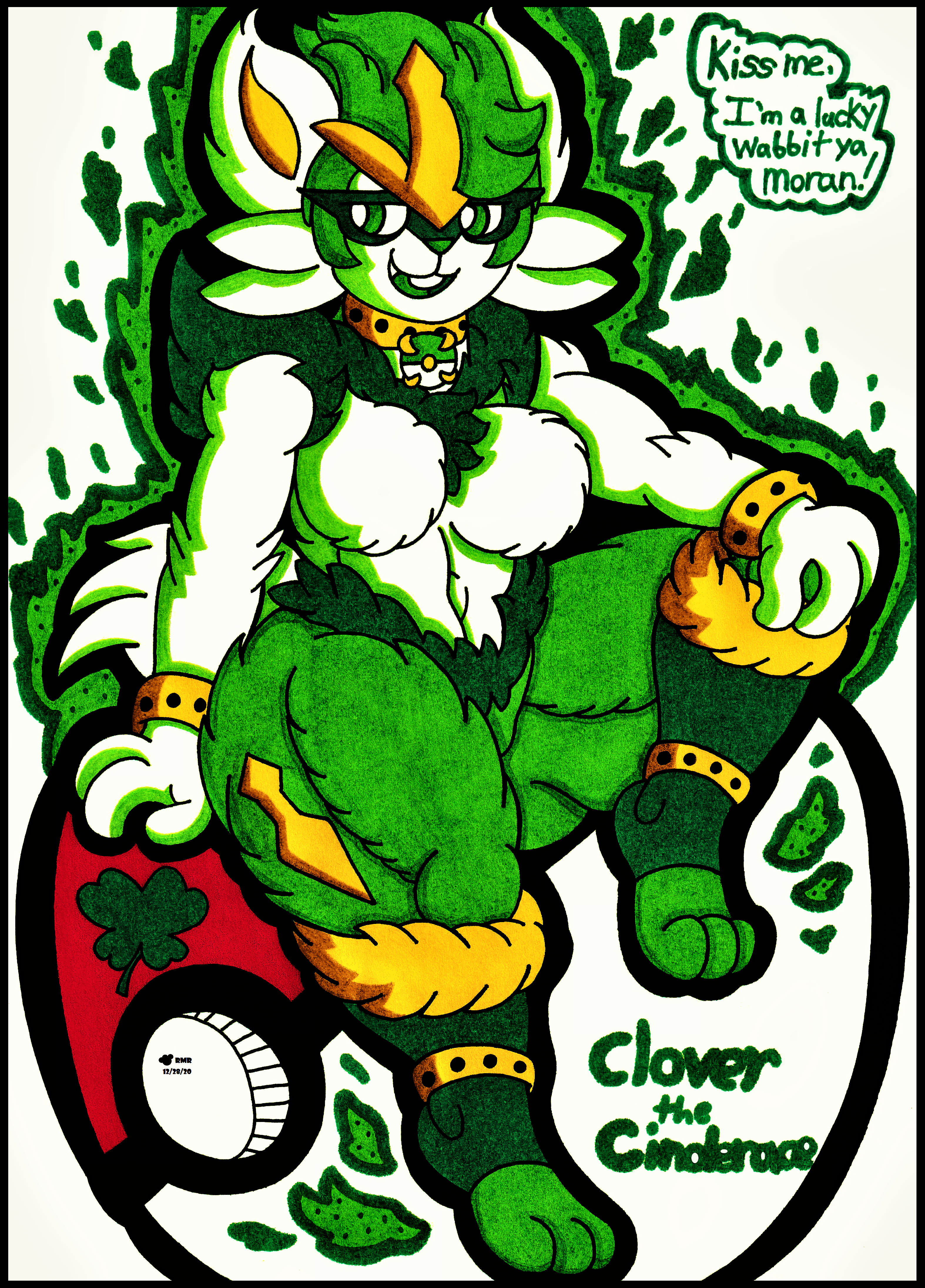 So... Am I late to the Cinderace hype train?

Ehh probably, but whatever.

I think it's safe to say that I don't care much for Pokémon anymore, at least when it comes to the main games after all the bullshit Gen 8 pulled.

But if there is one thing I still like, it's the designs of the trainers and the Pokémon, as for my fave design of Gen 8, it has to be Cinderace.

Was it because she is easy to lewd and is a rabbit?

But in a more serious note, I do love Cinderace's design as well when I found out she is shocking Competitively Viable with the Hidden Skill that acts a lot like Greninja's.

So, what started out as just one small fan art piece turned into me wanting my own Cinderace, I created Clover.

I made Clover green mainly because using blue would be too easy (and I've already seen a Blue Cinderace OC) and I don't like the Shiny Color.

However, I also liked to play into the whole "Lucky Rabbit" with a 4 Leaf Clover.

I know the clover/shamrock is more of an Irish thing, but Galar is basically the whole of the UK mashed into one place, so I can kinda get away with this.

I really liked the way Clover turned out, I added some smaller details to her in order to make her stand out more.

For her body, I made Clover a little chunkier and shorter, mainly because as much as I love Cinderace, the elongated legs sometimes look a little silly even if it makes perfect sense.

And because I had to, I imagine Clover would speak with a very thick Scottish accent, just to match Moira- I mean "Gloria".

If Clover proves to be popular, perhaps I'll have her comeback from time to time.

Being odd colored since birth as a Scorbunny, Clover as always been an odd case for a Pokémon.

For some unknown reason, Clover was born unnaturally lucky.

When Clover was in the care of Professor Magnolia multiple tests would show she was able to guess correctly cards chosen at random, and yet no signs of Psychic abilities have been detected.

Clover was healthy nonetheless, and stayed with Magnolia until a loud mouth lass named Moira came looking for a Starter Pokémon to start off her journey in Galar.

Throughout their trip through Galar, Moira's attitude rubbed off on Clover as the both of them loved getting into fights with other trainers and Team Yell mooks.

In battle Clover grew quite skilled and with her luck, she started getting a little too overconfident in herself.

Normally Moira would tell Clover not to act too brash all the time, but seeing how Clover could back up her skills and manage to get out of battle with little scrapes; even Moira was starting to question this strange luck.

Clover would eventually evolve into a Raboot and finally a Cinderace, and the luck grew more and more.

This started to give an idea for Moira, they both figured that they could get some extra money with Clover's luck, and their training sessions quickly turned to bouts of brainstorming.

Time and time again Moira and Clover would put on a "show" and test Clover's insane luck, with the two quickly becoming viral stars over the net and ranking in loads of money.

Eventually Moira and Clover got sponsor offers left and right, allowing them to compete further in the Galar League and eventually given a Dynamax Band.

Moira and Clover would single-handedly walk through the rest of the Galar League, discover the Macro Cosmos plans with Chairman Rose, and finally face off against Eternatus.

With this feat as the Regional Champions, Moira and Clover quickly became the talk of the region; and Clover becoming dubbed as "The Luckiest Rabbit in the World" with Clover going through the Galar League undefeated.

The last time Clover and Moira were seen they were exiting The Isle of Armor and heading into The Crown Tundra.

Due to Clover's insane luck and Moira's more brash personality, it wasn't surprising that she acts just like her trainer.

Most of Clover's inflated ego and overconfidence should be her downfall, but do to the fan base she and Moira have gained, the cheers and chants just hype her up even more.

However, that isn't to say that Clover can't back up her claims, thanks to her ability of Libero, all of her attacks does extra damage; as well as temporarily switching types up to confuse her opponents.

Clover is even known to like handicap matches where she fights two Pokémon at once, she rarely fights herself and just tricks her foes into hitting each other with her nimble feet.

Also, thanks to Clover's powerful legs, any hits from them are going to cause some serious damage, despite her being slightly shorter than the average Cinderace.

Clover's fire also burns slightly hotter than normal, while not as hot as blue flames, the green fire tends to burn her opponents a little easier.

She also enjoys performing her incredible dares and seeing the sheer faces of disbelief as she is shows off her luck first hand.

One day, once she and Moira are finished with the Galar Region, Clover dreams of traveling the world and finding more rivals to fights, as well as showing off the reason why she is the Luckiest Rabbit in the World.