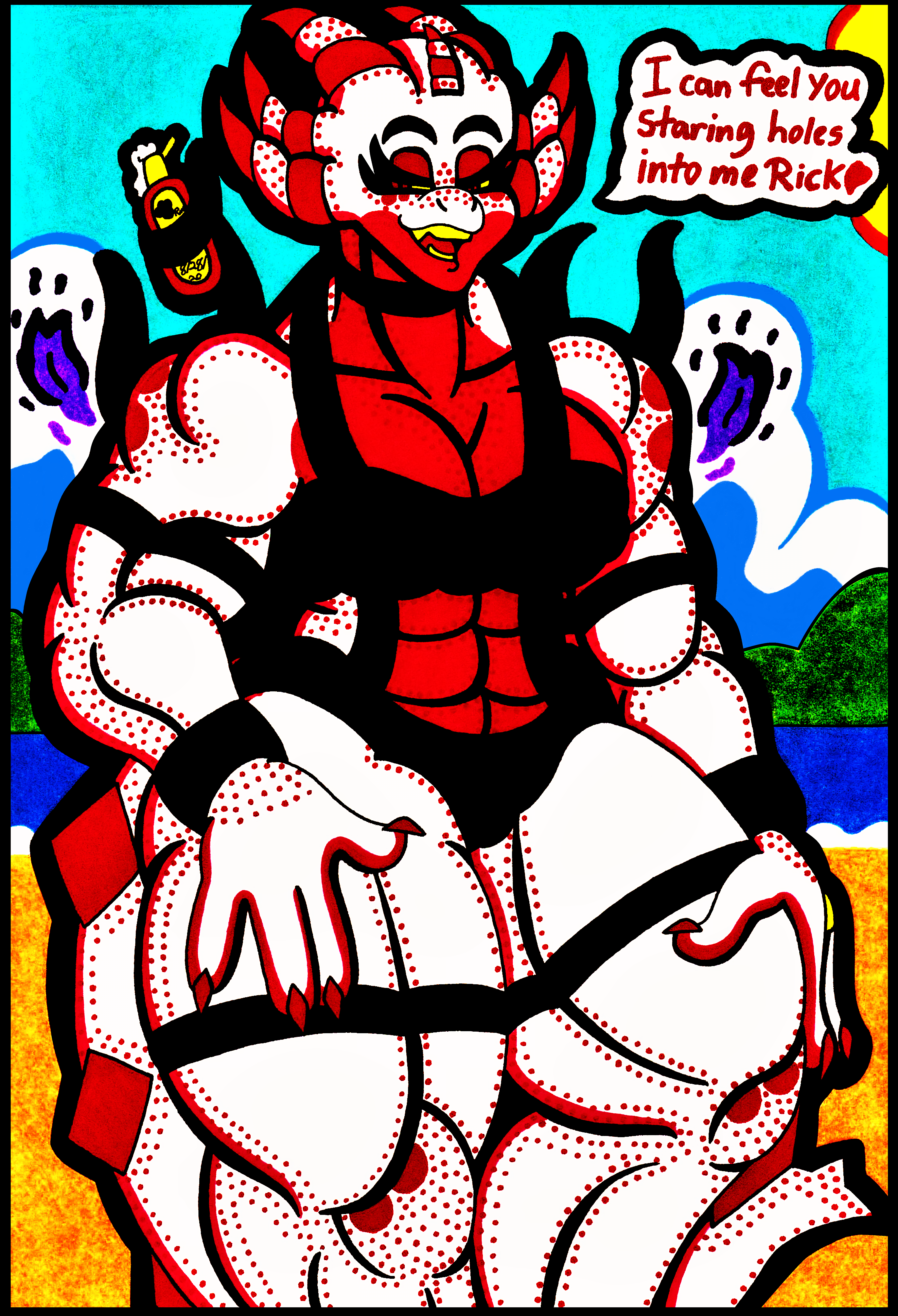 Time for some self-indulgence, here is Jia at the beach!

Since Summer is going to be ending in 3 weeks, I wanted to draw something for the occasion.

I was missing Jia after working on the Psyker project for a month straight.

And it felt nice to work on Jia after a little while.

Jia turned out to be a bit more muscular this time around, I didn't intend on making her this more muscular, but I think her body turned a little better than I expected.

We can just chalk it up to Jia training more often.

I also wanted to give this piece a background as I'll admit, I'm lazy and tend not to add them if I don't have to.

However, this one turned out fantastic!

I think when I boosted the color the shading on the cloud faded out a little, but I do like the shimmer effect they give off.

But overall, I'm very happy with this piece and it's my favorite piece of Jia so far.

As the final days of Summer are upon us, I thought to myself that it would be a great idea for Rick and I to spend some time at the beach.

We decided to head on down to Coral Cove as I’ve heard from Zag that their beaches are quite lovely, especially during late Summer.

I think this is what Rick and I needed, as ever since I gained the Blight Dress and learned to control my new powers, events just seemed to fly by so fast.

That being said I know Rick seeing my comatose body for roughly a week during my “operation” was something that haunted his mental state for the past 2 months.

This would be a nice escape to take the worry off of Rick’s mind, no training, no Fire Lotus missions, just me and him.

And wouldn’t you know it, after the first half hour of walking around the town, Rick was feeling so much better.

I can tell that this was one of the few times Rick got to explore a more tropical setting that didn’t involve the Black Lotus.

He was taken a bit off guard do to all the civilians seeing the both of us in this small little coastal city, but lucky for us they didn’t bother us, just a little starstruck is all.

As we headed to the beach one of the locals told us about Coral Cove’s water.

The waters are such a deep blue and reflective to the sunlight, that on partly cloudy days, you can see the clouds “shimmer” with faint blue lights.

This caught my interests as it was something that Zig hadn’t told me about, so me and Rick set up our beach gear.

With the Blightling infused with me, I technically never have to buy clothes again as it can transform into whatever I can imagine.

So with that in mind, I transformed my clothes into this sexy little swimsuit I was eyeing a few days before our trip.

This instantly caught Rick’s eyes, I could tell he wasn’t trying to stare too hard as he was reading his comics; but I could feel his gaze on me.

I teased him by saying “I can feel you staring holes into me Rick” he was a little embarrassed as I giggled at him with the sun screen bottle in one of my small Blight tendrils.

I’ll admit, his gaze was turning me on just a bit, I could feel myself embering up.

Walking my way back to Rick I let him rub me down with the lotion.

I gave off tiny moans as I loved the way Rick’s hands felt on my body and scales.

Rick doesn’t like to admit it in public, but he loves it when I tease him like this.

Normally I wouldn’t act like this in public, but the spot me and Rick found was rather secluded with a wonderful view, so it’s not like anyone would see us.

That was such a lovely day, watching the clouds of Coral Cove shimmer like a dazzling light show.

If only I knew about Coral Cove sooner.

From now on, this’ll have to be our little private getaway when Rick and I need a breather.