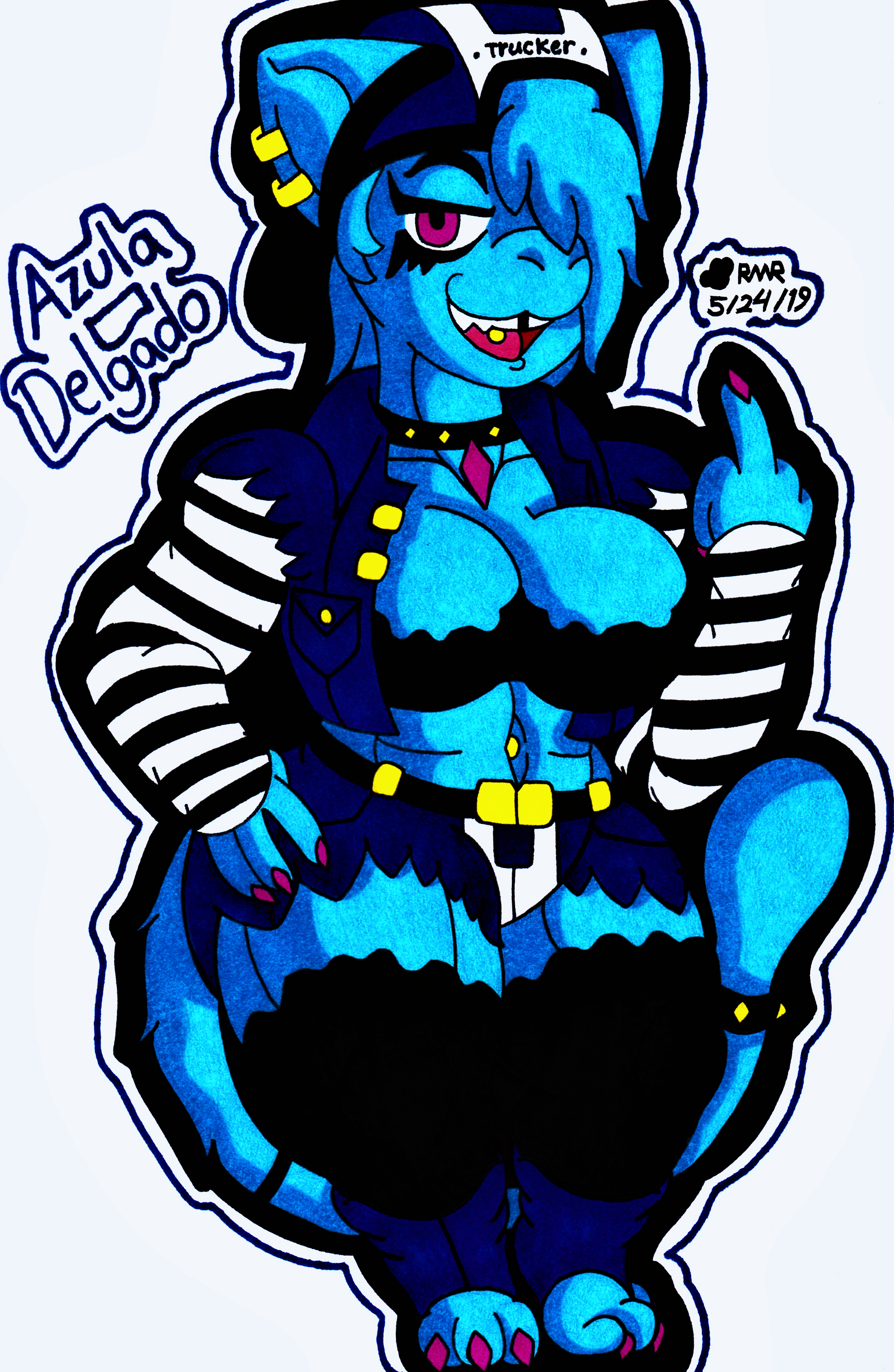 Well, it's been a little while since I made a Pokemon character for myself.

Normally I've been trying to keep the new OC creation to a minimum, but something in my brain was saying "Make a Shortstack Mew".

I had mainly two reasons for creating Azula.

1: There aren't many shortstack Mew out there, and 2; for the few Mew OCs I found, they are either feral, or Loli Bait...

So I had to take it upon myself to make this girly for myself.

I quite like the way Azula turned out, I used Android 18's outfit as a base for her clothing and I added a Trucker Hat just because I rarely draw characters wearing hats in general.

Not to mention any excuse to draw a new shortstack is enough of a reason for me; especially a punky one too.

She was found by the Delgado family of Meowstic on their doorsteps.

The couple had no clue where this Mew child had come from, the only things left was a hastily written note begging any kind soul to raise this child to live a happy life, and a small necklace that had the name “Azula” graved into it.

At first the two were afraid for Azula’s safety, as Team Rocket had been causing problems in Kanto and Johto.

However, Team Rocket activity had been nonexistent in the Orange Islands, so they figured they were safe.

As the years when on, Azula Delgado lived a very normal life, the fact of her being a Mew did make her a bit of a local celebrity, but her “fanbase” never was anything problematic, nor with it interfere with her life.

While in school Azula discovered her two loves; fighting and music, and this was mainly because of one person, Alice Mishima.

Azula caught the Mishima 5 live during their Farewell Tropical Tour and was able to meet Alice backstage.

Azula told Alice how much she loved her music and how she inspired her to take up fighting and learning how to play the keyboard.

Touched by this Alice gave Azula one of her first keyboards she learned how to play and and signed it for Azula.

As well as giving Azula a pair of training gloves.

With the acknowledgment of her idol Azula would continue to train throughout her schooling and later compete in the Orange Island League after graduation.

After completing the Orange Islands, Azula moved to Unova in order to compete in the Unova League and to start a band.

While she was able to compete in the Unova League and become Champion, she wasn’t able to really start her band.

But as luck would have it, Azula met Alice Mishima again.

She had been watching Azula claw her way to the top and was majorly impressed.

Alice offered to let Azula move in with her to a much bigger place and would personally train Azula further.

She even helped Alice with her 3rd studio album and plays the keyboard during Alice’s live tours.

Azula grew up as the seemingly “good girl” in school, but in reality she was quite the prankster.

Thanks to her being able to Transform into any other Pokemon, Azula was able to get into places where she wasn’t exactly meant to be.

Now she did nothing illegal, but that didn’t stop her from “pushing the line” more than few occasions; she was never caught, but grew out of it eventually.

After meeting Alice Mishima, Azula rather turned up the “punky” attitude which helped her out in the Orange Island League, and especially the much tougher Unova League.

Once moving in with Alice and with months of training Azula adopted more of Alice’s attitude, but despite the tough exterior, Azula is a very sweet girl and greatly enjoys the downtime she gets with Alice.

Rumor has it that Azula and Alice have been dating for quite a while now; whenever it is brought up Azula can’t help but get flustered.