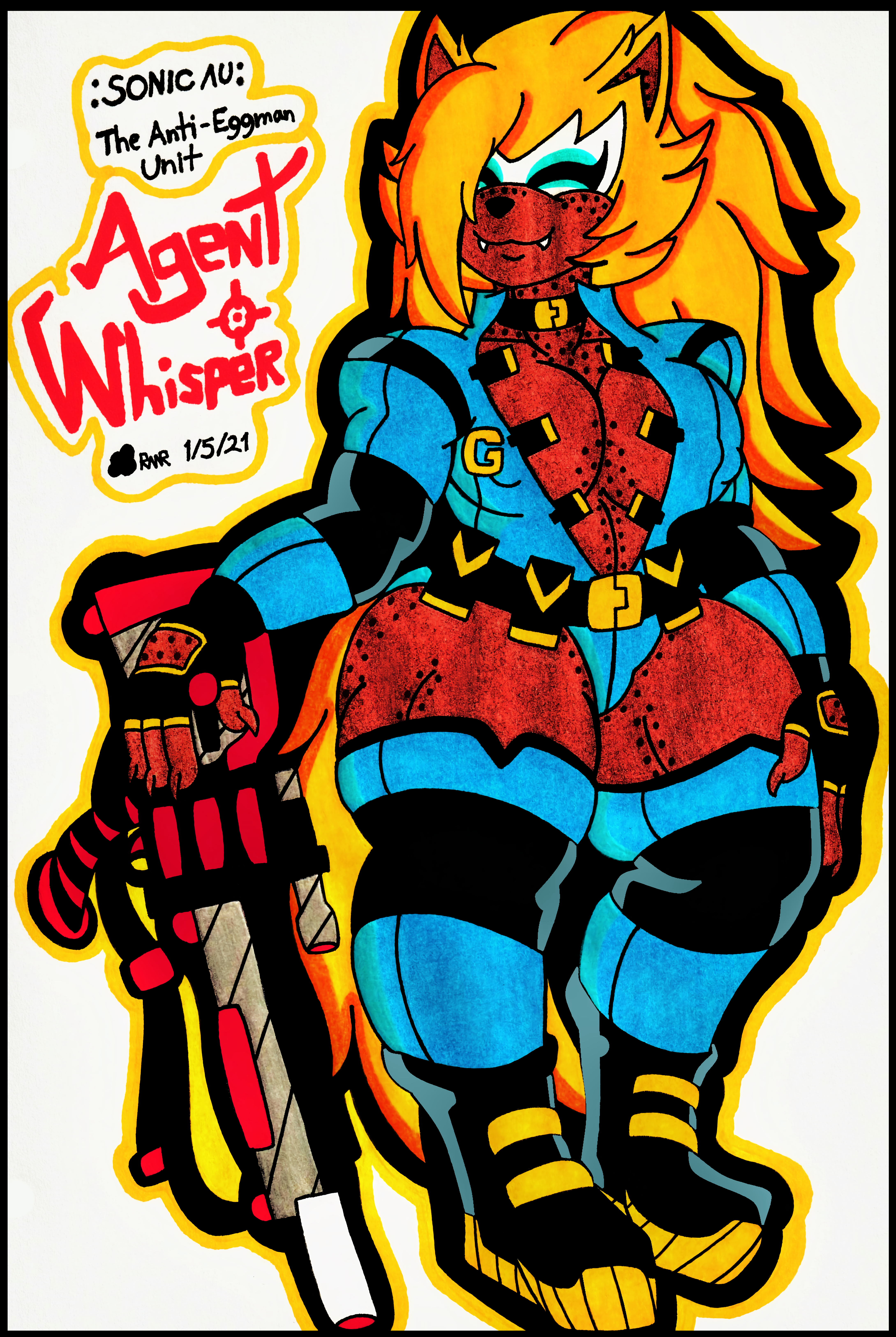 But, that’s not going to stop me from posting something for the new year.

I don’t know why, but I’m in a Sonic mood once again, and I find myself returning to Whisper.

Back in September I made a picture I’m still rather proud of with Tangle and Whisper.

In the description of the picture I wrote up something for the two of them that just kinda turned into a Sonic AU where they both ended up joining G.U.N.

It was mostly for shits and giggles to amuse myself, but, I thought about revisiting that idea for real this time, so I started with Whisper.

Since Whisper is a sniper, I wanted to lean into one of her inspirations more; that being Sniper Wolf from the Metal Gear Solid series.

I tried my best to emulate Wolf’s outfit with a slight few modifications.

I also let Whisper’s hair down and flow in the wind a little as I like to think this version of Whisper is more confident in herself.

That and with her plunging V-Neck jumpsuit, she isn’t too shy anymore either.

I had a lot of fun with this one, no real issues with the anatomy or pose as I got it to work the way I wanted.

For those gun nuts, I’m sorry, but I can’t draw guns, so this is the closest I could get to a more “fantasy” sniper rifle.

This turned out so much better than I expected, and I think perhaps I’ll tackle Tangle next.

Once apart from the legendary Diamond Cutters Mercenary Unit, Whisper the Wolf acted as the designated scout and sniper of the 5-man team.

Whisper’s aim was unrivaled as she could make kills on Eggman’s badniks from many miles away with ease.

Things were going well for the Diamond Cutters, as they traveled from city to city hunting down bounties, destroying Eggman bases, and generally being seen as modern day heroes amongst Human and Mobian kind.

That is, until one day when there was a massive attack on the Holoska outskirts of Moses Island led by Eggman.

The Diamond Cutters would infiltrate the base like normal, but what they didn’t know was they were heading into a trap.

Mimic the Octopus; the groups Stealth Infiltrator grew sick of the meager pay the Diamond Cutters were getting for the past few missions; and with Eggman’s Badniks growing stronger and smarter over the years Mimic saw he was on the “losing side”.

Behind his teammates back, he made a deal with Eggman, to lead the Diamond Cutters into Moses Island, while Eggman would get the jump on them; so long as Mimic himself was the only one to survive.

They agreed, and in the ensuing chaos, Smithy, Slinger, and Claire would all be locked into a room full of Shadow Androids, as they’d be gunned down one by one.

Whisper arrived too late to save them, as she too just barely escaped with her life.

Through her mask, Whisper heard and saw everything Mimic did with Eggman, as well as her teammate’s final moments.

From that day forth, she swore revenge on Mimic and Eggman for what they did to her and the Diamond Cutters.

As years past, Whisper would continue where she left off, earning the nickname of “The Guardian Angel” as she wandered the globe as she continued to hunt down Mimic and Eggman.

One day, she’d met a lemur by the name of Tangle, whom she merely passed off as some hyper energetic girl that clearly was influenced by Sonic the Hedgehog’s heroics.

Whisper would ignore Tangle for the longest time, but the lemur would follow anyway, just begging to help out.

Eventually Whisper would let Tangle come along, and she was impressed, Tangle wasn’t just all talk as her acrobatics and hand-to-hand combat was better than expected.

The two would become partners and work together for the next few years.

As much as Whisper would hate to admit it, it was nice to have some company.

Their trust in each other would be put to the test as both of them would run into a crazed and psychotic Mimic.

Whisper refused to let Tangle get involved and fought Mimic alone for a long while.

It wasn’t until Mimic started using some venom on his knife and stabbing Whisper did things start going in his favor.

Things were looking grim for Whisper when finally Tangle let off some explosives in Mimic’s Hideout.

While Mimic was distracted, Whisper took her knife and sliced at Mimic’s throat, while Tangle would grab Mimic's knife and stab him in the head.

With the blood loss from his throat and poison in his skull, Mimic was finally dead.

Whisper and Tangle managed to escape, and the two would embrace with a kiss in the safety of their armored van, finally happy to know that it was all over.

A few weeks later, Whisper would be approached by G.U.N. Agent Rouge the Bat.

Rouge was impressed to hear that two lone mercenaries were able to take down such a serious threat like Mimic.

She came to offer Whisper a job at G.U.N. to be a part of the newly appointed Anti-Eggman Unit.

Whisper refused, but would only join on the condition that her partner Tangle would join alongside her.

Rouge agreed, and the three left for G.U.N. HQ.

For the next 2 years, both Whisper and Tangle would be trained by the like of Rouge and Shadow the Hedgehog, in order to see if they would be able to handle anything.

With enough practice in, Whisper and Tangle fit right in with G.U.N. as Whisper’s kill count would start and be unmatched even to this day; 403 badniks and counting.

Thanks to Whisper’s trauma, her personality has been shakened up.

Originally, she was quite cheerful and bubbly with the Diamond Cutters, being always seen as the “Little Sister” of the group.

But after Mimic’s betrayal, and the death of the Diamond Cutters, Whisper became much more reserved and somber with her attitude.

She often didn’t speak to others, and when taking jobs she spoke in just whispers with short yet direct sentences.

This would continue for a while until Whisper met Tangle, as the lemur girl’s jokes and overall adventurous personality would help Whisper to come out of her shell.

After Mimics death by their hands, Whisper and Tangle would share a close and tender night with each other.

Whisper for the longest time didn’t know if these feelings were real, or if it was just a sudden urge.

Nowadays, Whisper is a more well-balanced mix of who she was, vs who is she now.

While still speaking with a softer voice, Whisper is much more confident in herself, with her rather revealing outfit showing off just how comfortable she has become with herself.

Whisper’s weapon of choice is the Multi-Driver Rifle MK4 (MDR-MK4).

This powerful weapon was developed by G.U.N. that harnesses the power of multiple Chaos Drives and reverts Chaos Energy into powerful blasts with differing attributes.

The Red Drive fires an ultra concentrated laser that can ricochet off of solid objects many times and even through midair itself.

The laser is so powerful that it can pierce even the hardest metals with ease.

When not in use of its other drives, this is the rifle’s natural state and Whisper’s favorite mode to use.

The Blue Drive compacts the muzzle and stock to make the rifle act more like a shotgun.

These blasts are devastating up close but still travel decently far when further away.

The Green Drive widens the barrel of the rifle and shortens the stock into that of a Grenade Launcher.

These powerful green shots can switch between a frag bomb, cluster bomb, and sticky bomb variety.

The Cyan Drive doesn’t change the appearance of the rifle itself, but does allow it to act more like an assault rifle with burst fire and automatic fire options.