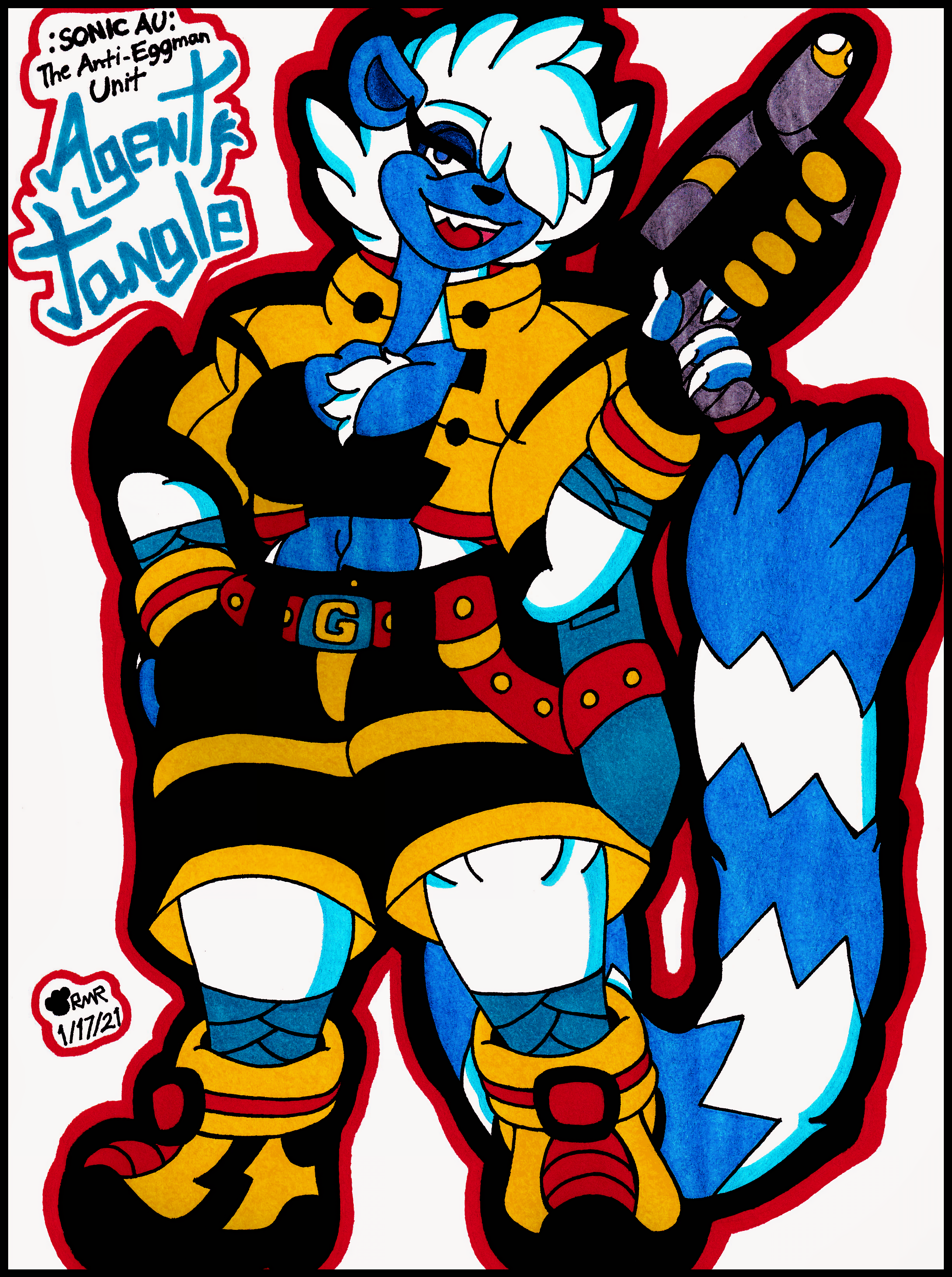 It took a little while, but here is Agent Tangle in my little Sonic AU thingy.

Again, this little AU is more for myself, and I’m probably never going to flush it out fully; I just wanted an excuse to draw both Tangle and Whisper again.

So Tangle’s design, this one I had to think about a little.

I knew Tangle wasn’t going to look great in combat fatigues like Whisper would, so I had to get a little creative.

The idea of Tangle wearing something still sporty was in my mind, so I worked with that.

I think I was able to make her look pretty great.

Unintentionally Tangle looks like she wandered out of Kingdom Hearts, could be her shoes and shorts, but, it fits her, so I don’t see that as a negative.

As for Tangle’s weapon, she just seems like the type who wouldn’t use heavier weapons, so I think this pistol would work well for her.

Just enough for some protection, but not bulky enough to hinder her acrobatics.

Growing up in Spiral Hill Village most of her life Tangle lived a rather easy-going life.

For most people, this would be fine, but for Tangle’s outgoing personality, this was boring for her.

She would often find herself exploring outside the village, looking for adventure.

One day, she stumbled upon an Eggman Badnik base being built underneath Spiral Hill without anyone’s knowledge.

Springing into action Tangle with her speed, acrobatics, and extremely powerful tail made quick work of the badniks and dismantled the base.

Realizing that she got a major thrill out of this, as well as being thanked by everyone in her village, Tangle would set off for adventure to find and destroy more of Eggman’s sneaky hidden bases.

From time to time, Tangle would bump into Sonic the Hedgehog, as the two would team up on occasion.

While Sonic never stuck around for too long, Tangle was able to learn a few things from the Blue Blur, and with his encouraging words, Tangle would continue forward.

Eventually, Tangle would find herself face to face with a wolf by the name of Whisper.

Tangle had heard rumors of some “Guardian Angel” that was doing mostly the same things she was; and Tangle wanted to learn more about her.

For a long while, Tangle would follow Whisper around, learning more about her from just observing Whisper’s movements.

The more Tangle saw, the more she needed Whisper to train her.

At first, Whisper said no, but for a long as Tangle had been tailing her, Whisper couldn’t help but admit to herself that having company felt nice.

Whisper agreed to have Tangle tag along as well as train Tangle with everything she knew.

For the next few years, the two would grow closer as Whisper trained Tangle.

As the trust grew, Tangle would ask about Whisper’s mask that she wore.

Whisper was reluctant, but she allowed Tangle to view the contents within.

Tangle saw Whisper’s traumatic past, and couldn’t help but feel bad for nagging Whisper for as long as she had.

Both were taken aback, but realized that maybe their friendship could turn into something more.

The two would later find the hideout of Mimic the Octopus, now gone crazed after being hunted down by multiple parties.

Whisper saw the danger and charged in first, wanting to end this quickly.

Tangle chased after but fell into a small trap room.

While not hurt, the small space was causing Tangle to panic.

She was able to calm herself and climb out, rushing further towards the ongoing knife fight.

Whisper was losing the fight, and Tangle needed to make a distraction.

So, Tangle started setting up some explosives quickly, to cause damage to the lesser reinforced parts of Mimic’s hideout.

This worked, as Mimic was distracted long enough in order for Whisper to slash Mimic’s throat, as Tangle would rush from behind to grab Mimic’s knife and stab him in the head, killing him.

Tangle would carry Whisper out of the crumbling base, just being happy it was finally over.

With almost instinct, Tangle would kiss Whisper later that night in her van, saying “I told you I wasn’t going to leave you.”

Whisper would only agree if Tangle came along with her.

Rouge said yes and the three would head to G.U.N. HQ.

Tangle would continue to get training from Whisper herself, as well from Rouge and Shadow the Hedgehog.

It was a long hard 2 years, but with Whisper by her side, Tangle felt she could take on the world.

Loud and Excitable, Tangle is always one to take on life head first, no matter what it would throw at her.

It is this personality that made her pretty well known in Tangle’s earlier years.

Also, with Tangle’s friendly demeanor and helpfulness towards anyone that would need it, she would be very popular among smaller children.

This bubbly personality was also the same thing that helped to bring Whisper more out of her shell.

This was something Tangle was most happy about, as after seeing Whisper’s mask recordings, she would do anything to see Whisper happy again.

These actions would explain why the feeling she had for Whisper quickly developed from student and mentor, to lovers very quickly.

The two are practically inseparable nowadays, and are rarely seen going on solo missions.

While in a relationship with Whisper, Tangle also has great rapport with the other Anti-Eggman Unit members; mostly getting some “love advice” from Rouge and just asking Shadow perhaps too many questions about his Chaos Powers.

While Tangle wasn’t ever too fond of the idea of using firearms at first; when traveling with Whisper and what they do for a living, she’d have to get use to it.

Tangle was given a Combat Pistol from Whisper herself.

Much like G.U.N. weaponry, it was powered by a Yellow Chaos Drive.

The pistol is able to switch between manual fire, and a 3 burst auto fire function.

Its trigger can be held down in manual mode to charge the shot, and make the following charge shot many times more powerful.

Tangle would get help from Shadow the Hedgehog to later upgrade Tangle’s pistol to have some mild ricochet properties.

While this was added just for Tangle’s amusement, the practice Tangle got in with her “trick shots” have gotten her out of some more dangerous situations.