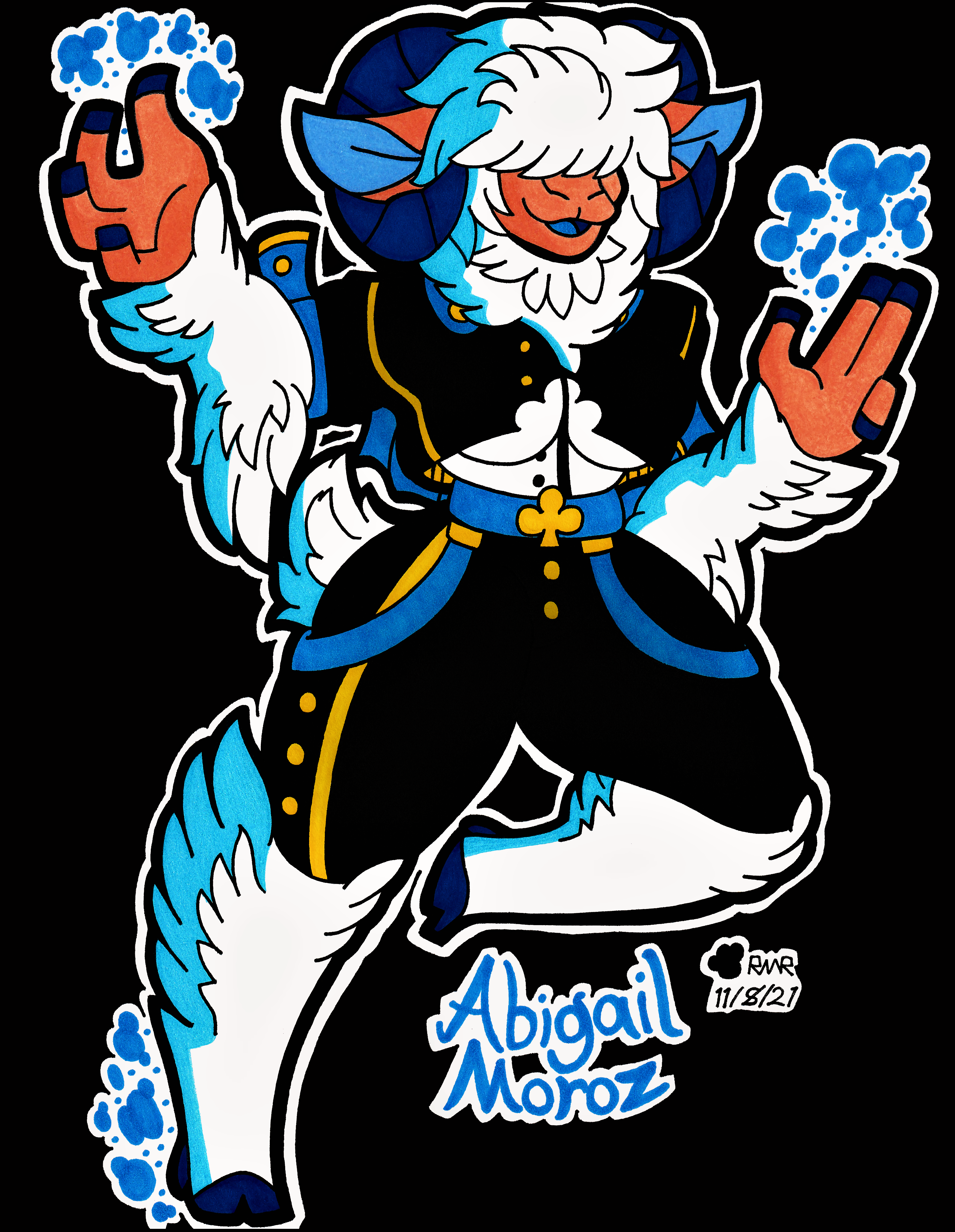 Well, after like for a week, I was able to this finished.

Here is the next person in my little Hellion project, this is Abigail Moroz, and she is the 2nd of three Generals in Valentine Castle.

I had a few Sheep ladies before, but with me being a little better than the last time I drew one, I wanted to give it another shot.

The idea of her being a psychic I think would be fun, it's a power set I dabbled with a little in the past, but at the same time, it fun to work with.

I had a lot of fun with Abigail's overall design.

Her wool flowing out of her shirt and the legs really looks great against her black jacket and pants.

Not to mention, the hair covering her eyes and the blue on her.

Title: The Ace of Clubs.

Born into a family of Monster Hunters, Abigail Moroz from a young age was trained to hunt the most dangerous prey in the Netherworld; Vampires.

Since Abigail was young, her hometown of Mullderburry was ruled by a wicked and cruel Vampire covenant under the House of Craven.

The headmaster, Richter Craven, would randomly pick townsfolk to be his slaves inside the covenant itself, and would freely feed on who ever he wanted.

The Moroz family were secretly forming a group of freedom fighters called The Blue Rogues, made up of mostly powerful Hellions that used psychokinetic powers called Psykers.

They would make plans to storm into the House of Craven, but Abigail had a plan to use herself as bait in order to get inside.

Her father wouldn’t allow this to happen, yet some other Blue Rogues figured that the Vampires could fall for the trick.

Richter was a very arrogant Vampire, and not too smart, and luckily for Abigail, this gambit paid off.

Abigail was taken into the Manor, and she took detail of every little crack and imperfection.

Near the backside of the manor, the wood around the windows were water damaged due to the dampness of the room.

Letting the Blue Rogues know telekinetically, they would sneak in overnight and slaughter the Vampires with relative ease.

Richter Craven would be tortured, and he’d spill some information about some other Vampire covenants around the continent.

Hailed as heroes, the Blue Rogues’ numbers would triple, as the group would make Mullderburry their headquarters.

They would slowly but surely work their way outwards, to slay not only Vampires, but other powerful and problematic Hellions like Lycans, Witches, and many more.

As Abigail would grow older in the following hundreds of years, she’d eventually helm her own sect of the Blue Rogues that would primarily hunt down Vampires and Vampires only.

She was always to improve and perfect her psychic abilities via her hunts, making her power even rival that of more powerful Psyker Vampires.

With Abigail’s success and power, she would grow a little cocky, often baiting herself to lure out Vampires for her group to gang up on them without knowing.

And while these victories were smiled upon, eventually the local Vampires and their covenants would grow sick of these hunters killing their kind.

So they’d wait and scheme for their perfect time to attack.

The Vampires knew the Blue Rogues’ forces were spread apart due to all the work they were getting; leaving Mullderburry mostly defenseless.

A head Vampire, named Serena Nightingale, would lure Abigail’s group further away from the main group.

She would stall them long enough to let her teleporter generator warm up, and send her force of troops directly to Mullderburry.

Abigail would charge straight towards Serena, blasting her through abandoned houses and stabbing her full of planks of wood.

All Serena did was laugh, as Abigail’s attack did hurt, but barely did any damage.

It would be Mr. Moroz, Abigail’s father, to take over fighting Serena, forcing Abigail back to take care of the other Vampires.

With the two Sheep in the middle of a shouting match, Serena took her moment, and with one quick swipe, decapitated Mr. Moroz’s head clean from his shoulders.

Before Abigail could even process what happened, Serena would claw at Abigail’s stomach and push her off of a cliff.

Serena’s army would be teleported to Mullderburry, razing the city to the ground in a matter of hours.

The Blue Rogues would be disbanded for those few who survived, as they would do their best to go into hiding.

As for Abigail, she had to live with the guilt that she lost her father, group of friends, and hometown, all in one day thanks to her arrogance.

From time to time over more hundreds of years, Abigail on her own would go hunting after Serena for the sake of revenge.

She would kill more Vampires and still be able to never be tracked down.

Abigail would find her way into Valentine City, she had heard of a Vampire up on the base of Everfrost Peak.

As much has she wanted to kill the Vampire up on the peak, Abigail heard far too many rumors on how powerful this Ms. Valentine was.

She’d be easily out matched in a solo fight, and with Valentine City having its own grand army, it would be suicidal to even attempt making a scene.

All she wanted, was information about Serena Nightingale, and she’d be off.

Abigail would manage to gain an audience with Ms. Valentine, and she would ask Vivian all she knew about Serena Nightingale.

Vivian told Abigail that she was in an “alliance” with Serena, only using her to slowly trickle the Nightingale funds into Valentine City itself.

Vivian told Abigail that if she agreed to team up with her, the 2 would personally go take care of Serena and her servants themselves.

In unease about this, Abigail agreed, as the two would storm into Nightingale Castle and lay waste to everyone in their path.

Abigail got to see Vivian’s power first hand and couldn’t help but be frightened at how easily she’d rip through Serena’s forces like they were nothing.

While Vivian took care of the fodder, Abigail was able to track down Serena and psychically ripped her apart, limb from limb.

With her revenge accomplished, Abigail was about to make her leave, that is until Vivian spoke up.

“You are a most powerful Psyker, perhaps you should join me Ms. Moroz, you don’t seem to have anywhere else to go.”

Abigail knew this was true, and figured that despite being a Vampire, Vivian was far more pleasant to be around than others.

Abigail agreed to join Vivian, and shortly became the Ace of Clubs in Vivian’s army.

Now at the age of 1550, Abigail’s Psyker powers have only grown since joining Vivian.

She feels a new form of welcomed companionship not felt since the end of the Blue Rogues.

And while protecting Vivian, and Valentine City itself, Abigail feels this is in repentance of her past failures.

When she was younger, Abigail let her cockiness often get the best of her.

Being impulsive got her into trouble that she usually could get out of, but since her father’s death, Abigail had learned to be more careful.

Focusing more on her future sight/vision, it would allow Abigail to weigh her options and see what is the best way forward.

As the youngest of the Generals, Abigail is normally calm and in some state of meditation for the sake of practice and staying mellow.

She’ll tend to float around Valentine Castle, mostly for her own amusement and more psychic training.

Her outfit is styled very closely after her previous group, the Blue Rogues.

She has tried to wear other outfits with different materials, but Abigail swears her performance is heightened while wearing it.

On her downtime, Abigail can be found unwinding in the West Wing Library of the castle, mostly various entertaining books like comics, joke books, and fun facts.

Puns tend to be her favorite, and while they are mostly groan worthy, she does get some chuckles every once in a while.

As a Psyker, Abigail uses her mind for all of her attacks.

She has access to 4 main abilities; telekinesis, telepathy, teleportation, and foresight.

Abigail’s telekinesis is her main offensive ability, as she can use it to push or pull away with incredible force.

She can also use other objects around her to pick up to the same effect.

One of Abigail’s most effective way of getting rid of her foes, (especially Vampires) she’d hurl sharp objects at vital areas on the body.

Inside Abigail’s jacket, she likes to carry some small, thin knives for emergency cases.

If she focuses and visualizes one spot in her mind, she can teleport to that area.

Distance plays a role, as if the location is extremely far away, she might struggle to get to the exact area.

She can also use her teleportation to warp allies closer to her, or send opponents far away in unknown regions.

When she is using far less of her Psyker powers, Abigail uses her powerful hoofed legs to land crushing bows.

It is rumored that thanks to Abigail’s taller and slender frames, her legs has more reach.

That and channeling Psyker energy though her legs, she can land devastating power strong enough to kill in a single blow.