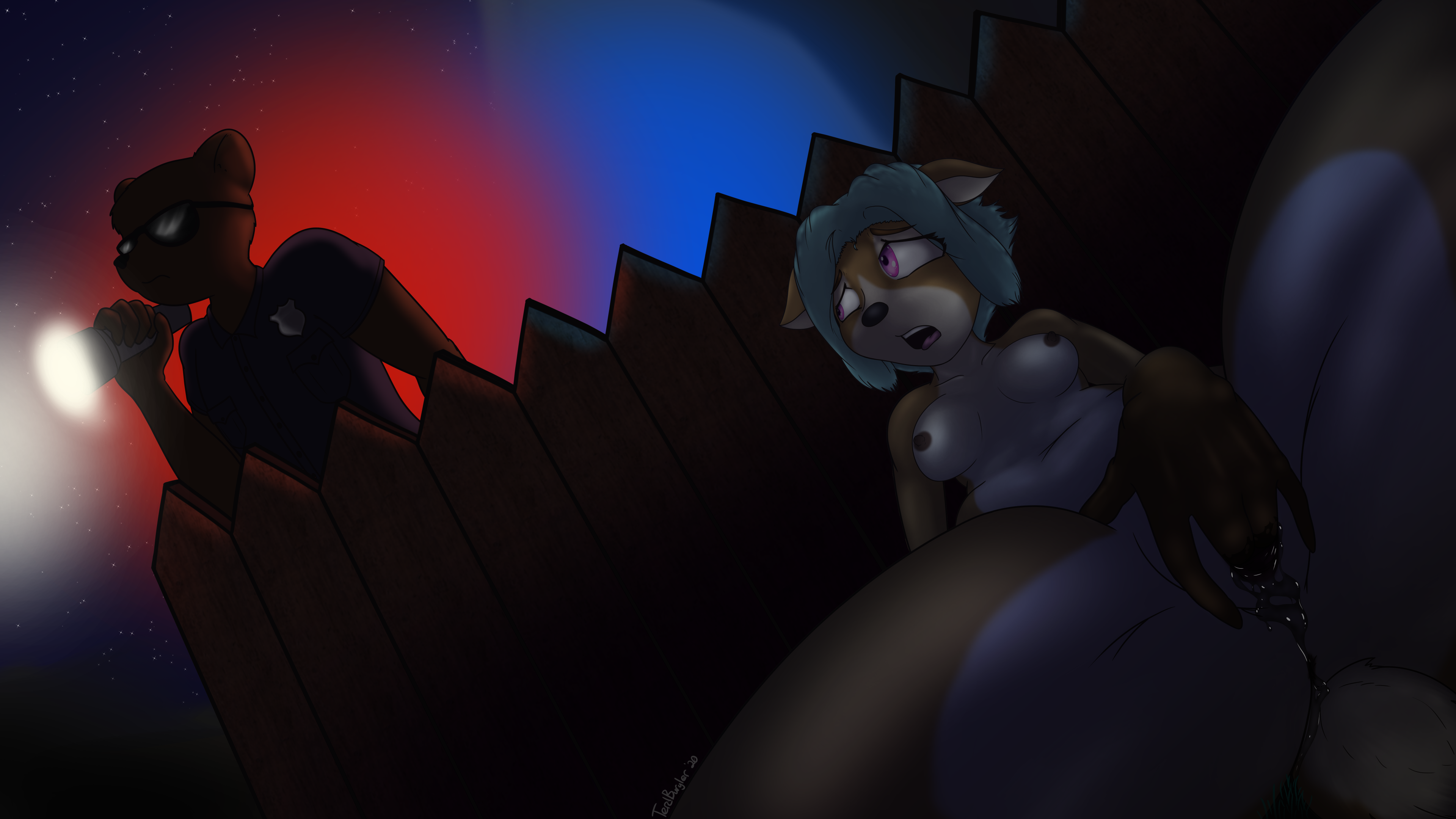 Brush with the Law

Wendy giggled to herself as she stepped outside. Her heart was racing as she walked out onto the lawn, feeling the cool night air against her naked body, exposed to the world. She opened her arms and twirled in place as if the eyes of a thousand onlookers were staring at her- though truth be told there were unlikely to be anyone watching her at 3:30 AM but that was part of the fun. You never knew who might be awake and who might be watching. With a flick of her deer tail, Wendy ran off into the night, sticking to the darkest areas as she navigated the neighborhood, seeing just how far she could get this time.

Darting from fences to hedges to brick mailboxes, Wendy's entire body was tingling with delight and she could feel her excitement start to drip down her inner thigh. She was getting to the most dangerous part of her journey, the one that always sent her running home. With how the streets in her neighborhood came together, it made for a single outlet to get to the next block of homes. The outlet was well lit on both sides by street lamps and emptied into a four-lane street which she would have to cross to get to the next neighborhood. The roads were usually completely empty at this time of night but it still presented a significant risk. Wendy licked her lips while her heart pounded in her chest. This was the defining moment. She bounced on her heels, steeling up the courage and then, in a burst of speed, she ran towards the outlet.

Time slowed to a crawl as she approached the illuminated crossing, caught in complete disbelief as she realized she was actually doing this. But as she drew nearer, she saw the street ahead of her illuminated by headlights. She dug her hooves into the ground, screeching to a halt but all she managed to do was stop directly under the street lamp as a car pulled up. It stopped directly in front of her and then, to her absolute terror, she saw the red and blue lights flick on. She stood there for an agonizingly long moment, frozen in her tracks and eyes wide in horror. She felt a new sensation of warmth between her legs before realizing that she had actually begun pissing herself. Oh Goddess, she was naked and pissing herself in front of an officer! She almost climaxed right there before remembering the urgency of the situation.

The spotlight of the cop car turned on but before it could swivel to her, Wendy was at full sprint away. The police rolled through the outlet after her, forcing her to take to the lawns and start darting through backyards. She fortunately knew this neighborhood well and was able to quickly lose the car through a side lawn but the sound of slamming doors came quickly after. They would be pursuing her on foot and though her adrenaline-addled hooves were running at a lightning pace, she knew she couldn't outpace an officer. She darted into the Morrison's back yard which had a gate into the Barton's, slipped past the shed and was back on the road on the other side of the block. But before she could make it to the other street, she saw the flash of police lights coming down the road. She dove for their side fence, narrowly making it behind the half-height cover before the car spotted her.

Wendy brought herself to the very edge, waiting behind the fence for the officer to find her. She heard him approach, seeing the light of his flashlight she knew he was practically on top of her. Perhaps he could even see her, digging her fingers through her folds right now. The moment seemed to stretch on forever, caught in pure suspense as she waited to be caught. But then, she heard a sound, a voice coming in over his radio and just like that, the flashlight turned off and he was on his way. He got back in his car and drove off, leaving her there in the still silence of the outdoors, fingers drenched in her cunny. A wave of relief washed over her, letting out a long, slow breath. She was alone again, the little exhibitionist doing a naughty little run-about. Wendy took on a smile, looking down at what she had already started and bit her lower lip. Well, she already came this far. She was going to finish herself off in the Lauritzen's lawn, fantasizing them watching after peering out their windows to see what all the commotion was about.