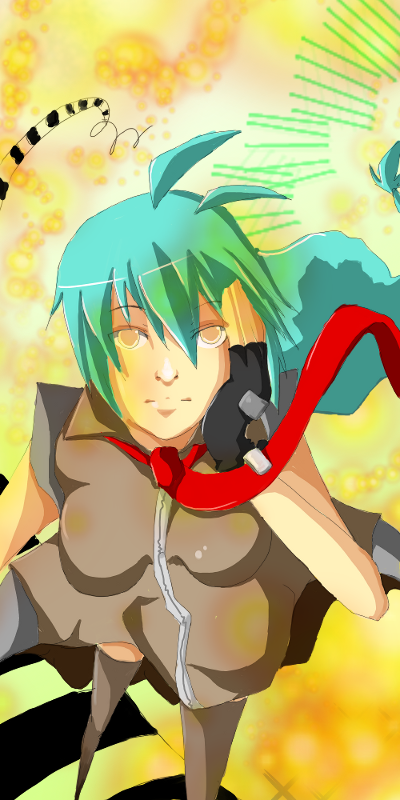 This is my part of an art trade on sheezyart.com
I should have made the lines thicker :/
Oh wells
TIS VI

i love how the orange and teh green contrast eachother on here...and yes, if you tidied up ur lines a little bit, it would be a perfect ten...i will give you a five anyways :)

just a bit of constructive criticsm

like TylinaVespart said below me, you should work on cleaning up your edges. you did a good job on the background but i feel like it's a bit distracting from the centerpiece because there's less detail on the girl than on the background. the cel-shading on the figure is pretty shaky too- especially on the hair. i couldn't see what kind of effect you were trying to aim for by making the shading on the girl's hair in the back kinda messy and then making it neat again way in the back.

you definitely need to touch up on the face and hand area. the lack of depth in the girl's eyes makes her look like she's in a coma or something. the eyebrow on the left side is lighter than the other, the eyes are uneven, the nostrils are a tad bit misplaced, and the fingers lose clarity as they fade to the left. the way her clothing whipped about made me have to search for her legs (lol). her boobs are uneven too =__=;; but maybe that's because her arm is pushing one side up? it still bothers me though lol. what i'm trying to say is pay attention to details when colouring and try to make the overall image cleaner.

don't take any of this too hard though. just a bit of constructive criticism. are you new to working with a tablet? if so, just keep practicing! you can only get better!

Haha ur boobiiiee comment was funny. And acutally I have had a tablet for awhile nowXD. Thanks for all the crituque. I mean I can't get better with out it XD. Yeah I acutally tryed getting the boobbiesss even buttt. I never draw chicks so I was like D:<. But thanks a lot! :3

Its nice, but possibly it could do with a little neatening up with your edges... Also that leg we see seems a bit suspect to me; too narrow perhaps? Colours are interesting, more contrast around the eyes would make it sing out a little more though.

Yeah i totally skrewed up the lines. I zoom in a lot, so when i zoomed out i realised that the lines were thin and I was like biss naaatt. But ima lazy person, so i said oh well. Thankies for the comment though . Much appreacated :3