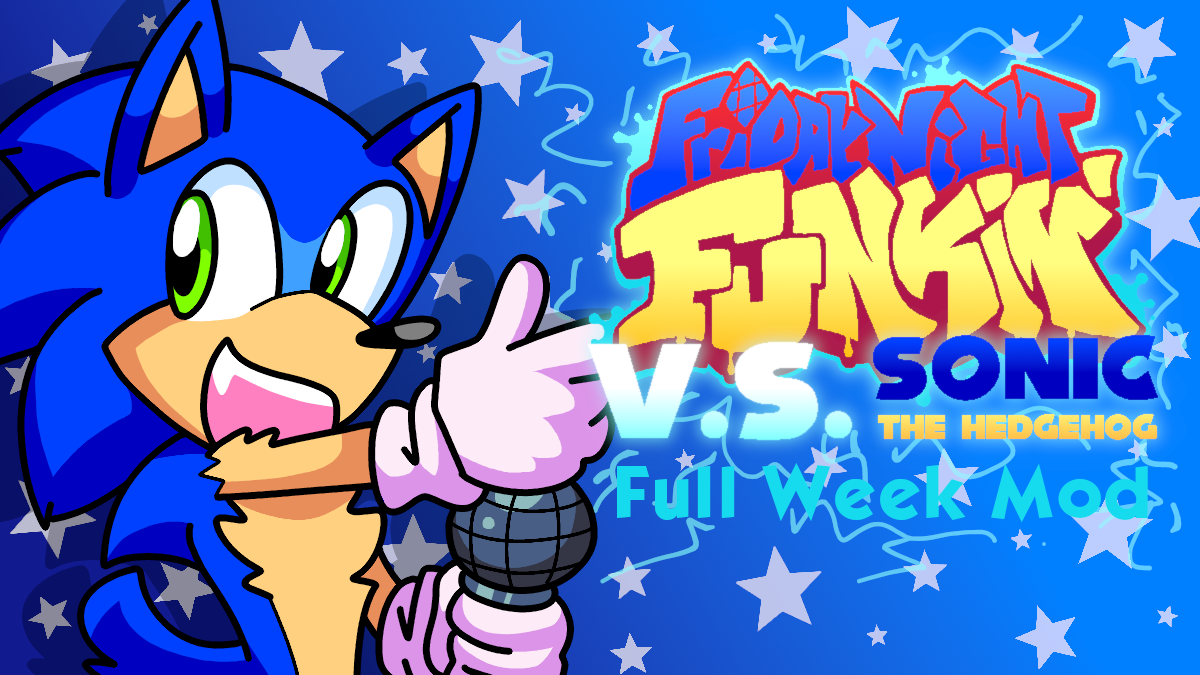 Hi, everyone! It's @SupaRedPikachu here, so guess what

I have not just updated the logo for my Friday Night Funkin' V.S. Sonic the Hedgehog mod, but also have a Discord server! Please read before you comment :)

Also, I've made up (and animated) some new stuff for my mod.

Three songs in order by level are:

Sonic: I heard you sing to your heart's content, so I started following your voice...

Sonic: Then I learned how to do the same thing, so yea.

Sonic: Well, I'm glad you made it in time along with this friend of yours by your side.

Sonic: Oh, yea! You like rap-battling with strangers... You know that bomb-faced maniac in a backalley?

Sonic: (Man, those dudes are strange.)

Sonic: Oh? You're right. So let's get this bad boy started then...

The first song True Blue is a original song made for us by my friend on Discord.

Sonic: So, buddy... are you ready for some more?

Sonic: If so, it's gonna have some rings in there that will keep you going straight forward.

The second song Rings will feature a ring mechanic in which you can collect rings by hitting yellow notes to gain lots of health.

Everytime you hit a yellow note to get a ring, Boyfriend raises his hand, doing a v-sign and thumb gesture with a smile on his face.!

Sonic: Ugh, I think you got me so far.

*Sonic puts his left hand on his hip, about to use his power.*

Sonic: Oh yea? Well, how about something shiny that will shock you?

Sonic: I know you hate lightning, but guess what?

Sonic: This is my power!

Sonic: I hope you're ready to freak out; it's gonna be like "thunderclouds". Good luck, buddy!

Sonic uses his electrifying power to energize himself, causing shocking white notes to appear in the third song Shockwaves.

The third song Shockwaves will feature an electrifying mechanic in which you could avoid hitting white notes that will shock you. If you hit one, you'll lose one third of your health.

If you manage to clear Shockwaves, Sonic couldn't store his electricity for too long and gets himself shocked (pun intended) by Boyfriend singing a double-note on his last turn. The hedgehog becomes exhausted for wasting too much of his power.

A rough animation of a cutscene before the fourth song Supersonic.

Once finalized, the music as heard in the video will be replaced by the "Death Egg Robot Phase 3" song from the game "Sonic Forces".

The fourth song Supersonic can be played in this stage. It's gonna be fast with a BPM of 200.

Super Sonic: So, how do you like that, buddy?

Super Sonic: Aren't you afraid of heights or stuff like that?

Super Sonic: Dude, I'm so glad that you made it into orbit, so did your crush.

Super Sonic: Hey, I totally realised how chaotic this is.

Super Sonic: Oh, I'm sorry about the mess I made up earlier...

Super Sonic: But look at all the stars, some planets and this cosmic stuff around us...

Super Sonic: I think it's amazing, so yea.

Once you beat Supersonic, an ending will be shown in which (Super) Sonic, Boyfriend and Girlfriend return to Green Hill Zone where they left off after having a good time in space.

*After the fourth song "Supersonic", Boyfriend and Super Sonic have a great time in space, with Girlfriend reacting to their performance sweetly.*

*They bring out a flash of light, which brings them back to Green Hill Zone where they left off. As they touch the ground, it emits a bright glowing light, causing the chaos emeralds to fly into separate places and reverting Sonic back to normal.*

*Sonic, BF and GF are having a rest after having a great time in space.*

Sonic: *Phew*... That was very tight. It's been a long time since I came out of this world as a superbeing.

Sonic: Well, I'm glad that you two are brave enough to overcome any fears while in orbit. Boyfriend: Bap?

Sonic: BF, your performance is killing it!

Girlfriend: I think he loves it.

Sonic: Aww yea; my first time meeting someone with an attitude like mine apart from Knuckles.

Sonic: You know what? I've been travelling across many different worlds in blinding speeds. Boyfriend: Bap beep skdee boup.

Girlfriend: Since you're good at rapping, let's remember this great moment.

Sonic: That's so sweet of you! BF and GF, you two are more likely of a couple of fan favourites people adore. Sonic: We all have something great in common; exploring new places, meeting new people and experiencing new stuff to try on...

Sonic: Also, I have a furry convention to enter! You two wanna come?

Also, I have a FNF V.S. Sonic mod development team who's working with me so far. They are:

One musician and animator couldn't be enough, so we need some more musicians yhat can help us bring some good music to our mod. We also need more animators for some sprites and cutscenes as well.

For more about it, click on my Deviantart Sta.sh page or my GameBanana page.

Applications are now open, so we're currently in need of more animators, more coders, sprite artists and more musicians as well! Please like it, leave a comment, and show us your work! I hope you enjoy reading what I made up!