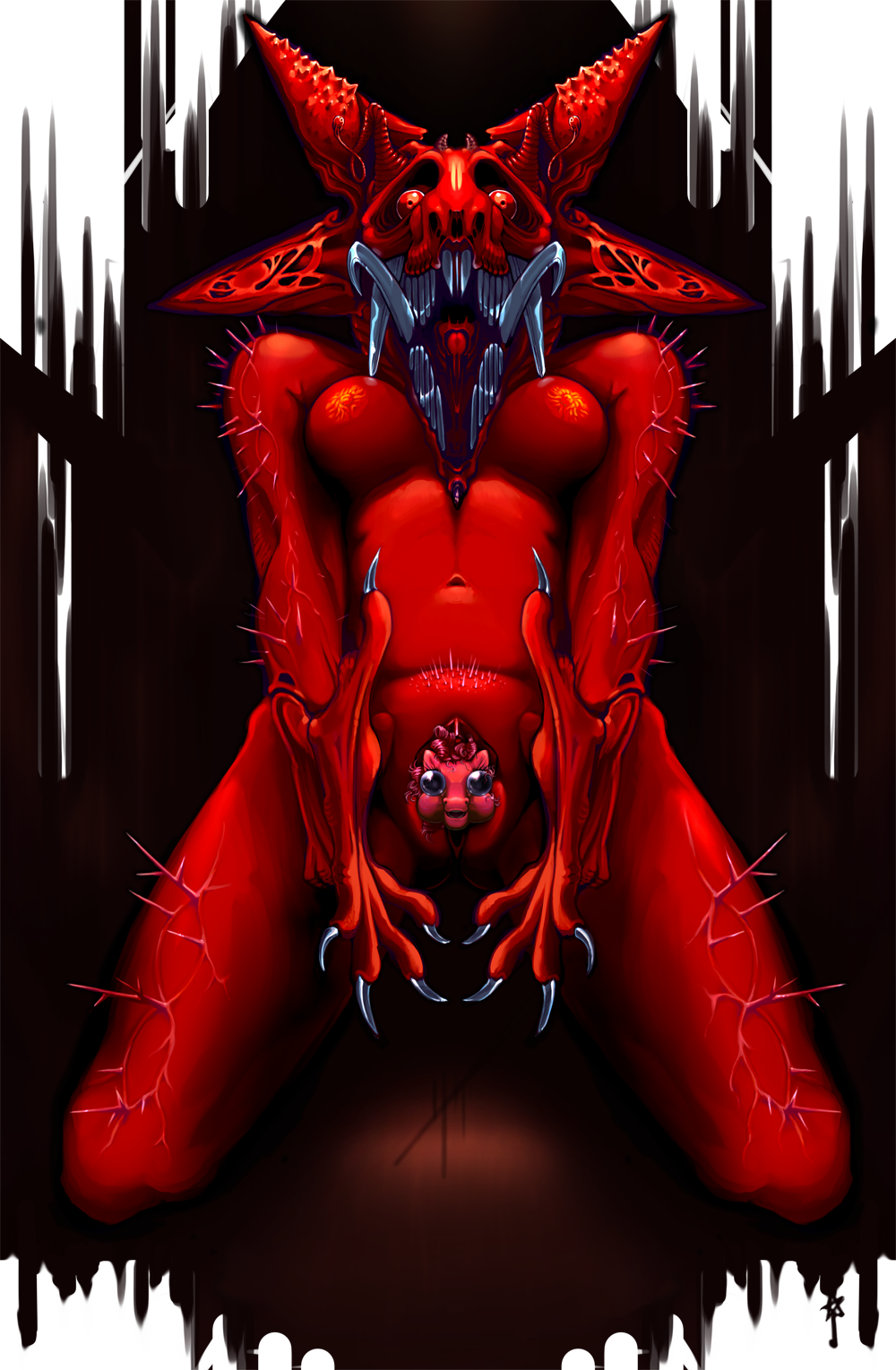 A woman above them all. her beauty wasn't of the earth's own effort, her skin flushed for me on her perfect contour. A smile that shone like heirloom silver. No blemish had dared to approach her, on body or within. How i wish i could have remembered our moments then and not what was only to follow! My dream, our embrace, ended. -By thorn- Her body reeled as if made of a million within a million electric pulses. My worry was briefly abated with anxious wonderment at what she, my shining pearl, could be producing, but then it raked over me in horrifying waves. Each pulse then erupted into budding spines, blooming vines all over her body, emanating from her centre as the abdomen revealed the seed responsible. It was horrible, a taut inflamed pink, it emerged in a tangle of sharp wiry unnourished curls that enveloped it as comfortably as steel wool. Its veins, cold with icy blue purpose throbbing within them; its distended jowls and puckered mouth readied to sing to me. Its song was one of assured conquest and corruption in sharp foul tones. My beautiful beacon was now completely transformed by the pain of this birth, her face contorted as a frame of terror for the hell in her eyes. She was gone to me, my only hope was to take down the demon still barely caged within her. I had no knife or bludgeon, my soul would surely be devoured if i laid hands on the encroaching beast. Wracked with grief, my hands ripped and clawed onto my only weapon, tearing the glassy daggers out of my bride's mouth, her mind being only capable of gargled delirium now. Nonetheless, my time in obtaining a weapon allowed the monster to fully birth from its sanguine prison and find purchase in the darkness. My head swelled and swung feverishly as i stabbed, again and again in the plunging black until i felt it stick.

The newborn devil had escaped me, but my blade had insured it's dark purpose would never live beyond its mortal host.

Wow, I knew this would be deranged. I didn't know it would be THAT deranged. As a brony, I'm still interested in this. It's probably mostly because of the story. Again, we don't need a literature portal. You have told plenty of it here!

I mean, it's wonderfully drawn! I can't say no to something that good. It was at least less sexual than a lot of these ZTV cartoons. The teeth are great. Yep, it's very scary.

lo, for i hath committed sin of the textwalling.

Art is a true talent, one gifted and one practiced. Either obtained, either achieved, all is the same though near the end that effort is given. Though, after viewing it for long enough and giving a thought of time. I believe this could have been better. I like it, it has texture and color, though I wouldn't call this indifferent either.

The only review as an excuse for my score rating of 2.5 is an average feel for it then impressed appearance. Guess seeing too much of the same thing often gets to you. Never was a good critic, though never was a horrible one either. Either or, I think in general, the author comments sets a unique deep in mind thought. Philosophical, morals, unwinding the mind from its binding wrenches grasping holds. Either or, it's all redundant( my statement ) of how you view it. Beauty is in the eye of the be-holder. I never understood that either... beauty, is beauty always a good thing? Never the less. I do like this art work and the author comments. It is very fetching and mind enjoyment to view. Though it;'s not something impressive enough for me to be mind blown. Pony in the pussy of a demon, I think more thought could have been given to the art work to bring out a more mind setting experience for those who take thought in to things. Still, I like viewing what work you have done, as every one is unique by the artist. Just, seems similar to my prospective.

Similar by the meaning of how things are approached. If it was for a disturbing value to make people eye widen and slightly jaw dropped, forehead rubbing effect such as, 'why would any one be so fucked up...' Sheer example of people's opinions. I think sure, yes, more approach could have been given and thought.

Over all, let's wrap up the review. I like it, it isn't overly outdone, it has great balance, the center of attention is dragged straight to the pony in the pussy. Which is wonderful for artist that they can control a user's attention to specific locations of their art work as desire. That was well done and got my half of the 5 of value.

The author comments is what killed it for me though. A story line that made me unable to connect the drawing image that soon was quit to lose my liking as if the same story has been told far too often in a different manner of words simply attempting to tie my mind in a binding. Perhaps I'm more closed off.. but I'm not sure what I'm supposed to rate more. The image, or the story, either or, I fair what was reasonable by both art and story. Perfect for the art, drop 0 for the story.

Yeah, that seems harsh, almost un-giving and unprofessional of quoting critic. The grammar was impressive and the thoughts of word usage was grasping for the author comments. The given and intake of thought deeply connected with the image and over all, it gave thought and prospective of given thinking from the conscious. I was debating on removing all the useless info above after given deeper thought and time, but, I felt why, it wouldn't make sense if critic opinion didn't leave behind their own mistakes. It's just not fair to edit out your own paragraph with out give a chance to take a blow. Critic opinions can be critic as well yes?

So, yes, no means of tiring the keyboard. I leave the rest of my post to view. Good work.