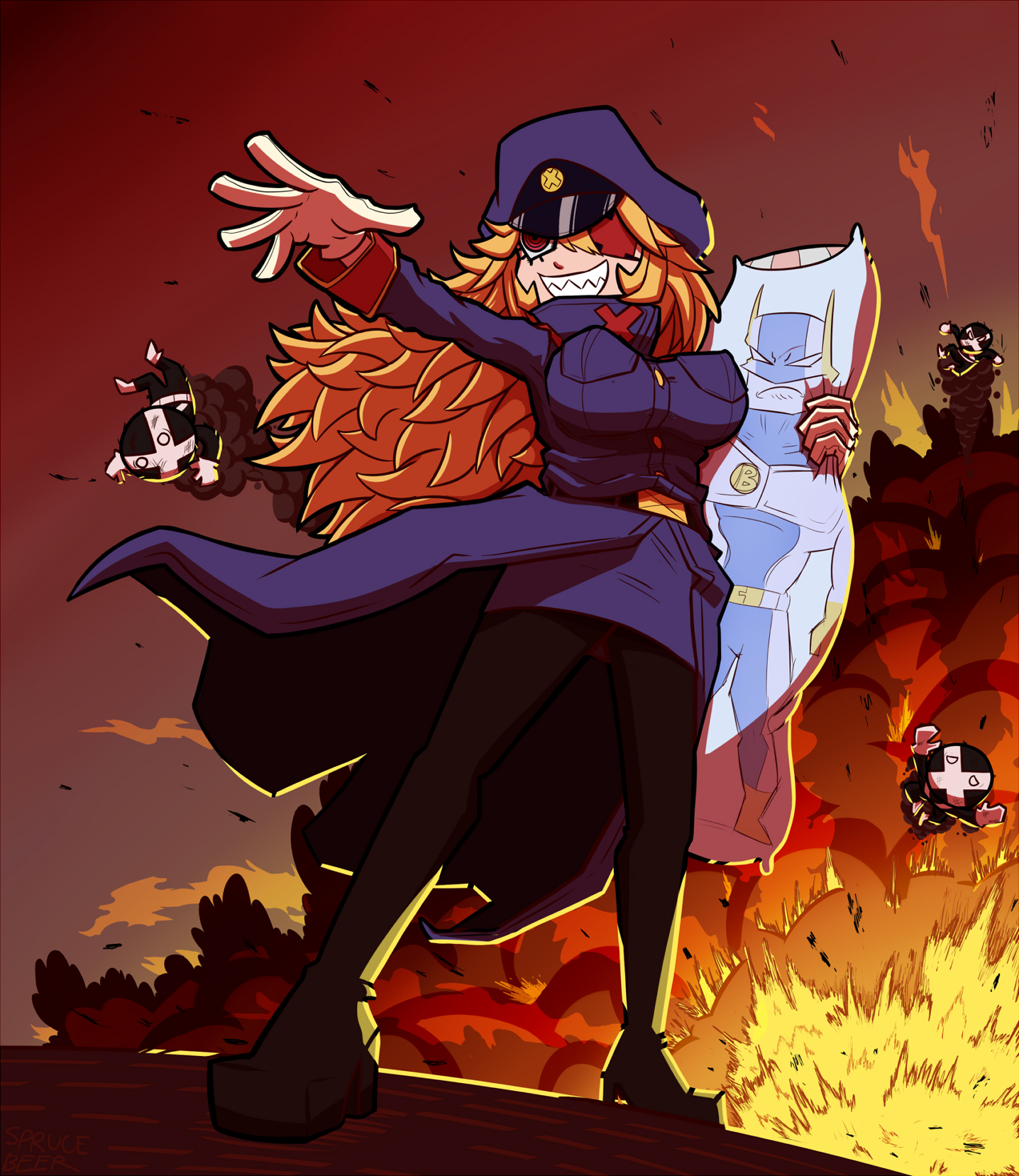 Miss Black General from from the gravely underrated manga ''Precarious Woman Executive Miss Black General''. It's somewhere between an episodic comedy and an ecchi, a funny book featuring boobs if you will.

I haven't seen much art at all and there's already 4 volumes out, and while the first half of the first volume can be so-so it really picks up afterward and stays top notch.

So this was great that fire and flames was nice would have been nice if the flames themself had more of a reflective visual or more brighter even just an idea, doesnt take much to make something decent just some time and patience is all it takes, and thats what you have shown here today so keep up the amazing work.

Thanks, I'll keep an eye on contrast in the future!

The legs aren't placed a way in which they can be connected on an "eye-pleasing" way, meaning the the structure they're atatched to is the style's projection of a demormed hip.

About the style: The usage of shapes is quite messy. Some places, have sharp edges at the end of a long limb, smoothly outlined in black lines that get thiner or thicker for the purpose of ginving depth... and some other places have what looks like kiddie-cartoon bushes rather than smoke (bottom left, top of the signature).

Good fading at the top left. Curious choice at the bottom, on the bushy smoke... I like it

Also the short big-headed midgets in the back are very different from each other and have sketchy features, not toony ones, sketchy ones.

The fire looks parody-comic-like and the lady "cool edgy". Also, not the breat expert, but her left boob lokks rotated in respect to the other.

The body is chest short, and the legs long, both in a different fashion.

The right hand is too claw-like, and the dakimakura it holds looks too dark at the bottom.

The mouth is imperfect. Nice eye. Cool hat, it suits the body and arm, though maybe it could use some more shadowing on the left..

I like the colours very much, good for a poster of the lady, the explosion isn't that eye-catching.. The hair calls my attention a lot, it stands out, good job if that was intentioned.

I like the light on the back foot too, it suits the ground texture. About this second element, it doesn't seem to match with the lady's bust to me. Just realized the smoke in the space behing her legs is cammo-looking, it looks unfinished to me.

Thanks for the feedback, and yes I do agree that some parts look unfinished because they kind of are. I'd never really drawn an explosion or weird perspective before so after some trial and error I got frustrated and left it as is.
Which is to say I'll make sure it doesn't happen as much in the future.

Great artwork to garner interest. It raises so many questions. Why does she have a Batman body pillow? Who are those little guys jumping to thier doom? Clean lines, highlighting, bursts of colour, interesting characters - a lot to like.

Thank you! I'm really hoping the manga picks up some popularity here somehow