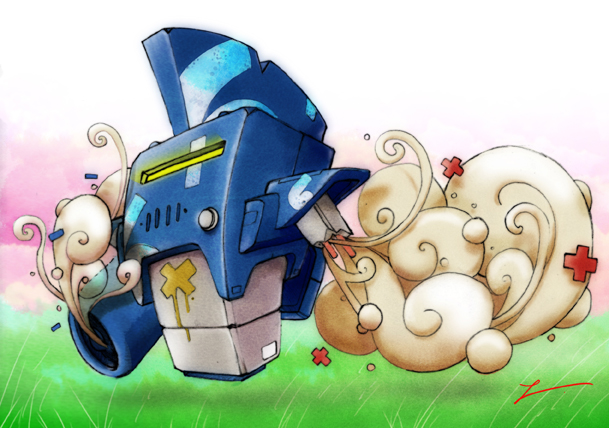 I didn't seem to like this as most people because it didn't make much sense to me. Granted, that's never stopped me from liking something before, but the artwork doesn't seem that good. I've just seen so much fanart I keep thinking it's based on some non original character. I like how this robot is sporting a mohawk. You rarely see that on robots and it looks cool. The way the smoke looked so poofy made it kind of look like farts.

I mean, it's just that it was coming out of the robot himself. I like how the little red crosses are being arranged everywhere. This seems like something that would be in the Dr. Slump manga. It really is delightfully cartoonish, even if it isn't the most appealing picture out there. There also appear to be some bits of blue stuff that are flowing out of the robot's arm.

Nice style for a robot, adding in those elements

i like your style =D good drawn e good colors