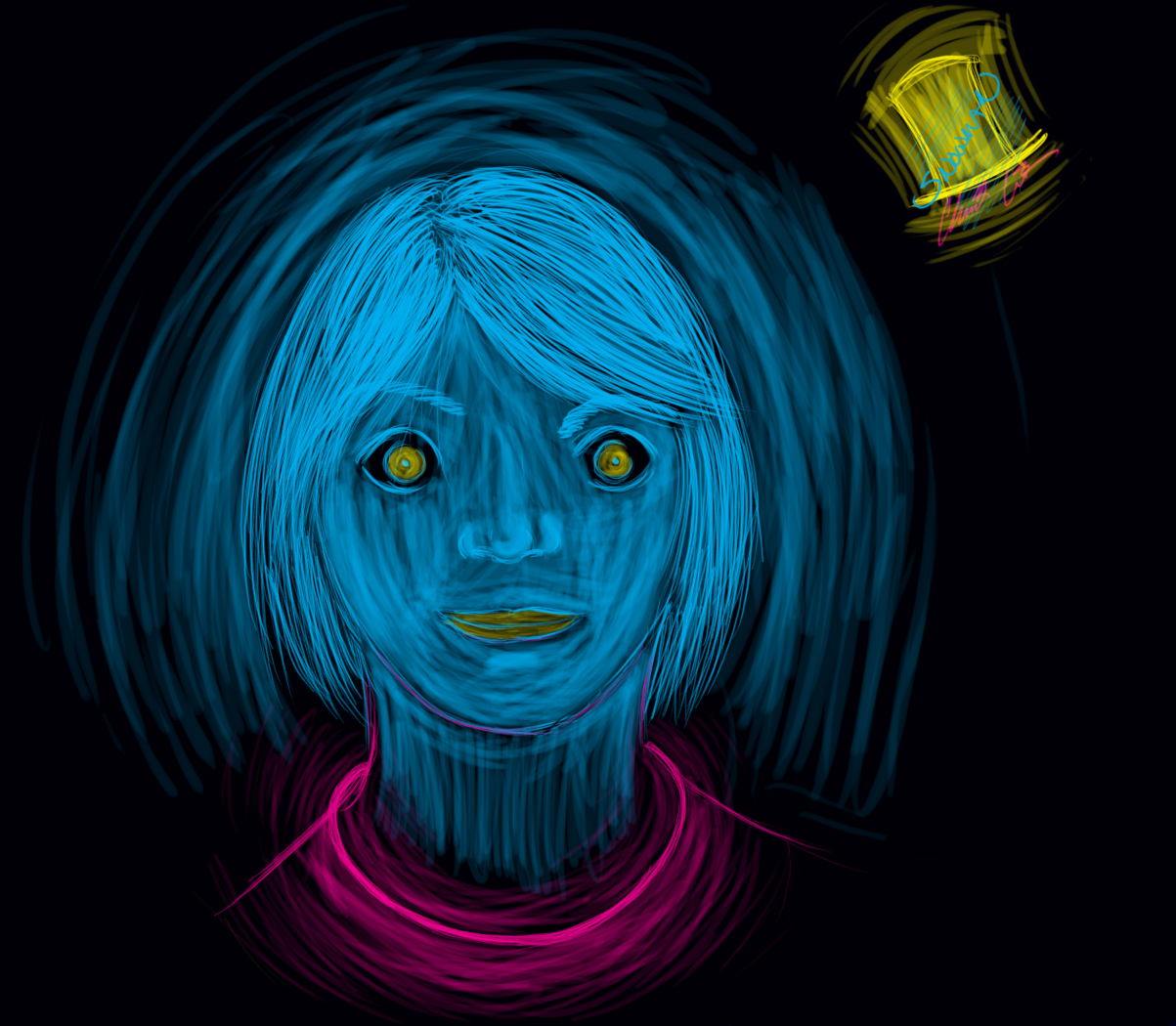 I got the idea playing with some glow sticks. Came out exactly as i wanted

Now, before you go all "ZOMG HE VOTED LOW BURN HIS ASS", just hear me out. Or more likely, grab a drink and settle down for the read. I've noticed that not many reviewers like to put much effort into their reviews so much as just commenting. I don't know what's up with that, I just keep and keep. Anyway, I can appreciate what you've tried to achieve here - that is, recreating the effect of glow sticks waving about into a picture. The problem is you haven't done it very effectively, the drawing itself looks cheap, and there's a complete lack of detail in the picture (even darkness can have detail).

The basic glowstick effect you've been able to recreate quite nicely - that is, having one of those kids that you don't really like waving his hand up and down really fast to create a trail of glow that, when ordered right, can create a picture. The problem is that the glowstick trails are extremely messy in some ends yet minutely detailed in other (compare hair - neck) and while other parts you've actually outlined colours with other colours. While this isn't only impractical, kids having the motor skills of, well, a brick, the yellow eyes being sourrounded by a fain blue outline is also unsightly.

My advice would be to put more emphasis on there being glow stick trails. Point out beginnings and ends of trails, have them much more bright to the source as compared to simply being blatantly done with a lowered opacity brush Photoshop (well, that's what it looks like to me. If you're not doing that, using a different program and actually putting effort into it, then stop what you're doing and defect). You can also shove detail into here too - have the lighted glow-sticks at the ends of the trails, grabbed by grubby little hands and try to paint this picture as an actual piece done by kids holding glow sticks, rather then a product of glow sticks. Like, without the grubby little hands.

I'm not saying there should be grubby little kids with grubby little hands and spleens ripe for the collecting, I'm just that this piece, as it is, is weak. No strength. Kids with their spleens intact can, somewhat, fix that.

As for the drawing itself. Well, Not all picture of women have to be lookers, but an egghead that looks like it came straight out of a backyard flower-shop isn't exactly attractive to look at when shrouded in all this illogically existing glow stick trail. Your proportions are fairly off - that nose does look like a facial tumour - but it's ugliness is kind of accelerated by poor positioning and structure, You moved it to the side in order to accommodate your signature - which, while not "un-fine" is kind of incentive to believe that the picture, isn't the main attraction.

Anyway, much potential for a picture, but as it exists it is pretty damn weak, shallow, and whatever other words I con conjure up for a picture that has no real substance. No sugar-coating it.

I find this review to be very helpful. I see what your saying to about everthing, and on some rainy day i will most likely be retrying this and keeping this review right next to me.

I find it funny how some have voted this review to be useless.
Honestly , I wish more people would review like this, the only thing it could do is help me fix my mistakes and improve. I dont see why people get all butthurt when they get reviewed under a 10.