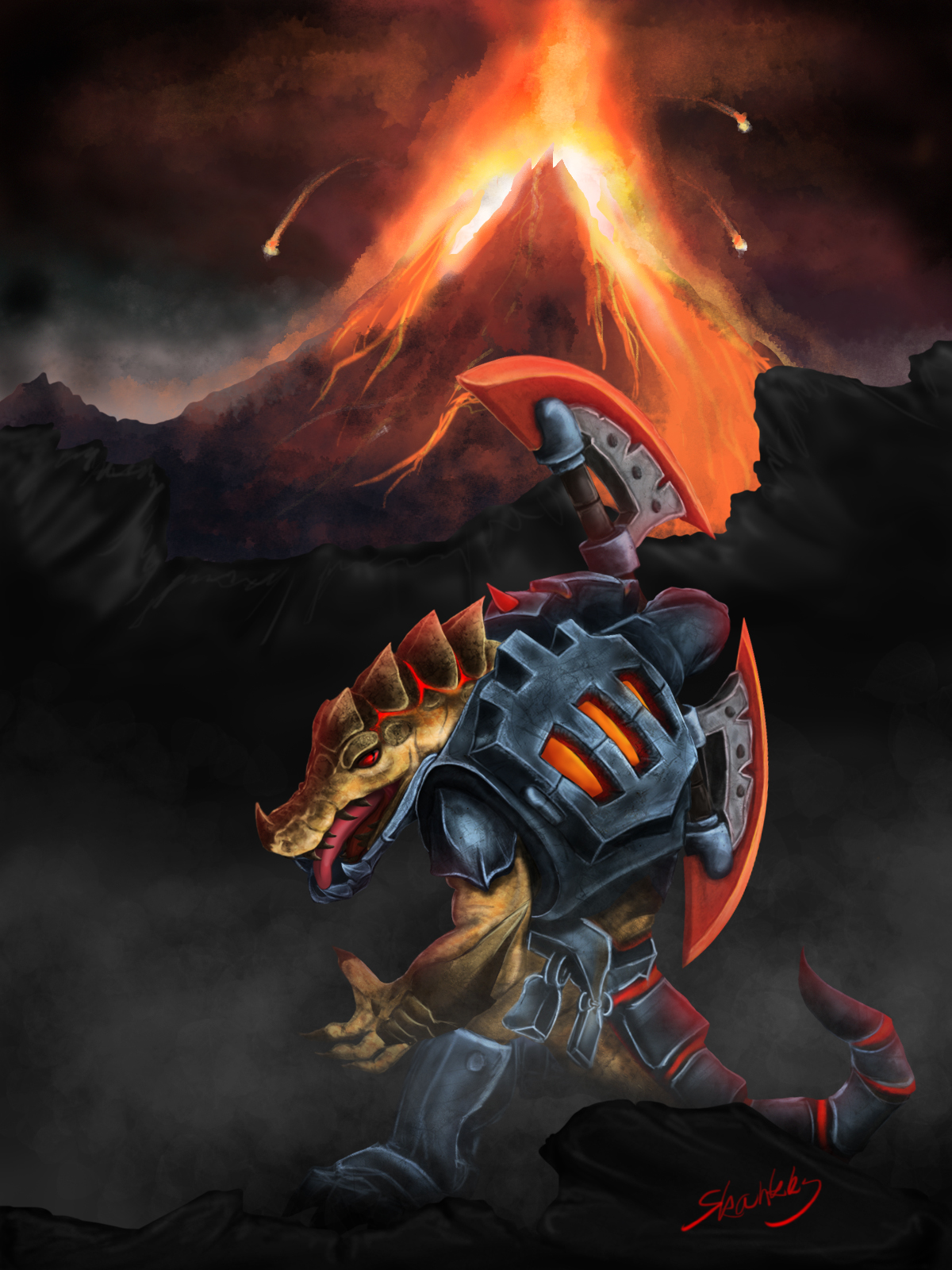 Hi there im new here and this is my first Digital Painting with my very first Tablet (wacom bamboo) so please some comments whats wrong/good :) so i can improve myself :) thanks :) (sorry for my english btw :D )

Ah, yes. The skin that will NEVER come out.

Top lane just got a whole new level of fucked..

He looks very still, but it looks like you were going for something more dynamic, like he's in the middle of a movement. What's his left arm doing (seriously why is his hand open like that), and why is he holding his weapon crazylike? Like, you can see if he rotated his hand to be pointing at you like he's punching you, the weapon's edge would be pointing upwards, which doesn't make a lot of sense visually. Better to place those arms in more extended positions that let you show off the weapon without making it look janky. (Also his legs could use a different posture--having him be off balance in the moment implies motion, making the whole thing more impactful.)

Also his tail is really, really curled up. Looks kind of painful.

I like the face, but it says "sly" rather than "murderous," which is always kind of what I thought Renekton looked like. If that's what you're going for, though, it worked!

I really, really like what you've done with the colors and shading. The background specifically looks fantastic, and I have no complaints about the subject either in that regard--his skin looks especially good and you really created the visual feel of "leathery" very well. (Of course now that I said that I notice the white outlines on the things dangling from his belt, which is distracting. I guess I do have one complaint after all!)

So that's that! This is solid work, and I'm glad to have seen it, but you can sell it way harder, and I hope you do so for future projects.

Thanks for feedback I really appreciate it! :) This was just my first drawing with tablet ever so there are many mistakes but i have plenty of room for improvement i believe :) And i agree with everything you said :D About left hand... i redraw it like 5 times and after that i was like screw that ... i cant draw hands -_- I must work on that definitely... About that "murderous" look ... i didnt much think about that honestly... I just drew it and didnt thought about any emotion.. now when i think about it i should :D it would look better if he was looking more reckless i think :) ... And im ashamed of that belt thingies :( it was last thing i drew and i just wanted to be done with it :/ so sorry about that :D I really like your feedback so if you have some free time could you please look on some of my other work? :) thanks! :)

I think the body is a bit too much sideways, or head a bit straight to us.
But its still awesome!

One of my favorite LOL characters!