When Will He Get His Dues? 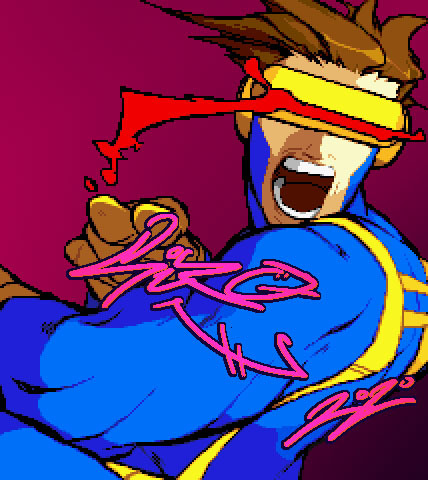 Didnt come back in Infinite, no respect in tha movies, what's in it for him?

U wanna see my art firsthand?

Follow me on these links to see my artwork str8 from tha getgo!:

Fantastic. I love the pixel art 16-bit quality to this. This really reminds me of the golden era of CPS1/2/Neo-geo games. COTA is the shit, as is MVC.

I'll have to peruse your gallery later.

I don't know too much about Cyclops other than stuff about him from the animated series, but I think he was a good character. I mean, he was a good choice if you played him in X-Men vs Street Fighters. Maybe the later portrayals of him weren't that good, but I think the 90's cartoon version of Cyclops, in my honest opinion, was the best Cyclops.

It's a bit sad to find out that the very voice actor who portrayed him, Norm Spencer; had passed away yesterday at the age of 62. I mean, I never knew the voice actor's name until now, I wasn't interested in identifying voices when I was growing up in the 90's. But his voice was easily recognizable (though I didn't know he played Billy Blazes from Rescue Heroes). Even now I can hear his voice from memory of decades gone by.

Good-bye, great hero, and thanks for making our childhood memories one we can remember.

For real, shoutout to Norm for giving him an iconic voice. Shame he passed away

The laser bleeds from his eye as it's the last thing you see.

I always liked Cyclops; never understood the hate for him. I've never read any of the comics, but he always seemed fine to me in the cartoon and games. I hear hes a boyscout, but so is Captain America, and everybody LOVES ya boi Cap.

Also when it comes to super powers that ARN'T "op-plznerf", Rouge, Wolveriene and Cyclops got the best ones imo. And when it comes to powers you would want in real life, and ironically video game character lineups, who DOESN'T pick the character with the projectile attack? Or in his case, laser eyes. Honestly, its a no brainer for me, if you had Cyclops powers, and you can see it, you can hit it; you LITERALLY cant miss! I've heard some stupid shit about it being "energy from the..."punch dimension"...", but wtf does that mean? And as far as I'm concerned, both still move at the speed of light, and cut through anything. Cool in my book.

Exactly, anybody that likes Cap would prolly like Cykes too, their moralities r pretty similar, from what I seen. & ofc I like playin him in any VS game hes in!