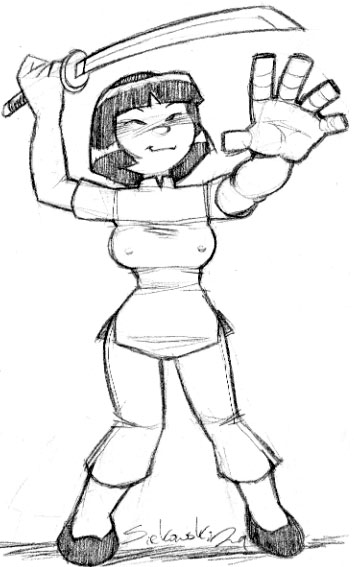 Inspired from the GiJoe line of Combat Heroes toys.

So this was notbad it seems more like a sketch then anything else but it isnice its simple and subtle, could use more to it then, a few suggestions might be, something in the backround, some more fine lines ofcourse this is just the starting stage so i understand, and last but not least some color or a touch of color, a shine on the sword wouldnt hurt kind of like a sparkle of some sort, and another thing might be to amke the "CANVUS" larger in scale, would give a whole better look and allow for more detail all around here, so anyways a good sketch you have here would love to see some upgrades as suggested.

~~THINGS TO IMPROVE ON~~
To start off i must say this was a pretty good art piece, it could use some work though so i have suggested some advice and idea that may help, but overall i liked what you had to offer, keep up the good work, Adding a touch of color to your art here wouldnt take away from the black and white style, but adding just a touch of red or blue, so dont fill the whole drawing with color, im just saying adding a touch here and there will ad abit to it without taking away from the main drawing. You could make a Larger Canvas so that you could ad much more stuff and beable to show off some fine detail that you may have not been able to before, on the size you do use, it makes for some better results on the art as a whole, but other then that i thought this was actually pretty good stuff.

Ah, this is better

If you think I rated this higher because it has a hotter character in it...you'd be absolutely right. What also makes this work is that I am more familiar with your style. Gosh, it's been so long since I've played with GI Joe toys. I still have like one toy in my room and I can't even remember the guy's name! What's really cool about this is that I think this is a more realistic pose. It shows better proportions, not like I don't like cartoony ones.

This seems to be a nice blend of the more realisic and cartoony parts. I swear the Blackie has some of the stiffest nipples I've ever seen. Does she put startch in those things? The lack of color makes me realize how good she looks in purple. I like how the digits are done in this, particularly with how nicely they seem to be represented, you know.

awesome artwork i love the stance and the look of confidence in her face. :D