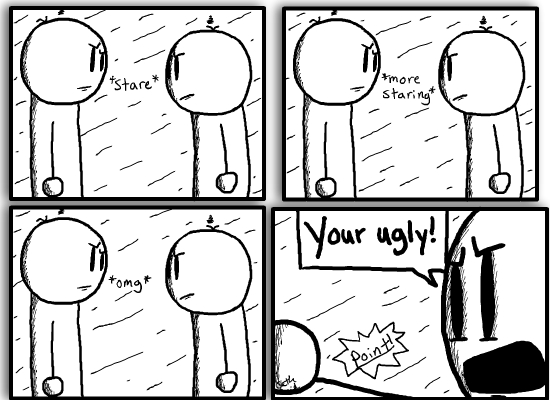 A short very random comic I made, Let me know what you think! =D also I will take requests for comics, just give me a storyline and script and ill do it, there is only 2 rules, i only do 4-6 frames for comics... I will only do up to 3 characters in one storyline, so just pm me and let me know! =D thanks!

I gotta say, I love your comics.

First, I love the drawing style. Its kinda got a drawn on paper in math class feel, but its still neat and clean.
I also gotta say that I love your humor. Keep at it. I added you to my list of favorite artists.

Wow thanks dude, it's always cool to know that people enjoy my work... Thanks

its just plain funny is all.it kinda short though.

yea this one is pretty short

The humor is highly unoriginal. Even though the comic has only one line of dialog, it still somehow manages to contain an error. "Your" indicates possession, for instance: "your burrito" or "your poorly written comic." In the comic, this would seem to indicate that the stick man is accusing his opponent of owning an ugly. A more acceptable response would have been "your ugly face," or even "your ugly face revolts me, you cad." If insisting, however, on continuing to follow what I figure was your original plan for this comic, you would be better served by using "you're," a contraction standing for "you are." In this instance, "you're ugly" would directly correspond to the insult "you are ugly." This, however, would be much more effective when delivered in the form "you're ugly and your ugly face revolts me, you cad."

didnt know the spelling cop was in town

i love your comics

so very random and so very funny, also i agree you should make more flash

thanks, and im trying to work on more flashes, thanks for the review