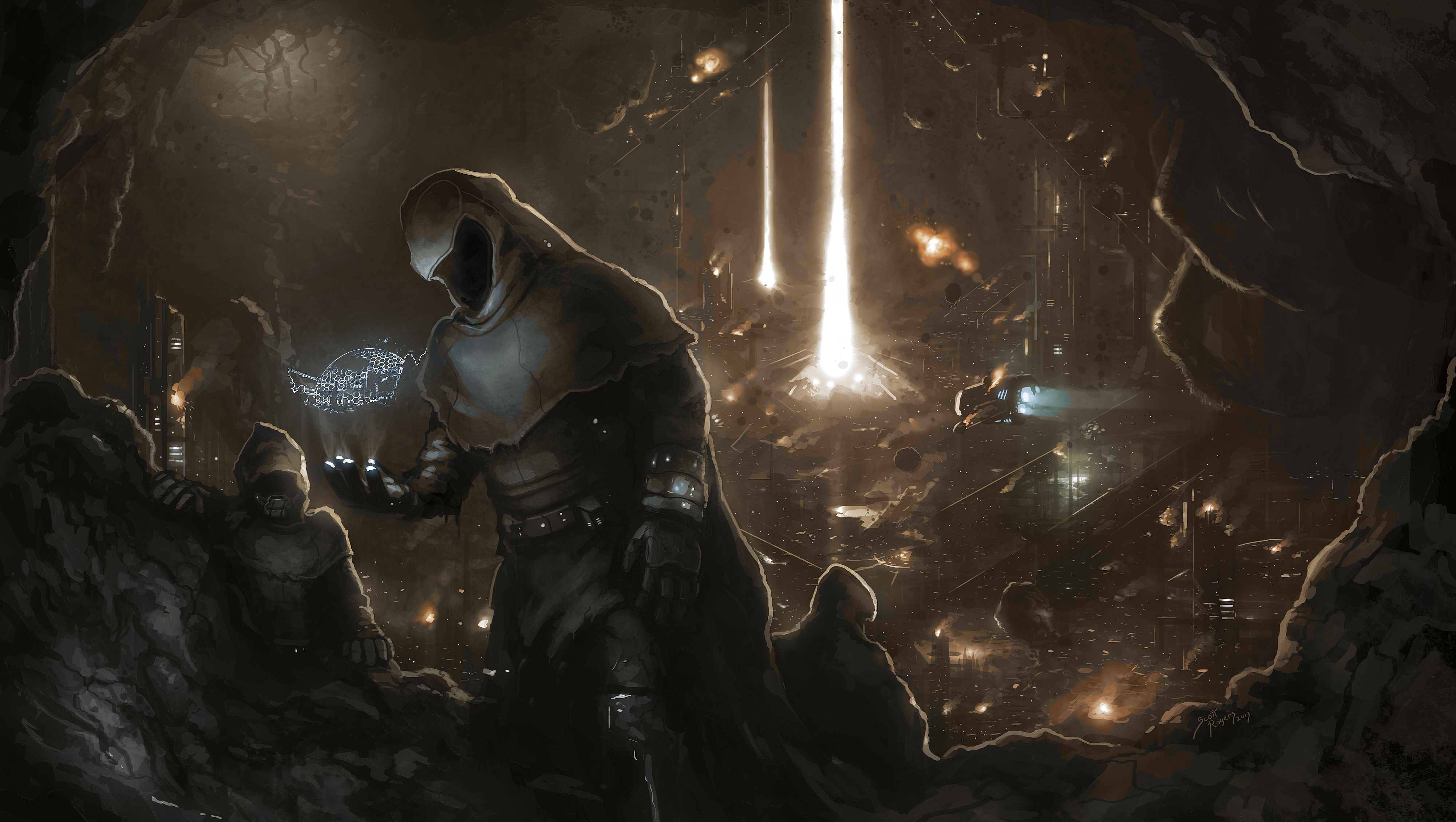 Inhabitants of a falling civilization leave for the surface.

For the 3rd and final round of the NewGrounds Music Triathalon NGMT '13 Edition.

all of the drawings i see from you makes me amazed!

Dark and industrial with beautiful lighting, texture and detail. You're really gifted with backgrounds, I feel that I could learn a lot from your art, keep it up, bud.

I just adore the amount of detail you put into this image. And what a canvas! I usually have to stick to something rather small so that I get the right shapes, but this is just amazing. You took some pretty good advantage of the size too, giving each object depth and distance. Even the lights in the distance seem to twinkle and glow like the stars, as city lights usually do. from afar, it seems as if almost every single detail is swooping in at you. But by getting a closer view of the image, the brush strokes and other lines are more clearly visible, as well as smaller details.

However, that can also take away from an image. When you put a blurr of strokes in to make them look like an object, they can come together well at a distance. But coming closer and seeing these strokes, it really seems to put disappointment in someone's mind to see that the details aren't really quite so clear. Though it doesn't count off much from this image, it does have a slightly sad effect on the outlines of the humanoid figures among the rocks, making them blend in a tad bit too much. It seems almost as if they're part of the background, whereas the actual background pops out more- you don't quite want to pay attention to the character. Because the background is more prominent, it catches your eye more. The hologram seems to have stronger line art than the characters.

I'm a little bit of a hypocrite about that, as at times my backgrounds have less clear line art than my characters, which works against me.

However, I can't deny this is still a stunning view of a city I never knew. It kind of makes me want to climb through the screen and scrablle ont he rocks to see what's below.

Thank you very much for the critique, my friend. I agree and admit I rushed this a bit and so some of the details aren't so good up close. The biodome is sharper because I took that drawing, scaled it down and modified it to what you see here. Anyway, I'm glad you like it.

Ahhhh I see the Biodome there ;D
This is just great, another amazing piece of perfection.

You're too kind, thank you! :D Yep, this is connected to the Biodome (and Monochromatic World). The Biodome plans would allow them to live on the surface and escape their crumbling civilization underground.

Thank you! :) At first I had him holding something that projected the hologram, but changed it that it was part of the glove and came out of the fingers.