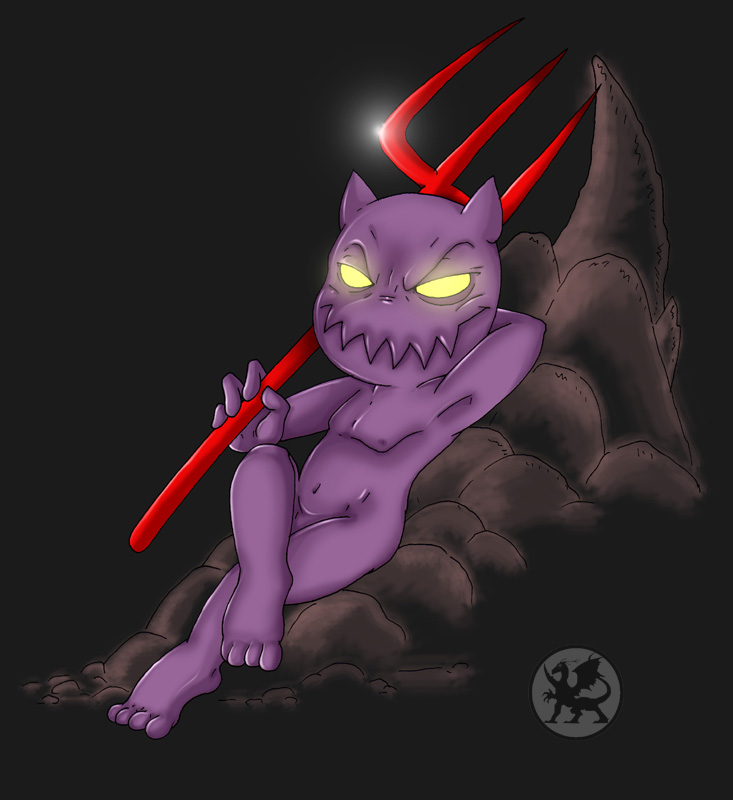 I like this little dude...he luv so much his job that cute XD and i like the way he talk.

here the first game of the serie

Art done by me Sandragon

It's nice for you to pay tribute to such a great character. I think the best thing about him is how he smiles. His lips make it look like he's all roughly cut up or maybe has tentacles or something. It's fun to see him with the red pitchfork like that. I couldn't help but think you were trying to make him look attractive. I just generally don't see him with nipples.

You spelled "Character" wrong. It seems like the rocks he's on is similar to his appearance. I say this because it has a spike at the end like his weapon. Well, it's not really a weapon, more of a symbol. I can see why Lilg likes this so much.

cool! btw do you guys think there should be an angel on the game? Like,i'm not the artist,but,pretty much there's only Hell and demons and the Grim Reaper and stuff, but no Heaven activity!

This is cool. I like the Reincarnation series, but I think this is a bit... uhh... graphical. Dah who knows? There's one soul that does his evil ways and these demons will be unable to get... and that's Hank.

im a horror fan movie ...so .. lol .. im not realy disturbed by bloody stuff and ect..thanks anyway for the comment XD

Yeah for sure its planned by evil ..he dont wanna be liked lol XD thanks for your comment and appreciation.

cooo draw but he looks like more a old greek girl statue or a f@got..any way is cool