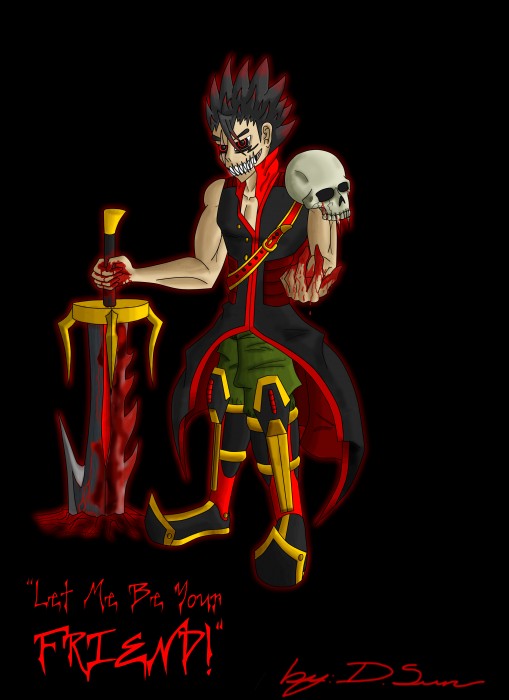 every character has some kinda issues... my avatar has a demon living in him :3 It grows steadily each time "Shin" (my avatars name) gets angry or has evil thoughts. Also that Demon (gotta find a name for him) can appear as illusion next to Shin, only visible for him. So it would look like if Shin was talking to himself if he's actually talking to the Demon XD. and maybe the demon will be able to take controll of Shin oneday...
However this is still the first stadium since Shin hasn't done that much evil yet...

The empty hand is very good. The biceps also look good and I have no complaints about the skull. The boots are interesting and remind me of dark knights from Final Fantasy mixed with Gundam-like things.

You're great at drawing Gundams and guns, but your people and anatomy need some work. Even with your Gundams, I think the main problem is that you make the legs too short. If this guy's arms were extended down, his hands would touch his knees. They should only reach about halfway down his thighs and the wrists should be close to in line with his crotch. He'd look more like an anime character if the legs were around 1.5 to 2 times longer.
The angle of the boot facing us doesn't match the rest of the boot's angle.
The muscle lines on his forearm don't look too good.
The hair looks like your average "anime beginner" attempt. Those small spikes just don't really make sense being there. It makes it look like he has very short hair for the most part, but then long spikes in the back... but the long spikes closer to the side just make it look very amateur. Anyhow, he'd look better without the small spikes.
His legs have a very awkward pose here; they're too close together.

He looks alittle... Flat but other than that awesome

yeah... the shading's not stressed enough -.- I kinda messed up there

good but leave the sayings out

two things i have to mention is, one, it looks like that grimjaw dude from bleach,or atleast the tophalf of him does. two, he looks alittle....stiff? Try loosing him up, make him bend or slouch alittle, stuff like that. Even a demon human thing isnt so ...scrunched together? Just trying to help, and it otherwise looks pretty freakin awsome.

XD ok I'll try to avoid this stiffness next time!