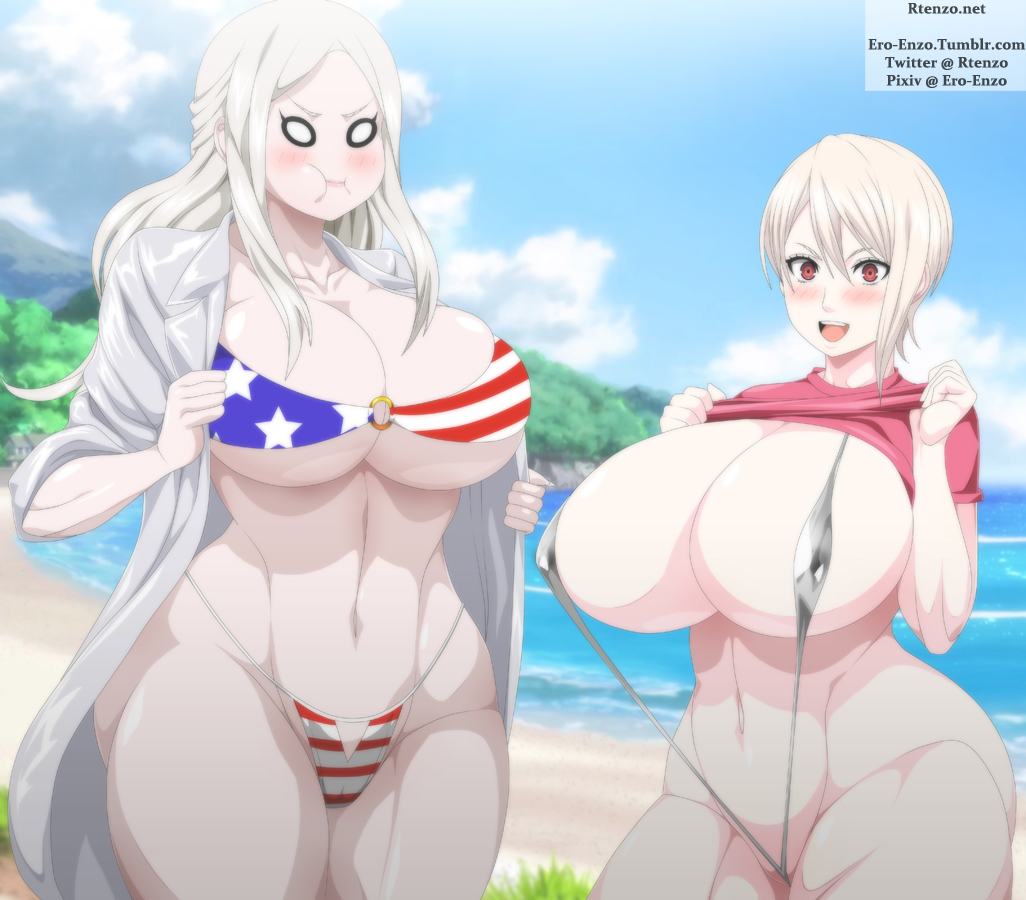 Showing Up and Busting Out

If you like what you see, consider supporting me on Patreon!
https://www.patreon.com/Rtenzo

“It’s nice to finally have a chance to relax with you, my dear,” Leonora told her daughter, turning her face up towards the sky to enjoy the sun. The sand was pleasantly warm under her feet, not yet too hot to walk on. Her smile turned sly as she glanced at Alice. “Hopefully nothing will happen that will make you cry for nine hours~”

Her daughter pouted at her, cheeks puffed out, and Leonaora silently congratulated herself on still being able to get that kind of reaction from her. “You’re never going to let me live that down, are you?” Alice grumbled, kicking at the sand petulantly. “I wasn’t used to losing, and I’m still not. It hit me hard, that’s all.”

“Completely understandable,” Leonora assured her. “But you’ve learned from that defeat and become an even better chef; though I’m sad you lost, I am proud that you were able to move past it.” She said, referring to Alice’s defeat at the Autumn Elections.

“Yeah…” Alice said softly, smiling, before shaking her head and putting on a more normal grin. “But enough with all this mushy stuff! Let’s enjoy ourselves on the beach and forget about everything else.” She needed some time to relax and unwind; things had been hectic and nonstop for what felt like months.

Chuckling at her daughter’s antics, Leonora nodded and slowly unbuttoned the shirt she was wearing, reveling when the eyes of the crowd all swung to her. It was only natural, of course. With her exotic looks and fantastic body, only just covered by the bikini she wore, it was no wonder that everyone in eyesight was staring at her. Though she could do without the drooling of some of the harder hit men…

Even Alice was blushing slightly, though that didn’t stop her from giving her mother a dry look. “Are you hoping to impress someone?” she questioned. It was just a little uncomfortable seeing her mother in a skimpy bikini like that, with so many people staring at her with clear lust and longing.

“Always,” Leonora replied immediately and without shame. “A Nakiri is constantly striving to impress and make a statement.” She had seen that girl from Alice’s dorm, Ikumi Mito if she wasn’t mistaken, wearing something very similar to this. Seeing how much attention the younger woman had received, Leonora had elected to take inspiration from her, and thus far, it was working brilliantly. It was very flattering to be the object of so much desire.

“Well, you’re certainly making some kind of statement,” Alice muttered, before grinning wickedly. “But since you put it that way, I’m sure you won’t have any problems with my swimsuit.”

She pulled up her own shirt, so fast that her tits bounced wildly, almost breaking free. Not that it would have taken much; the sling bikini was so skimpy, it only just covered her nipples and crotch. It was miracle that Alice wasn’t flashing everyone just by breathing. Muted thumps rang out across the beach, men and women alike passing out with huge nosebleeds and goofy smiles.

Leonora gaped for a moment before pouting even harder than her daughter had. It wasn’t fair! Why were Alice’s boobs bigger than hers?! She was her mother and older than her; it should be the other way around! Noooo! She should be the one getting all the attention!

Smiling like the cat that had gotten both the canary and the cream, Alice sweetly said, “Don’t worry, mother; after our day is over, I’ll be happy to listen to you complain about how great my body is. It’s the least I can do~” The way her mother’s face got even redder made her giggle.

Sauntering down the beach, pulling her shirt the rest of the way off as she walked, Alice couldn’t help but smile at everyone now that their attention was on her. Ah, what a great day indeed!

I’m getting the hang of this!