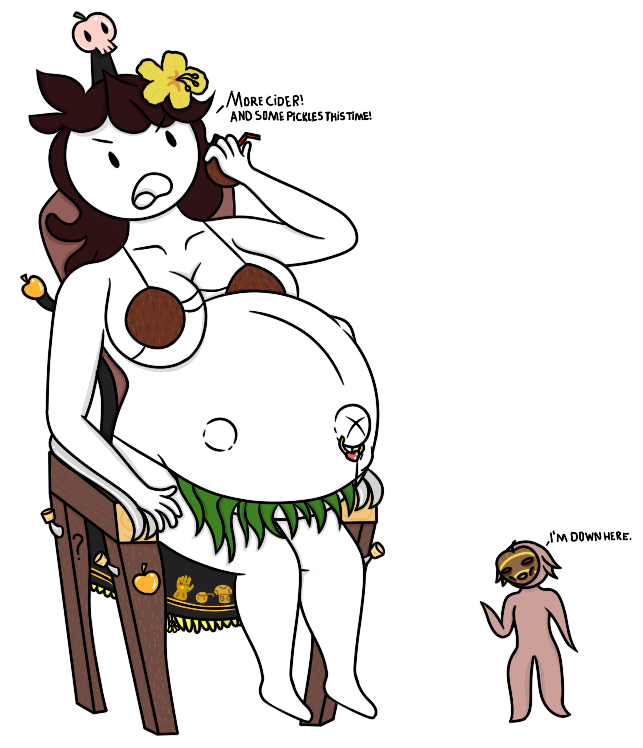 Guess what, the history is different this time. It's all started into a sunny morning of summer, Jaiden was resting in a beach chair, near to her offspring's origin, James. (TheOdd1sout) "Ah~ such a lovely sun." Jaiden spoke, rubbing the sphere of skin she had in her torso, with a large and in curve linea negra, outie bellybutton, that also had an piercing, an heart-shaped apple. "Not lovely as you honey~" James spoke, and proceeded to rub the seed carrying tummy.

Some time passed, the sun went down, making the sky orange-ish, as Jaiden was having trouble to get up, huffing after some hard kicks, as James would come to her, first rubbing her round tummy, and holding her hand to help her. As Jaiden would thank him. "Thanks James, I hope the day I go in labor will be easier". She spoke, "As well you could add some more in this tum after it~". Jaiden said, in an clear innuendo, slapping her round tummy afterwards

In their way back to a 4 stars beach hotel, Jaiden heard a noise from the bushes, and didn't want to sound weird as she decided to follow it, "Uh! I need to use the restroom, and the hotel ones are too gross!". Yelling, and quickly running to the bushes, clearly not actually going to use them or actually doing necessities, as James just stared, but kept walking. Back to Jaiden, she walked by some nature's product, exotic Hawaii animals, plants and even stopped to pick a flower and use in her hair, as after hearing the noise once again, she started to be in her way again. Following the trail of a small humanoid creature, with tentacles as hair and limbs, tribal mask, and had no genitals.

After huffing by taking many steps in the wild, Jaiden leaning in her own knees, but for some reason, the small creature had what it wanted, as it spoke to her, revealing a masculine voice "Greeting Ma'am, am the servant of seed carriers, I wanted you to arrive in my place, as it's not usual to have pregnant women around this land". Jaiden did show confusion by his words, but didn't question anything, as he spoke once again "Sit down, I will bring you anything you desire". He directed Jaiden to a wooden throne, but would be comfortable as there was a black cushion attached on the part to be sat on, as well metallic parts, and another long cushion in where she would have the rest of her body.

By her wishes, she asked for some apple cider, and the little man in seconds pulled out of his mask a coconut filled with the liquid she desired, with a straw passing by a small hole, giving it to Jaiden, she took a large sip from it, and in 2 minutes made it empty, as her babies started to kick inside the uterus, causing visible bumps from outside, cravings were starting "More cider! and some pickles this time!." Jaiden yelled, looking up, and the little man before realizing her wish, said "I'm down here." pulling out both desires, a jar of pickles and more cider, he gave both to Jaiden, she again drank the cider inside, in some sips, and proceeded to open the pickle jar, she could not "Ugh! go on stupid jar!." Jaiden spoke in anger, and knew what she needed to do, "Open it for me please...as well, can you bring James? he would love to see what you can do". The little man turns his back to her, and removes his mask, and quickly a male figure comes out of it, a muscular one, not like an hyper-steroids one, but one in the attractive yet healthy level. On this it had an appearance that was incredibly similar to James, and opened the pickle jar easily, as Jaiden spoke "Woah...now I wanna see what he can do~" she said, rubbing her belly, and forgetting that she already had an actual offspring's origin