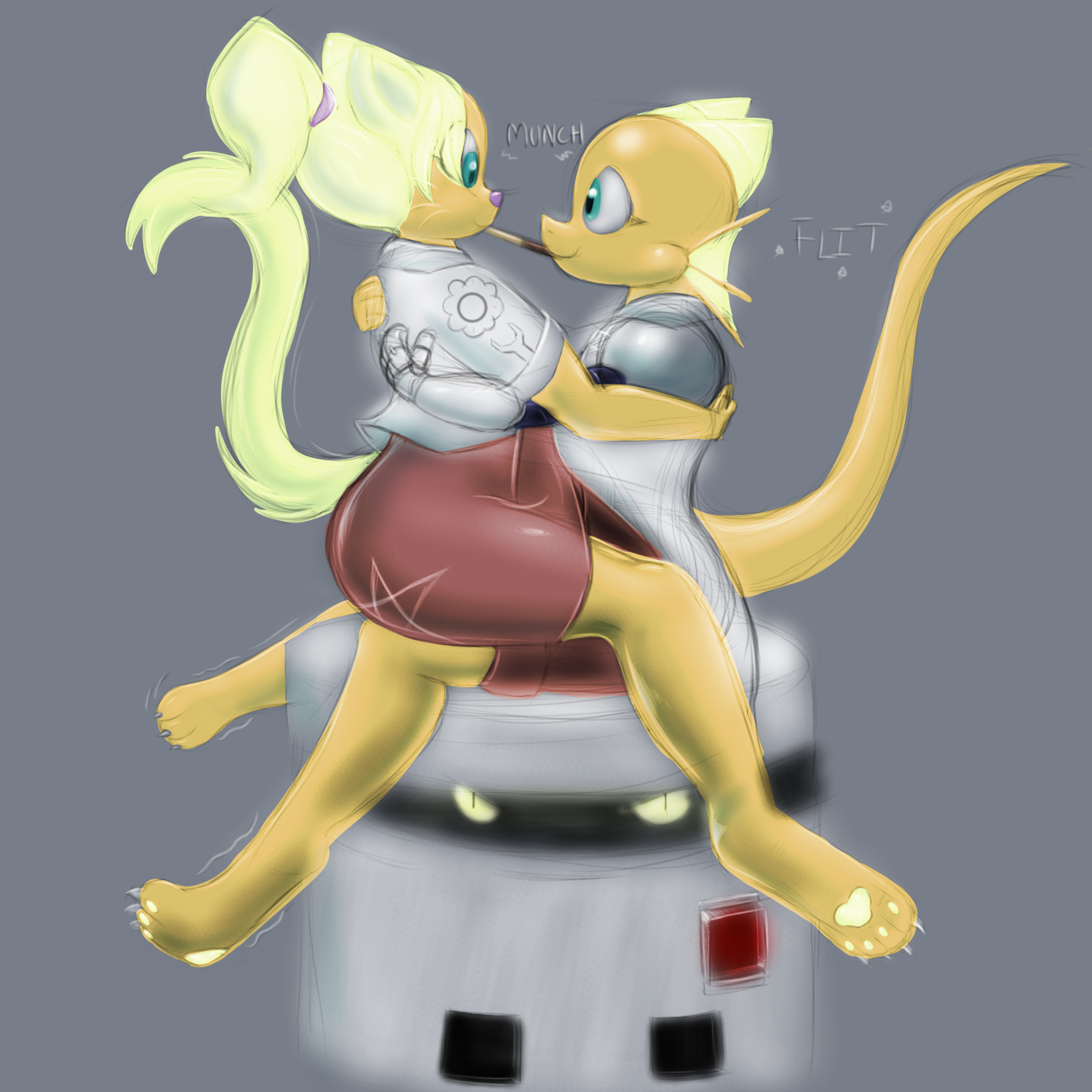 deviantArt | FurAffinity | Twitter (Art) | Pixiv | Derpibooru | Weasyl | Inkbunny | SoFurry | Newgrounds | Discord (Art & Emoji Only)
--
If you are interested in playing Starbuster, the source for official information on how to get the latest version of the game is here: https://twitter.com/Starbuster_Game

Cassie and Other Cassie got caught stealing Cook's pocky. They heared about The Pocky Game at a bar and thought it sounded like a fun photo op and just a neat way to pass the time. But when they got caught, they found the easiest way to stop him was to simply sit on top of his armor.

He will absolutely shoot them both as soon as they stop sitting on top of him.

If you like this double-Cassie pairing, I have another picture of the duo with one wearing CONSIDERABLY LESS CLOTHES BELOW THE WAIST here: https://www.deviantart.com/revelromp/art/Month-of-Cassie-07-Double-I-Shaped-Balance-857449849
--
Baxter's bar on Deck 3 of Union Station served as the day job for "Catssie". She liked the work, was pretty good at it. Though she was mostly using it as a means to build up funds to launch her own party and costume business and was moderately open about this fact. For a while, Cassie (of the Petrov) became a regular at the bar. The similairites and shared interests between Cassie and Other Cassie (who started to go by "Catssie" to reduce confusion) led to them starting off a budding flirty friendship. A fan of cosplay at heart, Catssie decided to emphasize their similairites for photo ops and goofy laughs at work by donning a new top and dress patterened after Cassie's top and pressure suit. However, Catssie loathes the feeling of clothes on her legs and foregoes shorts and trousers whenever practical.

(Day 1) Three days before Union Station was raided by Imperial forces, things at the bar got rowdy at the bar. More than a few drinks into the night, one of the patrons started being aggressively foward with their advances on the workers. Seeing an opportunity for a bit of fun, Cassie interveined to draw attention to herself and started to play a few tricks with witty language and slippery movements. The advances quickly turned into threats, then into haphazard punches. On instinct, Cassie snagged one of the drink shelves with her robot arm and brought the whole thing down on top of the drunk and ending the fight conclusively. As her bubbly laughs from the sight started to fade, the amount of damage she just did sunk in through her inebriated thoughts. Hearing the shouting of the bar owner and fearing a prompt escort to jail, she fled the scene hoping that things would just be forgotten after a while.

(Day 2) The next day the owner's feelings were quite clear. Cassie would never be coming back into into the bar, not after that. It would take far more than a week's worth of good business to make up for the lost inventory, not even factoring in the work to clean it all up, ordinance fines for not preventing the fight in the first place, and lost visitors put off from the violent spectacle in the middle of their night out. Cassie was banned. If anyone from the bar caught her on premise again, they should remove her on sight.

Catssie heart sunk with the news. She worked through the rest of the day as best as she could, but couldn't focus. The events of the night prior kept playing over and over again in her head. She felt her get twist tighter and tighter, like she would break at any moment if she couldn't go back to having that little bit of liveliness in her life to look forward to. Half way through her shift, she resigned with a mumbled and unclear explanation, feeling certain that if she stayed one more hour she was going to break. While her words were incomprehensible, anyone with eyes could see that the events of the night prior had shaken her up in some way.

Unsure what she would do next, she wandered around idly for a while, then started to ask around about Cassie to see where she was staying during her visit. Nobody on the station seemed to know anything about Cassie that she hadn't heard for herself from talking Cassie up at the bar, idle chat with one of the Deck 14 shopkeeps brought her back to the topic of the Petrov. The Petrov? Didn't Cassie mention something about the Petrov before?

(Day 3) The start of the was spent picking up supplies and making orders in preparation for making her online party and constume shop her main day job. But travel time and waits in each task gave her plenty of time to consider her next steps. She knew she wanted to get aboard the Petrov if that's where Cassie was. But as before, nobody she asked seem to have ever heard of the Petrov before. She started to lose hope, wondering if perhaps some of the stories Cassie had been telling were lies. Or if Cassie herself was a deceit of some kind. After all, creatures of her kind were considered exceedingly rare across the entire galaxy. What were the odds that one such would visit _that_ specific bar on _that_ specific station near _that_ specific section within an entire galaxy's worth of space? The call of a stranger broke her line of thought.

"Cassie!? Cassie, what are you doing out here? Aren't you supposed to be doing combat drills with Mav and Rizz right now? They're gonna have your tail if you don-" The engineer in a helmet dressed in a full on pressure suit and far more belts than necessary stopped to look her over. "Oh SHIT! My bad, I had you mistaken for someone else!"

Catssie turned to stop the flustered engineer who was already taking steps back out of the way.

"Wait! Stop! You're from the Petrov right? Are you hiring? I want in!"
The engineer stopped in place, looking the Catssie over again more closely. For an instant, her expression hardened. Then melted into bafflement. Catssie rushed to put her thoughts together, her mind still flooding with memories of shock and embarassment from the past two day's events.

"Sorry! I know it's sudden. I heard about Petrov at Baxter's Milky Leopard. I used to work there. I know some places to get good work on some settlements not far from Union Station, But I want to come along."

The looked Catssie right in the eyes, seeming to give this some thought, then shook her head.

"Dunno where you've heard of us, but for that you'll have to go through the Captain. We're a bit busy with work today, but if you give me your comm number, I can pass your number along once things slow down."
--

The rest of the day was spent cleaning up, packing up her supplies for the travel to come. If she got the job on the Petrov, she was going to have to move all her things there and get a taste for space travel. If she didn't... she would figure out what to do when the time came. What else did she need? A gun? She remembered her childhood shooting lessons, but hadn't bothered with a proper gun since moving out on her own. If the stories she heard at the bar were true, it would be a no brainer for her to arm herself with something stronger than her natural claws for travling to other planets. And a space suit? How much do those even cost? Surely the Petrov would have spares?

Realizing how quickly her savings were draining away just for the _chance_ of being somewhere else- not even a sure thing- was draining. She started to question if she was sane. Why was she like this? And yet. She knew in her heart she couldn't back out now. This is the only path that makes sense. Not like she could just go back to her old job and expect things to be the same. And for all of her doubts, she had been wanting to expand her side gig for years now, and the chance was right here. How could she not?

(Day 4) Explosions. Fire. The sound of firearms, laser cutters, and the sounds of the suffering. Those would become the memories of this day that would stick with her the longest. It wasn't her first time seeing someone die, but it sure was the first she had seen so much community and property needlessly wasted.

During the imperial attack, she made her way towrds the docking bays looking for an escape. On the way there she found a kid, terrified and lightly injured, scared that she couldn't find her parents to evacuate. Using her own communicator, she was able to track down the child's mother and escort her there safely. While neither the child nor mother had said it, it seemed clear that the child's father had died trying to protect her from the attack that injured her.

Running out of time and options and not seeing the Petrov around anywhere to try to get her way onboard, she talked the widow into taking her on board her own ship where she could work to earn her stay. The Phantom Trap is a small transport ship intended for short duration trips between nearby planets, not long sustained travel for several inhabitants. They agreed they could go hit two or three planets or other settlements to look for a place to hide and work. But with Imperials in the local airspace, nothing nearby is going to stay safe for long. They're going to need a warpdrive or a new ship, operators who know how to use it, and they're gonna need it soon. And all the while Catssie is still holding onto hope that she can catch up with the Petrov and its own Cassie somehow...

(Post Union Station) This ultimately leads Catssie into her own misadventures. Unlike the Lizard she is infatuated with, this Cassie is soft, fuzzy, and squishy. She doesn't have a robot arm to rocket punch robots to pieces, nor a grapple hook to let her reach heights when the average person could suffer a fatal fall for less. For her, survival is a matter of moving fast near the ground/walls/ceilings/objects to use as launchers for her wild pounces, being clever with her inventory, avoiding hostile confrontation entirely, and using her network of contacts and social skills to get things done that she can't do on her own. She has a gun and she has her claws so she's not worthless in a fight and she knows how to take cover when there's the option, but like most humans one well placed laser, missle, or bullet and it'll be all over if there's nobody to get her back to safety and nurse her to health.

Not having a space traveling company to back her, she relies on negotiating contracts and deals with others to hitch-hike her way across the galaxy in an attempt to catch up with her counterpart's crew- a crew heading into steadily riskier and shadier places by the day.