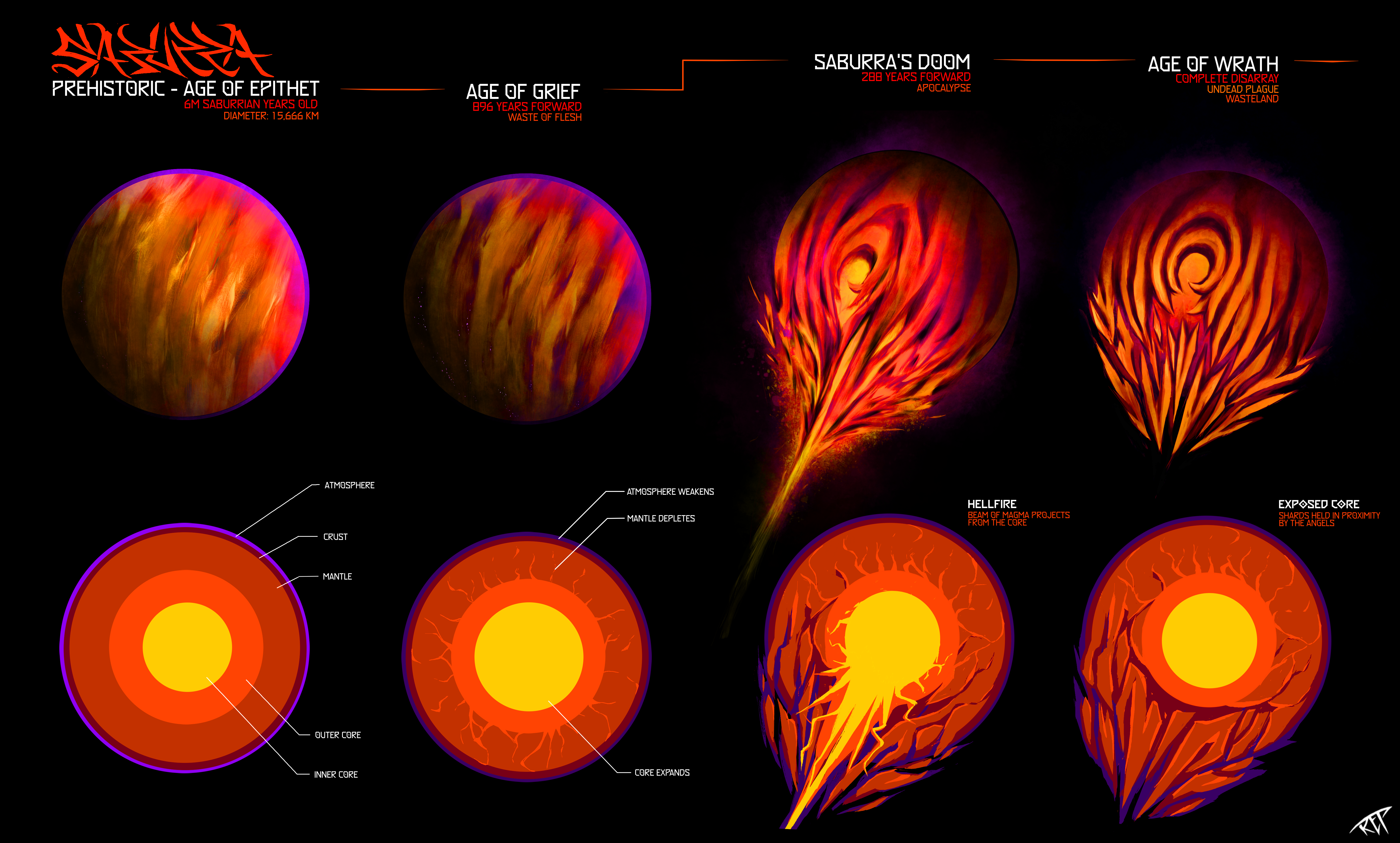 SUMMARY: A hellish blistering rock rich with metal, oil, and disease. Once a seemingly average desert environment, with life and animal inhabitance, manifested into a plagued apocalyptic nightmare. The shape you see now (Age of Wrath | After Saburra's Doom) is the result of industrial enslavement, anarchy, and the rotting corpses of those who die on the surface. (Curse of Saburra)

Saburra's fate is set in the decaying hands of "Waste of Flesh" to dump colossal heaps of junk and wreckage onto the planet. Using it as a scrap yard for their destruction after the collapse of the industrial era. The remaining humans left from this madness fight and survive between brutal cults/gangs/factions to horrifying plagued creatures formed from the Angels. They use whatever technology or lost fragments of destroyed civilizations they can scavenge from this metallic coated landscape.

This age marks the beginning of Saburra's horrific fate.

Galactic hierarchy commissioned an undead imperial alien species by the name "Waste of Flesh" (WOF) to strip the planet of its valuable oil, Ichor. Because of this resource's unnatural qualities, WOF abused the labor of human enslavement to operate the mining facilities under fatal living conditions... importing millions of human refugees from across the galaxy including other intellectual species.

Saburra's mantle becomes fragile as the core overheats and expands.

Centuries pass as countless lives are worked into their unmarked graves. WOF continue their rein of destruction... causing humans to form rebellions across the planet in attempt to break free from their shackles. Sparking a new era of war and anarchy - collapsing the era of imperial industrialism.

Numerous plagued souls from the battles fought during the Age of Grief began to clog the planets oil - boiling it to unsustainable temperatures.

Leading to the rare alignment of the three planets of Gomorra. This event created such a powerful gravitational pull that it triggered Saburra's core to overload. Forcing the energy to violently project a scorching hell beam from the lower equator. 2/3 of the population was disintegrated.

Barely missing Freya and Margidda, reaching out 6 lightyears in the blink of an eye. Scattering multiple infected shards of the planet into the solar system and beyond.

The Atmosphere was replenished by the birth of the third angel: WRATH

Saburra is now in shambles, given rebirth by Wrath.

Both angels hold the remains of the planet together, but their plans for it's fate are divided.

Wrath spawns his hideous creations from beneath the shattered crust, unchaining them to crawl out from the cracks and reap mortal life. WOF retreat off world as the remaining humans split into factions to fight for their survival.

The planet was repurposed to be a galactic scrapyard, coating the surface with junk metal and space ship debris.

Setting the rusty rotting stage for my storyline to take place...