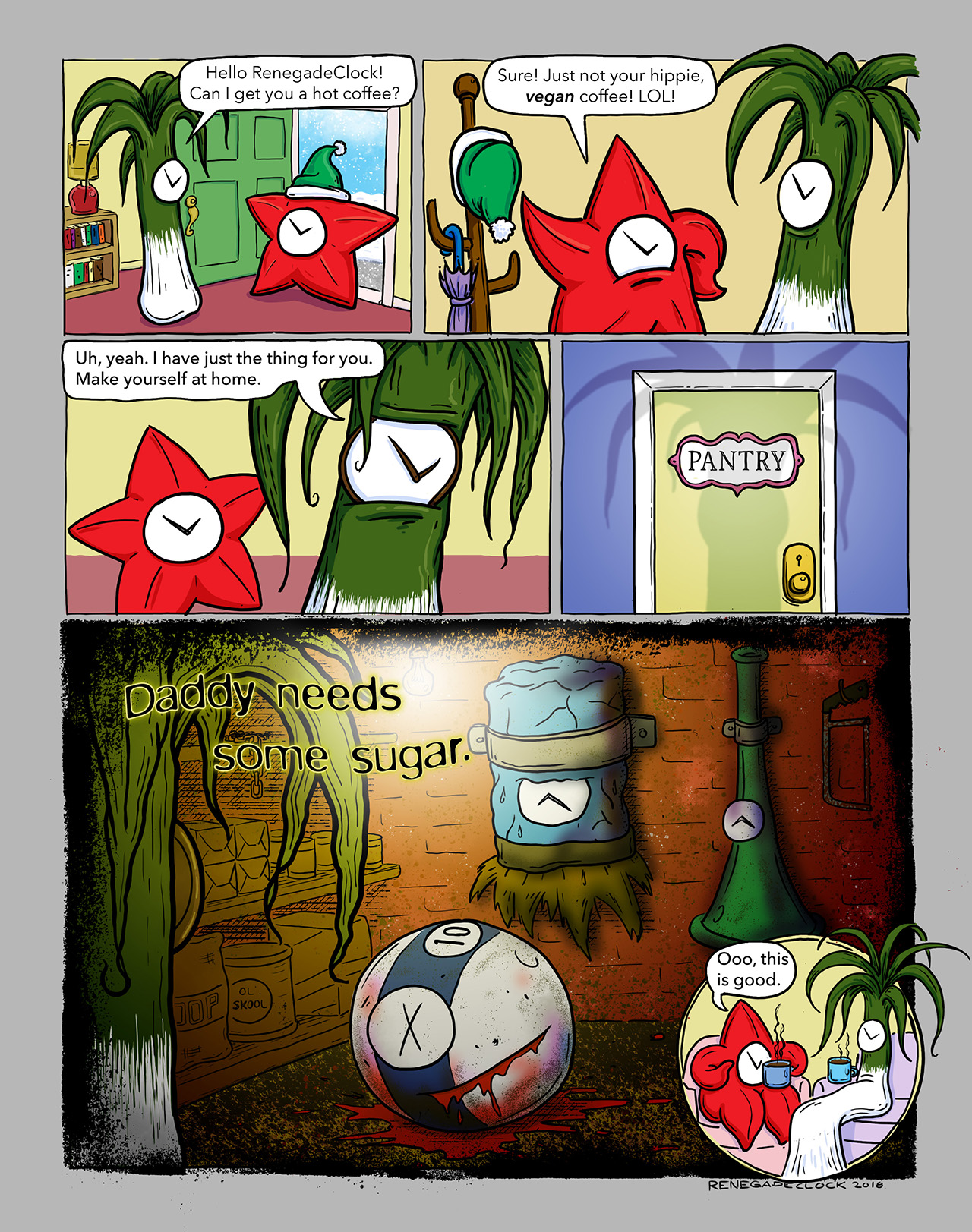 Im glad im not a fruit .

the clock's ''faces''+eye/face expressions were great, their bodies/objects were nicely drawn as well, the linework was nice, and the colours were vivid.
but what is more impressive, is/are the (many) small details in this comic.

i noticed, that, as renegade clock made fun of leek's ''hippie coffee'', leek's ''hair'' (or leaves) got darker, dirtier and more withered, if i may say that.
the same thing happened with leek's clock, which got a darker ''eye'' expression, and a more detailed, darker appearance as well. (in the clock-eye's general design).

things got even worse for leek's appearance as he approached his ''pantry''.
you've managed to portray the insanity+darkness of an evil person into a clock's appearance. impressive!

apart from this obviously nice progression between ''peaceful'' and ''absolutely evil'', i liked the design+the appearance of the other clocks as well:
the friendly, and cheerful renegade clock (who wore an adorable xmas/winter hat), the brave bb10, who is incorrectly shown as dead (since all clocks are immortal), the surprising (yet beautiful) cameo of bluestone clock (whose stone-body and hair are drawn with incredible details, great work!), and the brave vuvuzella clock, who stood silent in all this horror. (but was nicely drawn as well).

every single character in this comic was drawn perfectly in this.
you are a great artist, ren, and i love the humour in your comics.
its always an honour to appear in your comics, even if my main OC plays the role of a corpse, lol!
still: its a great comic, full of many cool details, and with a great design.
the linework, the character's expressions, each part is flawlessly drawn into perfection.

you should make more CC comics, if you want, you have mad skills!
keep up the great work!

This was a good outcome of things and glad you went ahead with this as notmany would have gone this far in depth, but very nice style. I really like the idea here of a clock crew comic I dont think I have seen one or a few before so its nice see one now and you did a great job and some very nice use of the comic frames and design of the characters, I hope you make more stuff like this it was pretty nifty. So some very good stuff here, A refreshing piece of art and design, and shows off the talent from within, and shows you really outdid yourself with this one.

~~THINGS TO IMPROVE ON~~
The frames were great but maybe that outter grey frame should be a red or green or something brighter.

wait is that me next to vuvu?