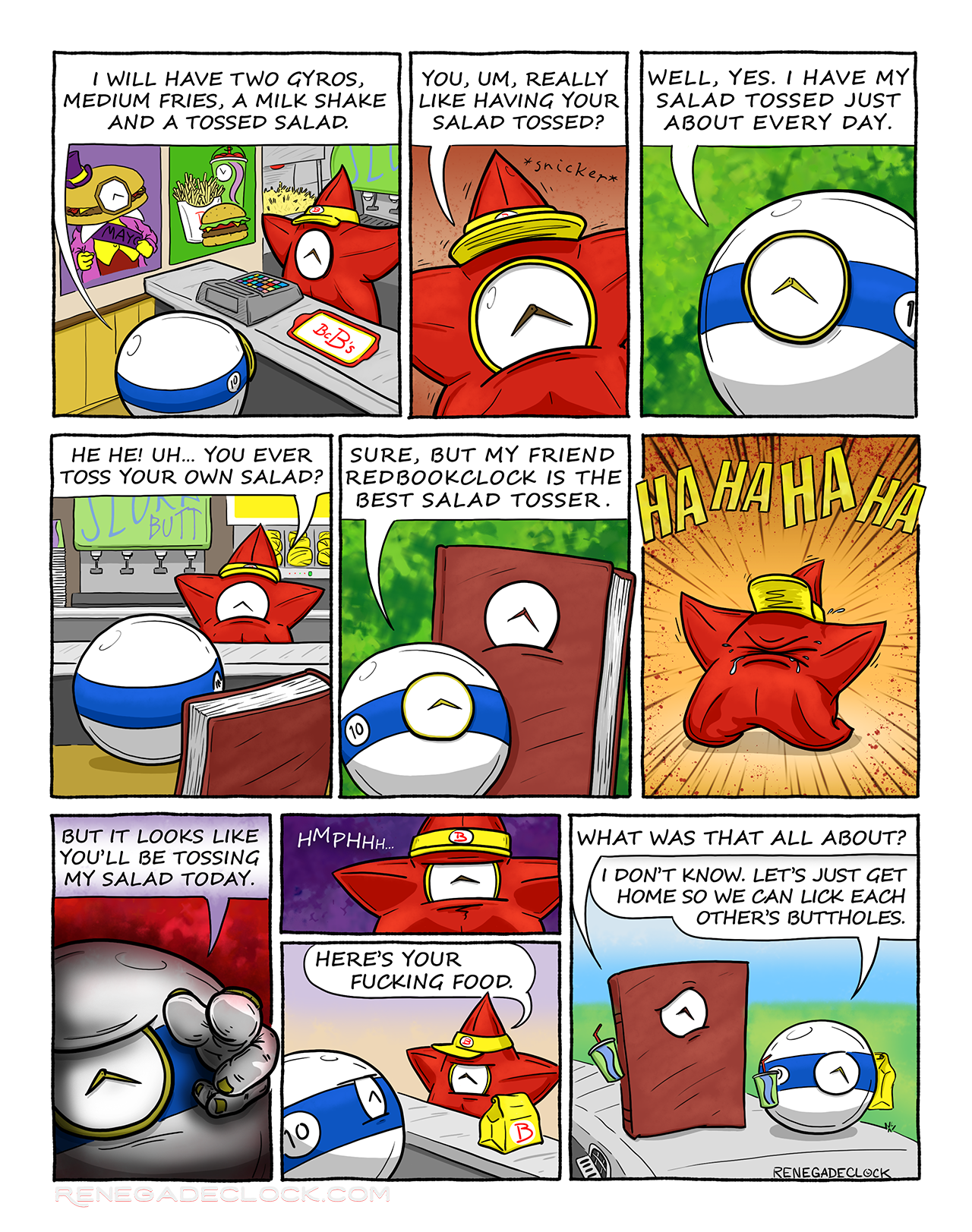 Who the hell orders salad at a fast food joint anyway?

once again, we witness a great comic by renegade clock, full of humour, great drawings and nice angles.
excellent work.

apart from the obviously well-drawn +detailed characters (BB10, renegade, redbook), the comic has many awesome details, hidden in each pannel:
notably, i liked the drawings of slurpee clock in the menu of the fast-food place, the picture of hamburger clock as a character from the fast-food, another great detail is the ''Bc B's (which can be read as 'Mc B's, alternatively) on the trays of the food-joint, the cleverly named slurpee machine with the ''slurpee-butt'' flavour, etc etc.

as for the main characters, damn, that was a finely drawn BB10, shown with excellent details, a nice clock +a BB10 ball body, and i also liked that, in each different clock-eye/face expression, his clock changed a bit, depending on his ''face'' expression.

renegade was perfectly drawn as well, and obviously, his design is far more complex because he's a 5-radius/5-''legged'' star shape and you're always drawing your cool character with a great amount of detail, but also with the great effect of ''elasticity'', which means: ''of an object that stretches+moves in unique elastic/flexible ways'', despite it being from a solid material: in short, renegade's character displays awesome flexible/elastic abilities as he moves/makes a gesture, despite the fact that its a star character made from iron.

furthermore, the ''toss the salad'' pun was unknown to me, which was a funny event that culminated to this sweet idea, and it because a kick-ass comic!
im happy that i contributed to his ''happy accident'', man!

lastly, i liked how the story went on:
BB10 talks about tossing the salad, he seems oblivious about it, ren laughs alot about it (for good reason), and eventually BB10 reveals to him that he knows, which ends the joke instantly.
but the ending... the ending was genius! comedy gold!
i loved it, great ending.

all in all, you've created a detailed, nicely drawn comic, with awesome characters, good face expressions, many hidden details in each panel, and a great amount of humour in it.
excellent work as always, keep it up!

I'm the salad tosser then