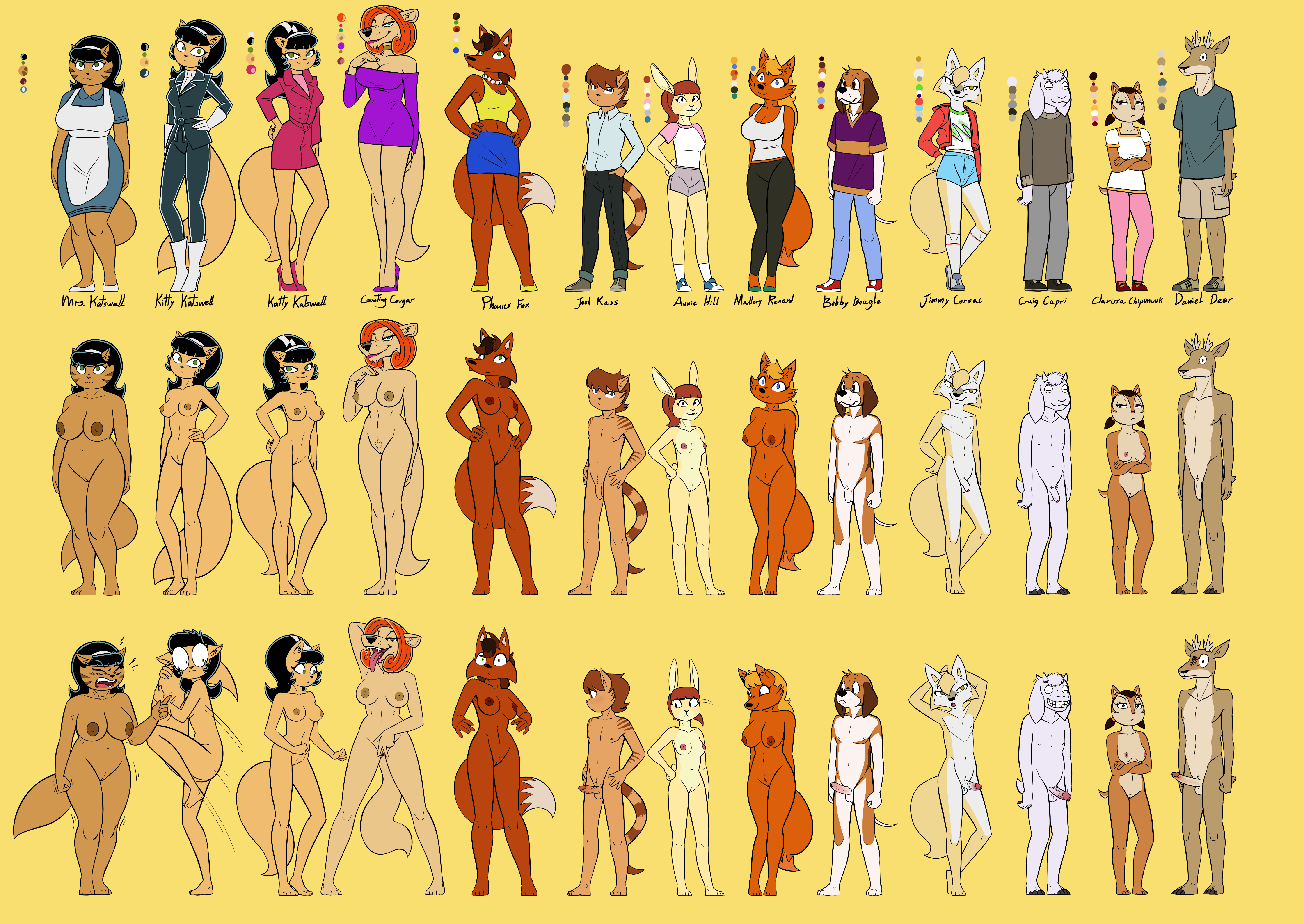 EDIT 03/11/2020: i went back and redid the breasts on the Katswells and CC as well as Annie's ponytail, they should all look nicer and also more accurate to how i actually draw them nowadays

Giffer and I created this universe for the stories and drawings you're going to see here. Not everything TUFF Puppy-related uploaded is part of it, but anything tagged lore is.

Our lore consists of two parts, first, the story of Mrs Katswells' relationship with her daughters, and with her human boyfriend (a formerly anonymous stand-in). Seeing Kitty's dead sex life, Mrs. Katswell tried to sacrifice her own relationship with her man of more fitting age to her, though when the man refused to leave her and her daughter refused to let him go either, an incestuous shared relationship began that eventually roped in Mrs. Katswell's best friend, Counting Cougar, as well her other daughter the ex-criminal Katty, out of jail and medicated enough to be functional but a sexual deviant still.

Josh is a fourteen year old cat whose parents separated when younger. He hasn't heard from his mother in years due to her moving across the country, and his father works nights, so he was often left in the care of a sitter until his father felt he was old enough to fend for himself at night, waking him up for school upon returning home from work.

He's an otherwise average teen, having interest in video games and girls, though his often lonely existence at home has made him slightly more mature then he'll let on around peers, often coming off as reserved. Regardless, he's open to physical affection around people he trusts.

Annie is a fourteen year old rabbit with seven siblings-all but one girls. Despite being loving parents, with eight children competing for attention, Annie was often left to entertain and care for herself.

She carries a gentle personality unless she or someone she cares for is mistreated, changing to an assertive and sometimes confrontational demeanor many would find unladylike. Annie is EXTREMELY affectionate around trusted peers, with a devious sexual streak in which she ropes Josh into tag-teaming their classmates, male or female.

Bobby is a fourteen year old beagle classmate and self-reported close friend of Josh. He fancies himself a masculine, girl-seeking jock, only to find himself in a relationship with his best friend (Jimmy) and later and later joining Annie and Josh in some of their schemes.

Jimmy is a fourteen year old fox boy with naturally feminine assets and a desire his best friend, Bobby Beagle, who he pines for. Jimmy's father was a jeweler who spent long hours at his store, so Jimmy often found company in his mother and sisters when home, the girls often teasing him about his "plump, girly butt" when Bobby wasn't around.

He's a fairly laid back boy with a smug attitude and a class clown, to the annoyance of some adults and the entertainment of his classmates.

Mallory is a fourteen year old fox classmate of all four of the other students, though she generally only associates with Josh and Annie. She has an incredibly shapely figure for her age, to the point few would know how old she is, sporting massive breasts and wide hips she inherited from her mother.

When she first met Josh, she was immediately stricken, and when she found Annie had approached him first, she was resolved to having Josh even if it mean having Annie too. The three eventually became fairly tight knit friends and both Josh and Annie took it upon themselves to help her assert herself to exploitative classmates as well as be her outlet, both sexual and emotional.

Craig's defining trait is that he "needs to coom," Clarissa that she's a snob but also has a sexual relationship with Craig (because he can fuck hard) and Daniel is your stereotypical deer in the headlights who goes along with things because he freezes up otherwise.