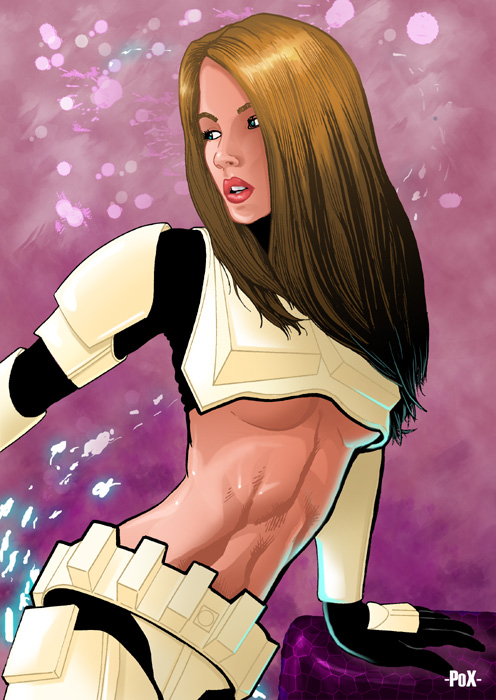 So here was a nice character piece, the expression on her face is really goodm the outfit she has on almost looks like that of a storm troopers outfit from the starwars theme, but nayways nice work here even a nice backround I kind of feel like there should be some type of fancy borders and frames on this piece. but anyways nice work here.

While not as good as some of your other pieces, this was nice to look at. I don't think I've ever seen a female stormtrooper being depicted like this. I think it has come across me at certain times. It was mostly just done as a joke in those instances. It's great to see a really sincere picture like this. There isn't much of an attempt to oversexualize it.

With more armor on, this seems to be pretty practical for this kind of uniform. The background is also very cool. I'm not sure where this is supposed to take place, probably in some Expanded Universe land. She looks a bit confused. The pink colors have good flair to them.

Brilliant image, the girl is Mega sexy and im so glad u havent ruined it with major boobage or anything.

i love star wars and girls! and to combine them is awesome!

but well i think her body is a liiittle bit slim but better than fat ... oh and dude , thank satan you draw her this hairstyle , i think people here mostly draw retarded haircuts for woman ( or even worse- they draw them ugly faces ) but this is lovely , i totally love when chicks have these haircuts. and her stomach - wow! btw i hope she will become clone trooper because that way i want one clone for me. (just kidding )