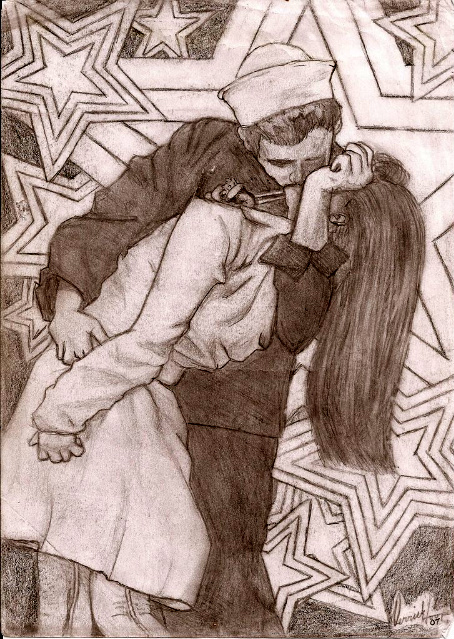 this is my sketch of that picture of that random kiss. i gave the woman longer hair and added stars in the background.

Anatomical and "FACIEL-FEATURES" are depicted proportionately, "OUTLINING-A-REALISTIC-LOOK" of the couple. Heavy shading replaces a need for color, while presenting texture to things such as hair and clothing, Detailing of the man’s face is beautifully done despite being somewhat hidden due to the position, A vertical layout of the drawing allows for their full pose to be shown, Emphasizing the romantic tone black and white color scheme also builds on the "VINTAGE" look.

~~THINGS TO IMPROVE ON~~
I do think some added color maybe some frames in color or maybe even some stars a faint color.

this piture was tooken whe a bunch of sailors came after the second world war when the marines girl came upto him. i can see you drew this wich is why i said copy draw either way im glad you are intrested in historical piture good work

The faces look a bit confusing

this is truely fantastic