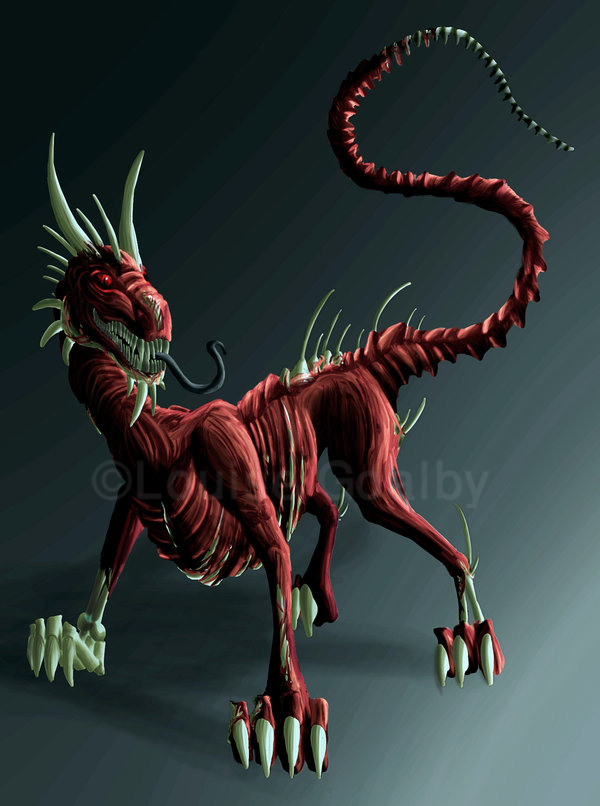 'A dragon with his bones very prominent and slightly protruding giving the appearence of a skeletal or zombie dragon? With a wicked grin and red eyes?'

I liked this pic but would have given a ten if you had a little more skin on it. Muscle and bone are creepy but the real gross factor comes from rotting skin. Other than that great job

I'm not exactly familiar with the skeletal structure of such a creature,
however, this is probably the best undead representation of one that I've ever seen. It's decaying, the bones are sticking out in some places, adding to the effect that any piece that carries the name "undead" would be expected to exhibit, while granting it so much more in the process.
As per the addition of those additional bone bits jutting out here and there, that was pure genius.
I'm not typically a fan of undead art, but I know a well done piece when I see it.

That being said, my inner critic is eying that right-front claw...
Something about that one just strikes me a certain way...
But, as mentioned before, undeads aren't my hotspot, and your artwork clearly says that you know em better than I do.

The attention to detail that you've paid around the rib cage is incredible.
The facial muscles have been carefully and meticulously created to provide and amplify the expression, and makes this piece just that much better.
The rotting flesh aspect, has been incredibly well done. Most people just leave a bald, bony patch, but you put the remains of muscle fibers along some of these patches. This is relatively unique to the better ones in the category.

I'm putting this thing on my list of things that I never wanna see jump out of the adjacent room...

Reminds me more of the monsters from parasite eve, when they transformed and their flesh pulled away from their mutate muscles and bones... still cool