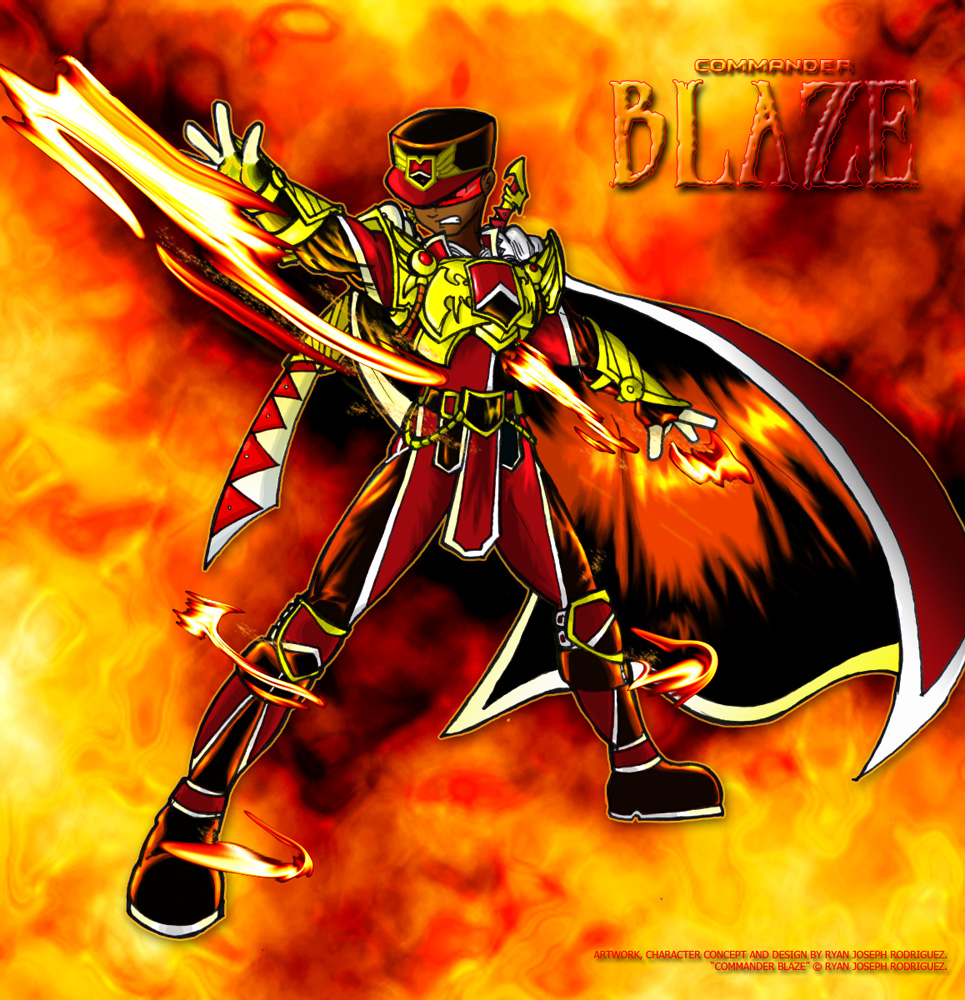 Though plagued with nagging doubts about whether or not he has the makings of a true leader, Commander Blaze is a hero through and through, fully focused on the task laid out before him, but also committed towards his friends. This commitment is not only his greatest strength, but probably also his greatest weakness, as well, as he finds it rather hard to turn away a person in need, even if said person is ready to drive a steak knife right in his back when he's not looking. It's a fact that Warlord Zanmato has acknowledged, and would be more than happy to exploit for his own benefit.

Commander Blaze is a patriot, and his costume, decorated with markings and colours symbolic of his country's heritage, is a testament to that fact. However, making the assumption that the costume is merely for show would be a fatal mistake. The costume is well insulated, and made of a fireproof material that would take an extreme burst of high temperatures to burn through. The chest armor buffers against damage towards the upper chest area.

The swords play a big part in the Commander's costume, as well as his own powers. Mounted on his back, they can fan out of its holsters and focus bursts of flame downwards, acting as a sort of 'jetpack' for flight. By pressing a concealed switch (or by willing it), the swords can 'spring' out of the holsters to be used for combat.

In the event that the cape (patterned after Trinidad's flag) becomes a hazard to Commander Blaze's safety, two emergency latches (triggered either by a sharp enough tug on his cape or two manual switches on his shoulder pads) will cause the latches to release the cape, allowing him to escape safely.

Commander Blaze is somewhat the 'straight man' to a team consisting of the fastidious (Geargirl), the purile (Crystal) and even the smartassed (guess who.) He's more or less dedicated towards his goal of a perfect world, but, at the same time, he's also dedicated towards his 'soldiers' and friends, as well, to the point where he's not going to issue an order he wouldn't do himself.

At times, however, he can simply become so engrossed in this dedication that he'd either go overboard in 'being a hero' or so self-absorbed when he feels that he's let his team down. Either way, he secretly feels that, like his allies, he's just a young man looking for his own niche in the world, and, as such, questions if he's the right guy for the job. Not that he'd ever let his team-mates know that.
After all, who'd follow a man who second guesses himself like that? So, instead, he puts on the front of a brave, competent leader, in the hopes that one day, he'd stop questioning himself and actually go out there with enough gusto to move the WORLD.

He's also pretty proud of his culture (and sometimes laments that his fellow Acolytes, save for people like Crystal and Rampage,) don't appreciate it more. He can sometimes be seen playing various musical instruments in his office, most notably his saxophone and a vintage steel drum given to him as a gift from one of his country's most prominent steelbands.

...he also laments that some team-mates simply don't like following orders. Needless to say, he knocks heads with New Era Outlaw quite a lot, with the latter's rashness clashing his his own rationale. More often than note, this has him reaching for the gallon-sized Aspirin bottle he has stashed in the medicine cabinet (you know. The one he put away just for days when NEO happens to be under his command. Which is like all the time.)

The only reason this picture is not on front page is because he is black..

Thanks. I'm in the process of simplifying these character designs, because DAMN, this is a pain in the ass to draw consistently.

But yeah, gracias for the visit. =)