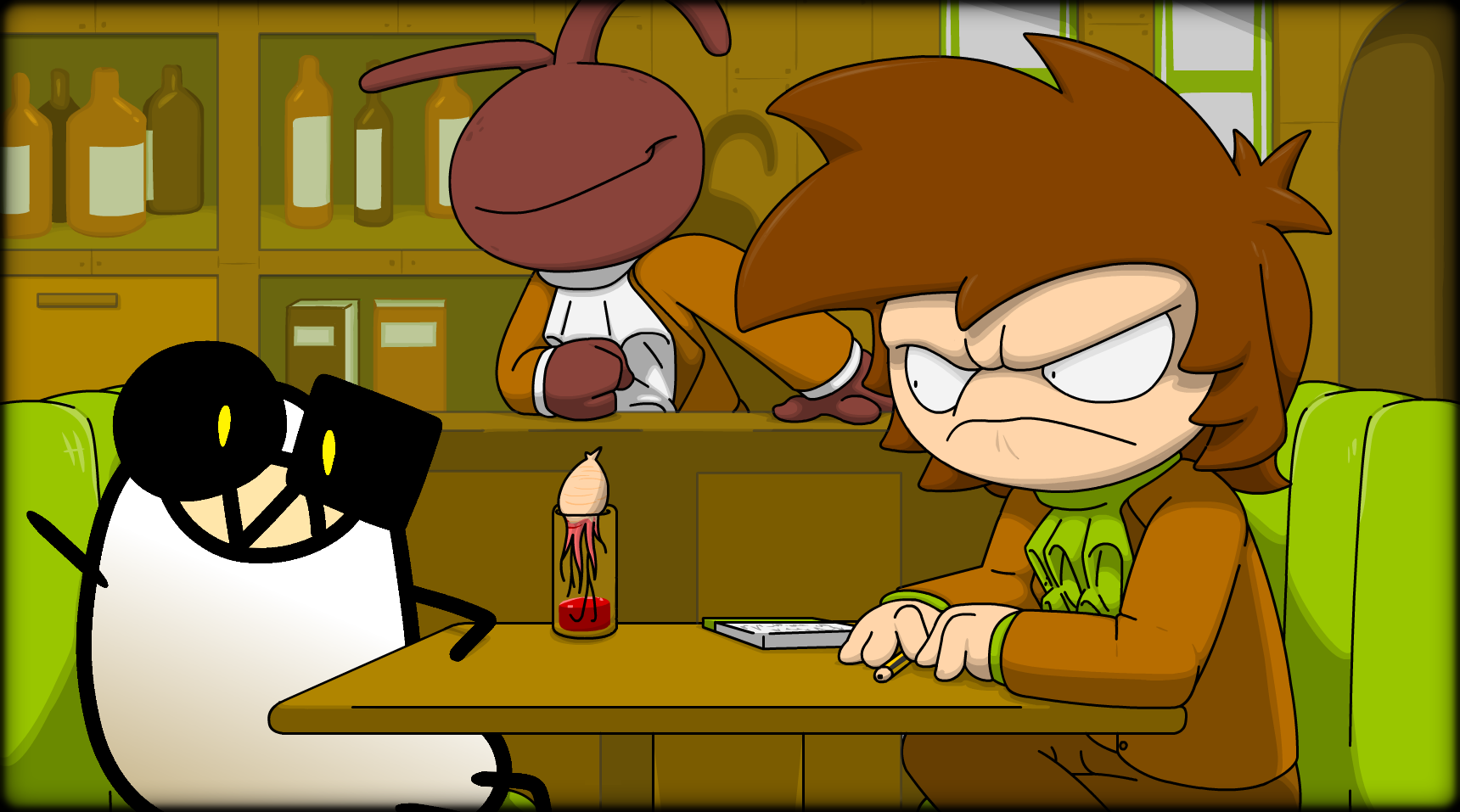 The road to a Delirious Ascent

What is following is an interview with Wendoe, the friend (?) of @Wendigo. He managed to

entertain me for about an hour saying stupid things and telling me interesting trivia about his artist self.

I like him. He is a little crazy bastard who has no boundaries of saying things, just like me.

Not gonna lie, I was looking forward to this, "meeting" of ours.

Wendoe: Who isn't? You wanted to do this interview for a collab or whatchumacallit and I wanted this as an excuse to ditch my chores for the day. Say, is that ginger ale comin'...?

D-ray: I made both the ginger ale and the ginseng.

D-ray: Just kidding. The supplies of stuff we sell are 20% off because of... well, stuff, so I ain't gonna make you pay.

Apart from my random gibberish, let's "break the ice". Are you an artist, right?

Wendoe: Well, Wendigo is. He's spiritually connected to me, so, technically I am sort of an artist too.

D-ray: Ah yes, I understand. I have a similar bond with my wife. Except she is not an artist, but a brioche.

Well, tell me a little about you, or Wendigo. I'm damn curious to know.

Wendoe: It's in the bio. Portuguese artist, polysexual, likes bologna. That's pretty much his personality. Plus, the fact he's one moody motherf****r. And I'm Wendoe, his anima. You're Italian, you probably know what that means.

D-ray: The fact that he is Portuguese is something I don't really care. My Italian culture is way beyond his boundaries, so I'm obliviously best.

I don't really know what the hell "polysexual" means tho. Is that like an ideal? Or... ?

Wendoe: BWAHAH, AN IDEAL?! It's- it's queer stuff. He likes guys and girls and things that look like guys and girls... even girls with guy parts but hey, I'm not here to doxx the guy.

Well internet says I suffer from "lipophilia" but I'm not really sure what does it mean. I usually take it as a compliment.

D-ray: Oh good it's just random internet bulls**t, I thought it was some kind of illness.

Wendoe: The Internet is an ilness, Ray.

D-ray: I prefer referring it as "anarchy", but I think it's the same.

Anyway, you know something about Wendigo's past? Like his history in the making of art? Like, when did he start, what made him draw, stupid standard stuff like that so I can go over to the real questions.

Wendoe: He used to be a really undeveloped kid when he was kid-aged. And I mean REALLY undeveloped. STUPID, RETARDED, all sorts of names you can think. The type of stupidity that... makes doctors cry. Luckily, his mom, not to be mistaken with MY mom, Bloody Mary, bought him tons of art supplies and he immediately fell in love with drawing. He watched cartoons, drew them, shared his drawings with his friends, even gained friends by drawing...

D-ray: I wonder what is like to have Bloody Mary as you mom...

Baaah I mean, that's pretty heartwarming. Even for me.

All youngsters are very undeveloped, even the celebrity that it's me was back then.

I don't have a really good, relationship, with my mamma, but I remember her being awesome back then.

Wendoe: My mom brings me food once in a while, she's not that bad. Wendigo says that our mothers have 'many things in common', for example, murderous appetite for men and a disgusting 'ego'. I wonder what makes him think that.

D-ray: Experience probably. After what you said, I think that my inept, hypocrite and naive mother isn't that bad after all...

From the way you told his story, it seems like an important step of his "life career".

Wendoe: To him, art is... Well, it's just something he does! It's like having a pet. You gotta feed it, take care of it, have fun with it...

Posting on Newgrounds feels like a much bigger necessity to him, since he's taking care of... holdup...

Yeah- 54 fans plus himself. Imagine having fifty five cats.

Wendoe: Gee, not in that way. Wen certainly wouldn't call his

...animals. Art is meant to entertain. When he draws for himself, he's having fun with his art and himself. When he draws for Newgrounds, he's trying to entertain himself and everyone else looking at what he does. And he has to take care of himself and his followers through art too. Again, it's like owning a pet dog... The more people following him the bigger the dog gets, the more care he's gotta give it.

So basically art is just a mean to entertain himself and, eventually, the others?

Pretty straightforward, not gonna lie. But I can't complain, it's always something different than "nieh I have to pay my bills."

Wendoe: Oh, he doesn't make any money out of his art. As a matter of fact, he believes he never will!

D-ray: Choice or because he thinks he'll never gain money out of it anyway?

Wendoe: He thinks his art isn't worth any money. I think his pieces are pretty decent but he doesn't agree with me.

D-ray: Well, art is always worth of money, no matter the artist. Deviantart knows best.

Buuut if he thought his art WAS worth, you think he would sell it?

Wendoe: His standarts are really tight, maybe he'd only sell his favorite pieces... after evaluating them through a series of scales and test- it's funny how such a slacker can be so determined sometimes!

And if he didn't have any fan at all, do you think he would still draw?

Wendoe: Totally. Just like he did before joining Newgrounds.

By the way, you're italian, you take pride in your country, you keep saying 'comrade'... should I be worried?

D-ray: Are you calling me fascist, plebeian?

D-ray: I have very little pride of my country. I do have pride in my country's history, but I'm not nationalist.

And I don't say comrade that many times comrade.

Wendoe: Anyways let's talk about girls! Got anyone in mind right now or you's a single man?

D-ray: What?! This interview is supposed to be about art.

Don't think that I'm a misogynist, not that I would care, but girls aren't art.

D-ray: What the?! I uh... well, I finished the questions about your friend anyway...

Wendoe: ... Geez, you're boring. Nevermind, man, you can go back to interviewing me now...

D-ray: I'm boring?! Do you even know you have a warmong- I mean, a "military commander" in front of you?!

I uh, fought, in the "Last Call" conflict on D'Hoonnib two three years ago. I "commanded" the whole operation.

So yeah, have some respect, youngster plebeian.

Wendoe: I killed Delirium in one shot once.

D-ray: That's not skill based.

Speaking of skill, wanna know what skills Wendigo actually has regarding art?

I think he is skilled in... fan-arts?

Wendoe: He mostly does that, yes, but when it comes to drawing, he acts like a greedy algorithm, discarding what looks 'bad' and only keeping what looks 'good'. Again, weird standarts.

D-ray: That's cruel for his art comrade. If you got nothing bad to learn from, that you made, what the hell will you learn?

Wendoe: Exactly. I sometimes tell him to stop fixing this tiny little gap between strokes for hours only to get a 'What do you think I am, some slacker?' as a response. He says he's got a fear of failing or leaving mistakes.

D-ray: He might get over it someday. At least, I did. And, in fact, I'm a great artist.

Wendoe: You really are, I dig your work.

D-ray: I usually hate people who state the obvious, but you are too funny.

D-ray: So, we might wrap things up by now. To end this "interview", if I can still call it that way, I want to ask one last question:

Wendoe: Well, having a demonoid mother really teaches you a thing or two about the occult. Furfur- a Great Earl of Hell- has quite an affinity for animals.

*shows a picture of a chihuahua with glowing eyes*

As soon as I gave him the half-eaten remains of my dog, he shed a single tear that landed on his head. It didn't take long for it to return... Well, the thing surely changed a bit but eh... 'Til death does us part I guess...

It's ADORABLE! And fine!

I discovered what the hell you are; I discovered alot about Wendigo; and the doggo is fine!

If you ain't got anything else to address, and you finished your

drink, you can go free I guess.

Ooh, I need to go now. Scatole did a horrible job with this drink and my stomach knows why...

D-ray: Yeah, sure, I'll let him know that the plebeian who ordered two different drinks put together felt sick.

You know, this was rather charming!
And, as one myself… Suppose it is funny in itself, when a slacker gets determined. One second they’re tired as hell, the other they’re working on an entire series.

I hate Wendoe so much.

You shouldn't have sent him to the interview comrade.