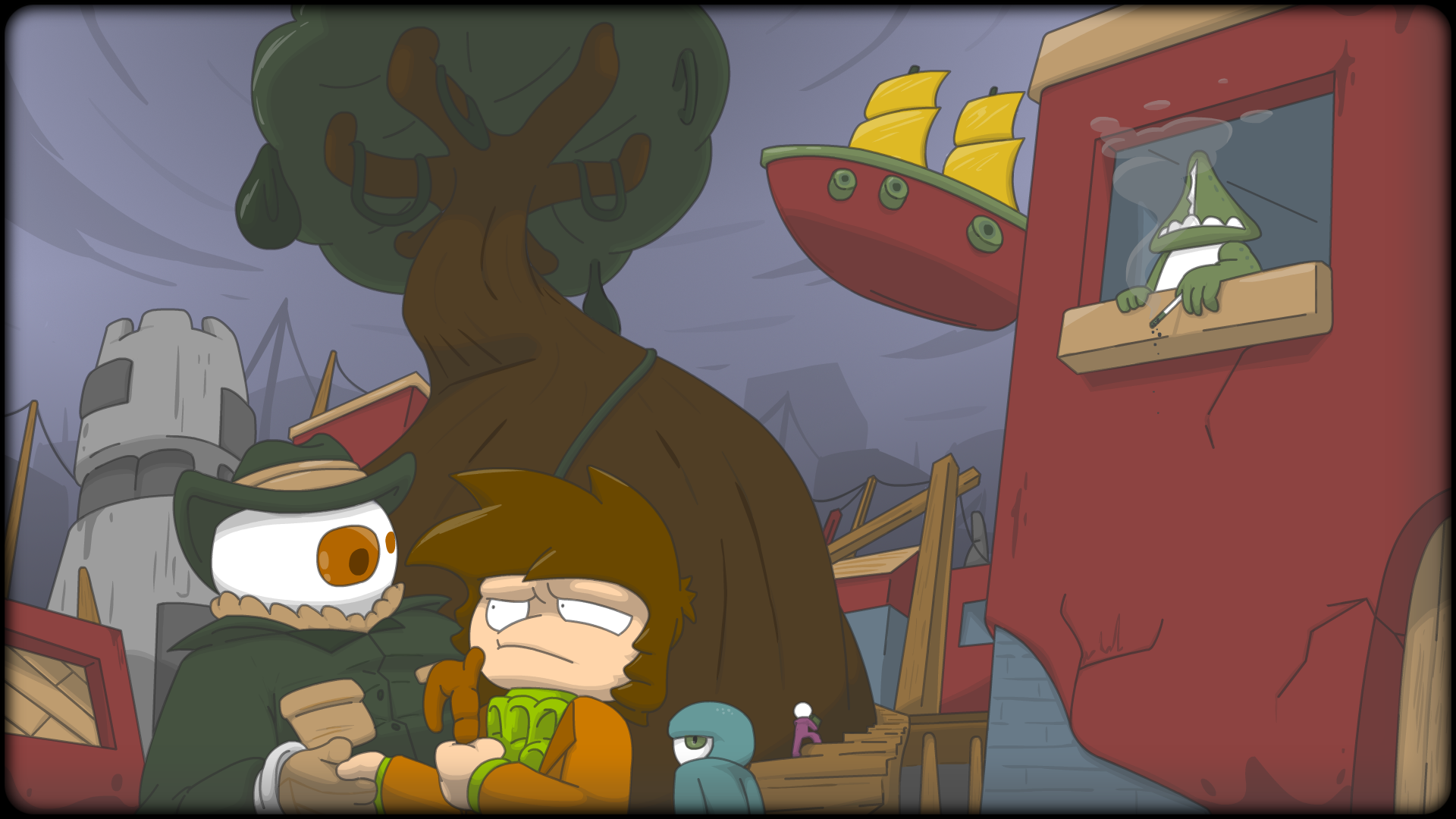 A warp opens up letting out a biped creature that, confused, examines the surroundings

???: Hmm… I assure you I am not the specimen you are looking for, good sir.

???: I am merely a traveller of these lands. To what chef you are referring to, I can only guess he made it possible for you to teleport you to this plane of existence?

D-ray: Yeah look, I have no idea. There was this spaghetti monster thing that opened a warp or something, and then I found myself here. Since you are not him, or Scatole, I assumed you were that guy’s friend, waiting for me.

???: And Scatole, I could only assume is your employer, was doing business with this so-called spaghetti abomination?

D-ray: We work together in a diner on d’Hoonnib. And yes, kind of.

I needed a “vacation” to clear my mind out of, well... stuff, and he suggested me an “out of the world experience”. Then he brought me to this chef thing abomination claiming that sometimes he gives him “special ingredients” for the stuff he prepares.

???: Hmm… There is only one podian that I know of that does both catering and has the technology to do it mutiversially. This monster you are talking about is an ambitious cook that recedes in the corridors of Mach Manor, faction of the High Pupils. No wonder your friend wanted you to take a vacation there. It’s like a big hotel with all the bells and whistles. I can get you there if you need some guidance.

D-ray: But, hold on, that means we are not there?

???: The transportation was probably compromised by an outage.

Vagapod: Well I wouldn’t say you’re in hell. You’re in the right universe, but not the right luxuries. You, my friend, are in a place whom their inhabitants lurk in the roots of the multiverse. It is often called many names by immortal angelics and darkened souls, but we call it The Eyepod Nation. From my face, I think you can guess why. My name is Vagapod.

D-ray: Well thanks for clarifying that I’m not in the Bronx. By the way, I am known by many names as well because of my... celebrity status, in my universe at least, but you can just call me D-ray.

Vagapod: Nice to meet you D-ray.

Vagapod: I’m not much of a celebrity myself, but hey, folks are familiarized with me.

D-ray: Yeah, about that “Manor” you were speaking of like five minutes ago: I’d like some guidance, I’m not really fond of this place.

Not that I’m scared of course, but after seeing the spaghetti monster, I’m not expecting something better looking either.

Vagapod: Why of course, I love travelling that’s why I do it all the time! The Eyepod Nation feels like a realm of monsters to outsiders. I surely hope I will be able to assist you in your journey back to your universe. Who knows what could’ve caused that outage.

D-ray: I don’t have any other choice, so I hope the same thing. But this does not mean I’m going to trust you right away.

This staff ain’t just for walking, so don’t think of doing anything suspicious comrade!

The two progress downwards the street walks that curve around a mysterious tree, inhabits walking about have a giant eyeball or eyeballs. The sense of this being D-ray’s own universe starts to fade.

Vagapod: As the saying goes: do not mess with the arms of a staff wielder, not to imply that I mess around too much. The only mess I’m known for nowadays is my taste of humble-made stash heh heh. Say, are your eyeballs feeling alright?

D-ray: They feel weird. But it's probably my “dry eye” syndrome kicking in…

Vagapod: Well do speak up if they start to come alive. A part of your soul might try to seep into them to achieve sentience. It’s sort of like a… eyeball magnetization that only happens here. Especially in the Dweller Faction.

Say, mind telling me what is this place? You mentioned a faction here, are you sure they are not going to kill me or something?

Vagapod: The Dweller Faction is the oldest and most analogue of all of the factions, most definitely due to the majority of its inhabitants being born from the root of life.

It is seen the colossal root in the center of the community erupts of darkness and of great improbability. From the looks of it, D-ray only recognizes it as a tree but with a stringy and slimy substance as its leaves. Houses, shops, and other public sanctuaries surround the great faction of people, some or some not under wooden supports from the root of life

Vagapod: The inhabitants here always develop on themselves since podian DNA is dependent on the very being’s will to become a specific organism in the Eyepod Nation. Some become skilled mercenaries and move to the Realm Walker Faction, which falls under what humans consider to be a “constitutional monarchy”. Some approach a more simpler life and still reside here as supports to the community.

A being from outside their window smokes a cigarette in preparation for a day as a pot holder. Some undeveloped eyepodians require water for moisture

Vagapod: Some even go as far as expanding the mind of their being where they would enlist more development in The Deceptive Faction. As for someone in dire need to kill you I am unsure. Only thing I could muster up is if the local butcher ran out of human meat but even so... You don’t smell human...

D-ray: Interesting… Taking a shower once a week might have helped me out of certain death. Suck on that Scatole and your stupid hygiene schedule.

Vagapod: If there are other questions you wish to to be enlightened on this journey, do not hesitate to ask. It is only on occasion I travel with somebody. I often travel alone with my wears, so there isn’t much to think about.

D-ray: I would ask what you look like under that jacket, but I’m afraid of how you are going to answer me. So, let’s just move on… “Vagapod”...

Additional dialogue and overall design in collaboration with @EyepodNation.