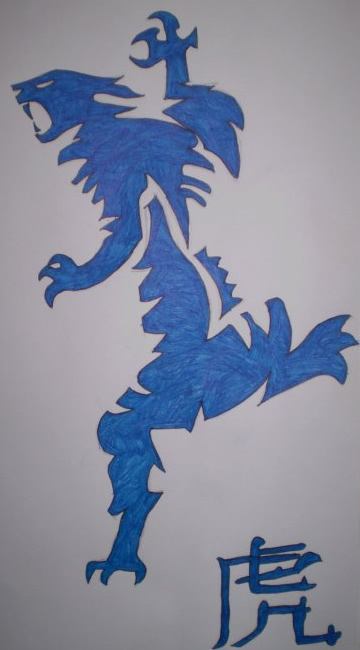 A tribal tiger made with pencils and more

(Basically insert copy and past of my last review here, but don't actually do that because it wouldn't be a good thing to do in the review section)

Again, could use some contrast like your last piece. Maybe a red dragon attacking the the tiger? In all seriousness something red in the background instead of just the white could really make this stick out and look better.

Almost same copy and paste of the last review hahaha. Same thing, just copied it on paper and give it a shot. I guess that by that time I still believed I could get better at drawing haha

This can make the awesome tattoo!

pretty good.I love the japenese and this was made perfectly!

~~REVIEW~~
and now for the Japanese Tiger, The "BLUE" really looks good here, i wouldnt touch it much if you did bring it out into other art programs to spice it up, the "TEXTURE" really shows up on this one, now i must say this tiger is my favourite of all your work, mainly because the texture does show up more then the red dragon, but i do feel like the red dragon that it could use some effects such as the red dragon again some glowing effects maybe it be the "EYES" or maybe in this case it could be the "TEETH" and eyes, but you get the idea, and i do believe it would improve on thse works, another reason i do say this is because all these Japanese styles all seem the same and only differant is the "SHAPE" so it tends to be repetitive and not much changes except the shape, so you have to give something extra to each one so it doesnt seem the same everytime, an idea like i said on the dragon would be to ad some backrounds, maybe you ad a backround for each one that represent the animal more, and in that sense it would not seem the same everytime you make a new one, because the backround would be differant aswell. anyways good luck on your next entry i did like this one most of all the ones you have.

~~THINGS TO IMPROVE ON~~
Backrounds and other effects could be used so these are not all the same style, each one needs more uniqueness then the other.

oks thanks for the review :D (I made the same mistakes in each draw lol)