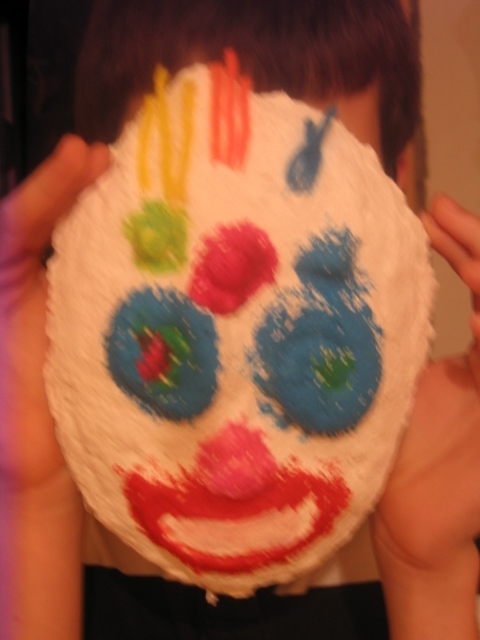 It is a papermache mask i made. please dont be to hard on it. I spent a LONG time making it.

Your idea of art is disturbing- to say the least, but at least you try and eventually you will get better. Whats the worse part is you are another 13yr old t00l on this website. It should be renamed to "Chuck-E-Cheeze" Or "Kidz Connection". This site is infested with children that can not disperse anything but their version of adult humor which is only copying others jokes and phrases about dicks and farts and other tasteless and droll humor. Frankly, I think someone should screen for this shit. But I digress, you my friend aren't as bad as the other children on this website so don't assume I speak of you- but don't think you aren't elidgeable. Keep workin at it, keep is tasteful and original and you'll go far. Don't and well.... you'll end up like the rest of the t00liez around here. Anyway PEACE>

p.s. At the lvl of skill- the mask is pretty kool.

i did this in kindergarten. most people who say nice things just feel sorry about how childish this is.

it almost looks like one of those clowns in my nightmares... XD

anyway that mask looks pretty cool, but the camera shot... not so much. i better move on before my nightmares get me again lol

Thanks! I am afraid that camering is not a skill of the person who took the pitchure. And yes it is supposed to be scary.

looks like a paper plate with icing and playdoh super glued on it.