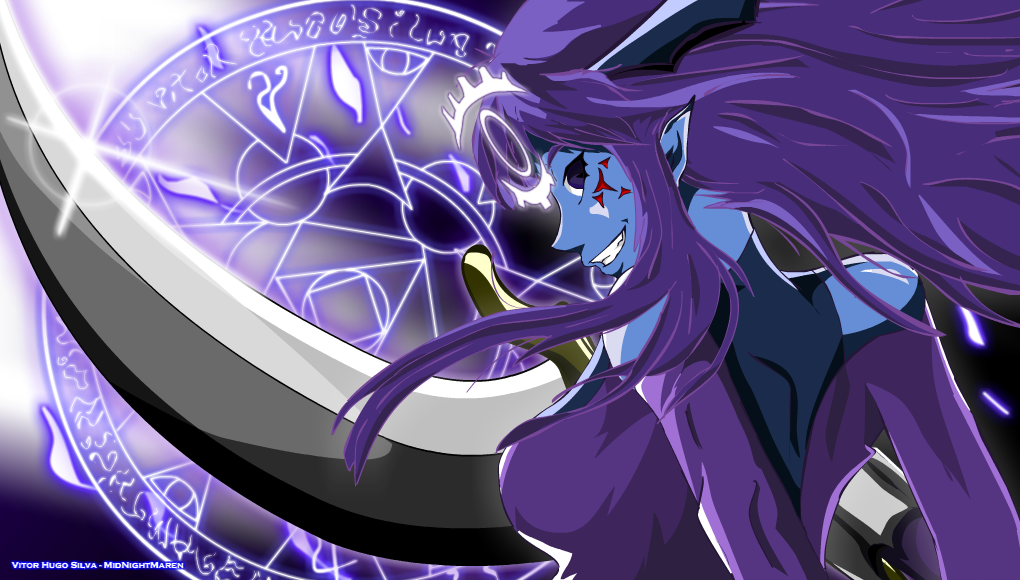 want to duel with me
i have very strong deck!

Lovely smile she has.

I actually had to look-up who 'Fortune Lady' was and which Yu-Gi-Oh series she was from, as I had never heard of her before. And after looking it up, all I have to say is....DAMN! This is one powerful card! The fact that there is more than one 'Fortune Lady' and each of them are, more-or-less, equally powerful is even more shocking! And you use to have these cards!? Whoa...! Impressive, Maren! I'd certainly be worried dueling you! I can only imagine how powerful your entire deck is if had/have cards like THESE in it!

Also, seeing as there are multiple versions (Each, I'm assuming, representing a certain element) of 'Fortune Lady', why did you decide/choose to draw 'Fortune Lady Dark' instead of any of the others? Is she your favorite one of the group or do you think she just looks the coolest?

Anyway, on to the pic itself; I think it's really good. There are a few things about it I dislike though. Like her weapon. While the weapon itself looks cool, we don't get to fully see it (Thus, making it look more like a sword than a scythe), and it also sort of looks out of place due to the fact it doesn't look like she's even holding it. Her face could look just a tad more feminine in my opinion. Though, I'll admit that both her face and hair look better here than her card's art. I don't even know if she was in the Anime (Was she?) so I can't use that for a comparison. Also, isn't she pale-skinned? She looked that way from the card, among other images I saw of her, when I looked her up. And lastly; parts of her body look somewhat..."edgy" I could would be the best way to describe it.

Despite these aspects I disliked/had a problem with, I still think you did a good job. World's better than anything I could do. Though seeing as how I had to look-up who she is, I can't give a fully accurate comparison to this drawing of her to the card's art, or -if she was in it- the Anime's art. But as simply a character drawing itself, I can give you my honest thoughts on that. And while I personally don't consider it your best work, I also don't consider it your worst either. Keep up the work MidNightMaren, and I'm looking forward to future pieces! ;D

P.S. Umm, If you don't mind, I have a request. Since this is a character from the Yu-Gi-Oh franchise, I was wondering... Do you think you could draw the 'Dark Magician Girl' from the original Yu-Gi-Oh series? She was always my favorite female monster from the Anime/Card Game. She's just so adorable, cute, awesome, beautiful and sexy! Honestly, I could go on-and-on about the 'Dark Magician Girl', haha. X3 Anyway, think you could draw her? :D

Yes, I used to have a deck of Fortune Lady's. Actually it's still somewhere in the possession of a friend of mine. About it, the deck it's pretty nice. You have some backbone power and they combo pretty well with each other. However, they rely heavily on special summon power, and only F.L.Light works properly for that. Also if the swarming of your field starts too late, you have great difficulty to win a match. It's a deck extremely fun to play and the fact that you have a Fortune lady for each element, in addition to the awesome artwork, makes it cool. But is a hard deck to play with.

I choose Dark because is without a doubt my favorite card in all aspects, and the "more useful" in the duel. I always summon Dark when I want a +4 starts on the field. However usefulness is relative in Yugi, and each effect on the F.L. cards are really powerful, however, aside from the effect, Dark handles itself pretty well with the 2000Atk beatstick right from the start, gaining 400 each turn. Also, they do appear on the Anime if I'm correct, though I don't keep track of it.
The skin tune is indeed lighter in the official art, as well as the weapon, but I wanted to give it an original feel.

I might make a pic of your request, though I don't really have the time. It's not impossible, but rather unlikely that I do. Also it's not really a character I'm personally bound to :P