For the month of March we have disabled ads on all E-M content. We need 79 people to reach our goal of 3,000 active supporters. If we hit that, we'll continue with a new goal in April! 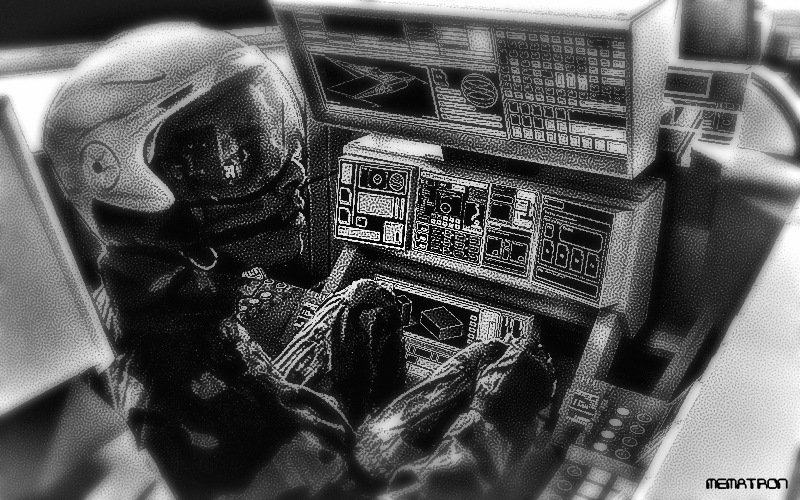 Behold, the internal cockpit of the Solar Striker micro-gravity space plane. That helmet worn by this pilot is a thought control interface that eliminates the need for various elements of a classic aircraft flight control system such as a joystick.

I like the effect you have going on, it makes it stand out from other, similar work.
Plus i don't think you can argue about the physics and practicality of something that's made up, it makes sense if you want it to make sense. Nice work.

It makes sense because of aerospace engineering. Thank you for your support.

It certainly looks reality based, like an alternate reality, late 20th century version of Top Gun :) Congrats on the Front Page, you earned it! That being said, 2 quibbles: the gauss/filter effect is hiding your talent/details, it reminds me of old gif compression, but it's a bit much, at least, for a whole piece.

Secondly, the displays in front of the pilot seem like they'd obscure his line of sight, a very crucial part of flying a war machine... unless his visor transmits unobstructed visuals? There's a commercial airplane modder who's installing sheets of OLED across the interior cabin; when turned on, cameras along the hull transmit the picture to the inside of the cabin, so it's looks as though you're flying! Stephen King described the tech in one of his characters: Blaine the Train.... anyway the control panels look primitive compared to the rest of the tech and styling.

It's my lost and found technique I picked up from watercolor painting.

It's not a war space plane; Line of site can be deceiving in space especially when this craft is surrounded by overlapping waveguides. The 3D display modules are appropriate for it's operational needs. This is based on real science not a collection of parts placed just to look cool. For what this does It must look this way.

Also this is the co-pilot position of the plane. You can even see the main pilot seat ahead of his position. Look at my other illustrations http://www.newgrounds.com/art/view/mematron/solar-striker-cut-away related to this piece to see that i'm not jerking your preverbal chain.