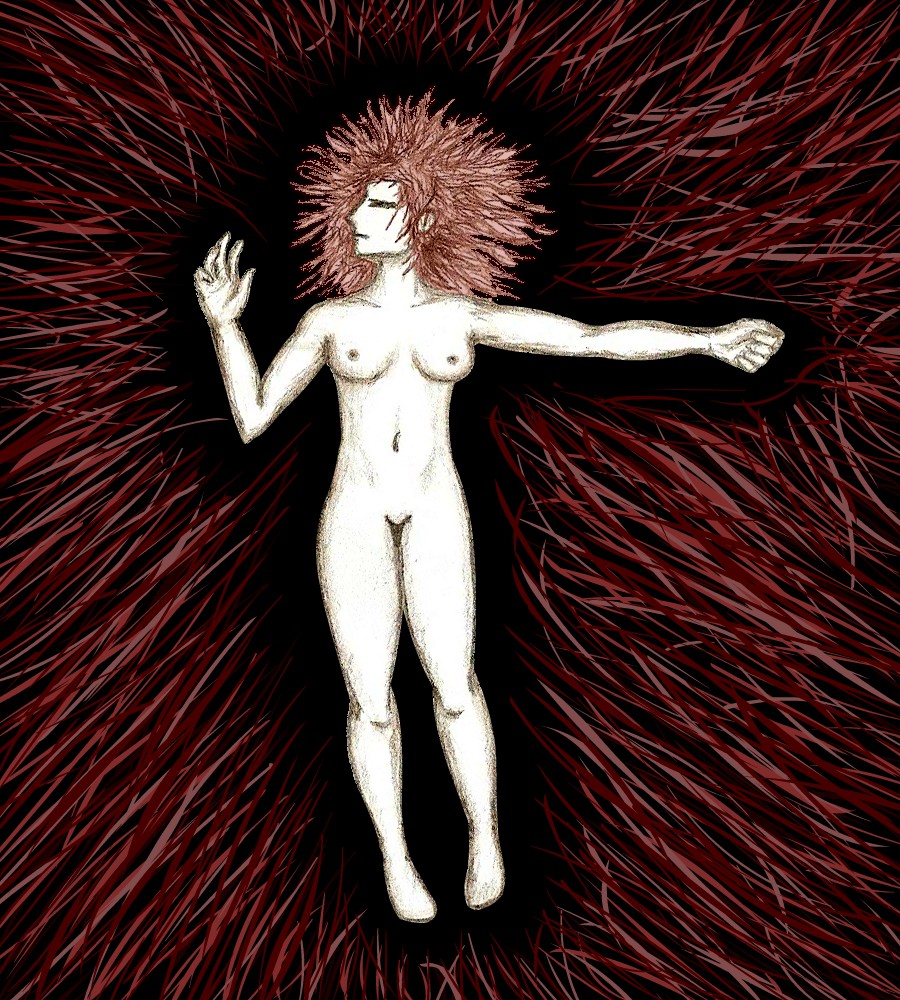 Because I love 'em.
I don't use to draw realistic human bodies, so I think this came out pretty decent.
I drew this in a paper leaf where I already had another doodles, that's why I cut it and added the background with flash.

i like it but the woman looks kind of like a midget and kind of looks like shes wearing really long almost transparent socks because it also looks like she doesent have any toes just feet. and you could have been more snooth on the elbows and arms

I can watch this all day

A good drawing. I think the propotions of the body and the extremities. The arms may be a bit too long, but it's hardly noticeable.

Maybe you could've made a different background. The current background creates a very dark and unfriendly atmosphere and it also makes the woman look like a corpse. I don't think that was your intention.

Maybe some leaves or grass would look better and more friendly here.

Hmm, maybe the arms are a bit too long, just a little bit.
And I think she may look like a corpse because she is colourless.
THAANKK YOOOU!!!!!!!!!!

I'm not saying I dislike the piece in the summary, but I have to say that it doesn't feel right in a few ways:

1) The jaw line looks quite prominent and angular. Combined with the way you've drawn the eyebrow / eye socket, there is the perception of some sort of set, almost angry or aggressive face.

2) The arms and torso seem a little out of proportion. I'd personally have said that the shoulders were too broad and the breasts were too high, almost like slightly swollen pectoral muscles. With the way that the arms look very toned, there might even be a few people calling them ripped, which takes the feminine quality away, again.

I loved the hairstyle, it reminds me of the 1980s and the background blends in nicely with this, framing the object, as opposed to the canvas itself, which is a neat quirk.

Perhaps when you drew attention to the groin, you could have used the soft pencil tones that you used where the thighs touch one another. You would only have needed a darker shade had your picture had pubes. The lack of detail here is good, because you're not focusing on the sexual nature, more on the beauty of the form.

Yeah, but I think what makes her looks a bit masculine are the arms, I really don't think the same about the angry face (since it doesn't really looks angry to me), but I respect your opinion. Also, maybe the arms look that way because I took my own arms as a reference, damn.

About her hair, it looks very frizzy because it's like if she were lying down somewhere, and her hair it's just splattered on the floor (I'm not sure if "splattred" is the correct word).

THANKS A LOT MAN!!!
(My english is not perfect, so, sorry if I missunderstood something)

I have no idea why you drew this but it is great.

-Drawings-
Good Like in the middle of the drawings its clear but the outlines are fuzzy.I like how the background is the grass and it surrounds her.That gives off a weird quit mood.The hair I don't like but I like the way it is drawn very detailed very artistic.The bellybutton is a little to high up though.And the feet have no toes it just looks like on big foot.Well the boobs go a little far out but nothing wrong with that.

-Body-
Well I'm just going to dock you on each body part.Feet there are no toes,body nicely drawn it has a good hour glass figure,boobs a little out,hands look very real,belly button to far up,vagina you can't really tell but it is still noticeable,face real nice lots of emotion,hair real frizzy and cool.

Do you know where this is going.In to my favs great job

Actually, I know why I drew this, but it's just a long story.
I'm very surprised because I never noticed that the belly button was very high, really, I never did.
I think the background can be anything you want. For me, it looks more like if she were inside of a brain or something.

Anyway, it's really awesome that this is in your favorites now...
THAANKSS A LOTTT!!!