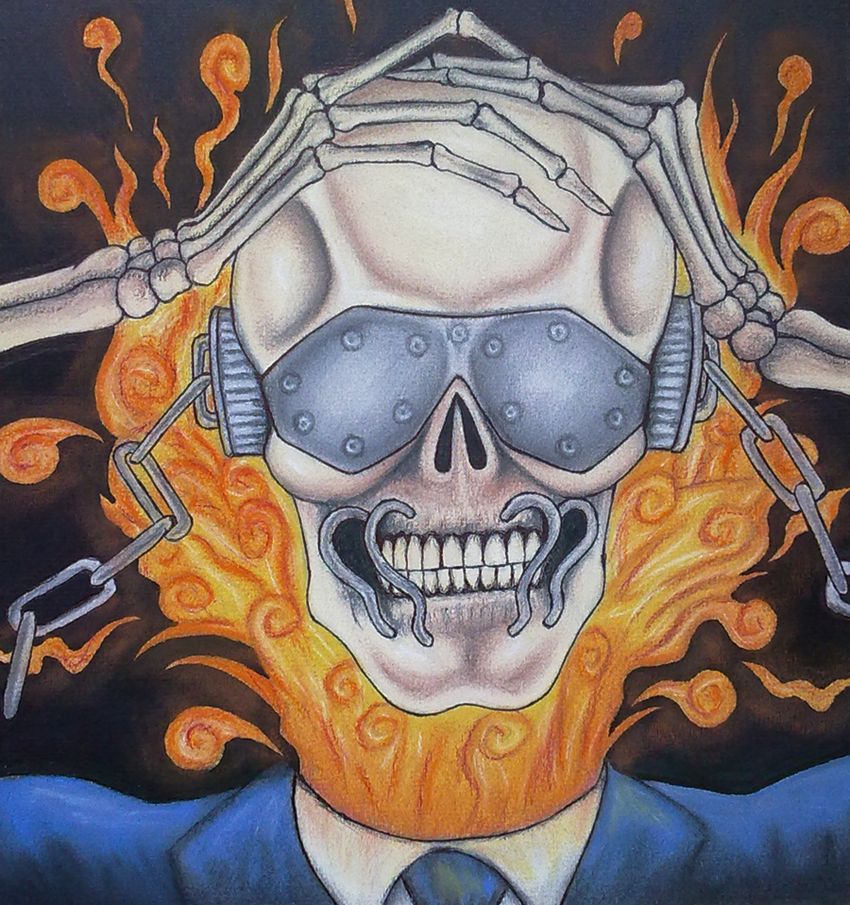 This Is A Change Of Pace

I haven't reviewed many like this for a while.

Starting with some of the flaws of this, which aren't man, I want to point some sort of Fuzziness to this. In the high mode it feels a little fuzzy, I'm not sure if this is due to Jpeg Artifacting, A filter placed over this if done digitally, or if this was an actual painting if perhaps the camera quality and/or the texture of the surface is getting in the way. Either way there seems to be a slight pixelization over the final. I don't want to be too hard on this since it is basically elements usually beyond the control of you the artist. But I do feel in need mention.

From here I want to say that the some of the metal surfaces on this could use a push in both directions. Doing such will give more of a shiny metallic feel.
And on a similar note, I think you could have used some stronger shadows around various parts of the body, like under the collar and tie.

And continuing my segway Lets talk about the secondary light put off by the flames of the head. I being that close you would have had some color bounce on to the suit and on to the chain as well as the other places. You started this on the bones in a couple other places but didn't get much further. You got some of the secondary bounce lighting in there, but just not the transfer of orange color.

As already mentioned you have done a nice job with the lighting. You have some solid bounce light as well as the secondary lighting .

The over all composition is nice. I noticed that it is not exact center, but it is centered enough to really draw in the attention of the viewer. This shows good use of posing and lighting.

The structure, although simplified, is sound and works well with the piece, and the level of detail is pretty consistent over all.

Nice work.
Perhaps you could elaborate on what medium this is, cause I wanna say that is is painting.

THANKS A LOT FOR ALL THE FEEDBACK!!
It was actually the most helpfull review i've got in a while.

I made it with pastel. It looks a little fuzzy because of the cellphone camera AND the surface :(