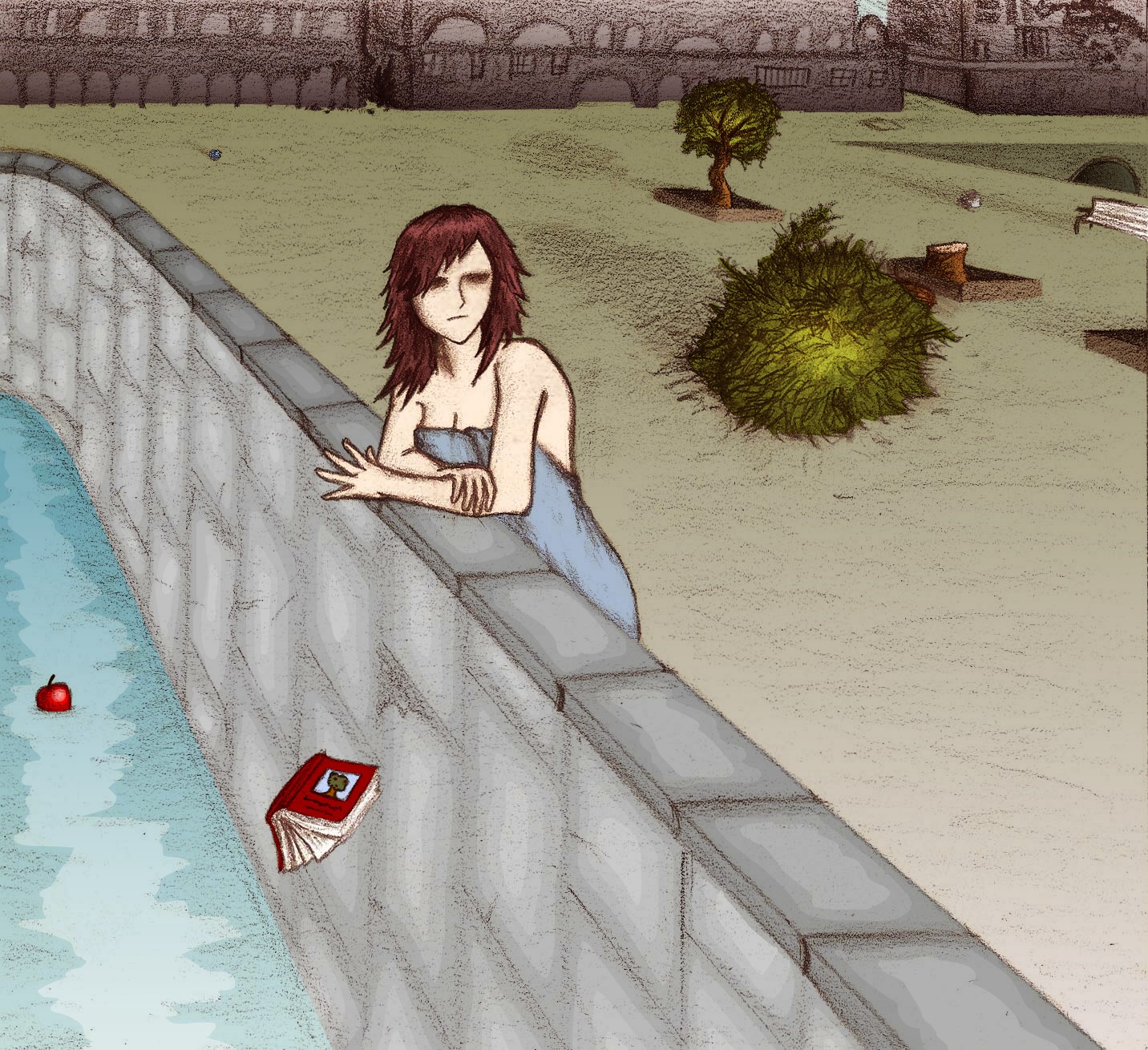 She's alone at some random part of the world, and she dropped her book because she just doesn't give a damn.

You're my favorite artist/game maker. I love how the pictures that you add are more to the story of your game. I assume that it was well thought out. You inspire me, and I can't wait to see more of your work. ^-^

I'm glad you like my stuff!
THANK YOU SO MUCH!!

I liked the ''pos-apocalyptic'' background and it makes me feel alone too!

THANK YOU VERY MUCH!!

Well you art is awesome, dont get me wrong, but i think some shadows on the main character of the pic, wich is the girl, would be really good, and i think her back is a little too big, but besides that, its really great :D
May ask you a couple of questions?1Â°How do you color your artwork? 2Â° Is she using a towell? ^w^ Keep up the good work

Actually, I added some shadows on the girl, but they are hardly noticeable. About the back, it seems fine to me, maybe it's just the position of the arms which makes it look that way. Also, I think she has the best hair I've ever drawn, till now :D

I used to color my draws with color pencils, but they looked very scratchy and not very bright, so I've been using flash for my latest draws (this one included). But I'm saving some money to buy another material to color them, like pastel or something like that.

I like how you always seem to include an apple in your drawings, could be a trademark, just like DalÃ- and his clocks he always drew.

I like Domo's idea with the sequel to the coconut-picture. Could also be a prequel. The two are stranded somewhere (or maybe she is alone in that place and she meets the male sometimes lates).

But as we can see she throws away the book here, it has to be some sort of prequel, as we can see the same book in the coconut shell in the other picture.

Anyway, sequel or not, I like this piece and I also like it's related in some way to the other picture. We can see some elements in both pictures and the female character seems to be the same as well.

There's really nothing more I can say about this picture other than: I really like it!

THANK YOU SO MUCH!!!!
Though it's not a sequel, it's still related to the coconut picture, but also is related to the Long Legs girl picture, and not just because of the apples.

There's really nothing more I can say about this review other than: THANKS A LOT!!!!
(Also, I saw you added some of my pictures to your favorites, that really means a lot!!!)