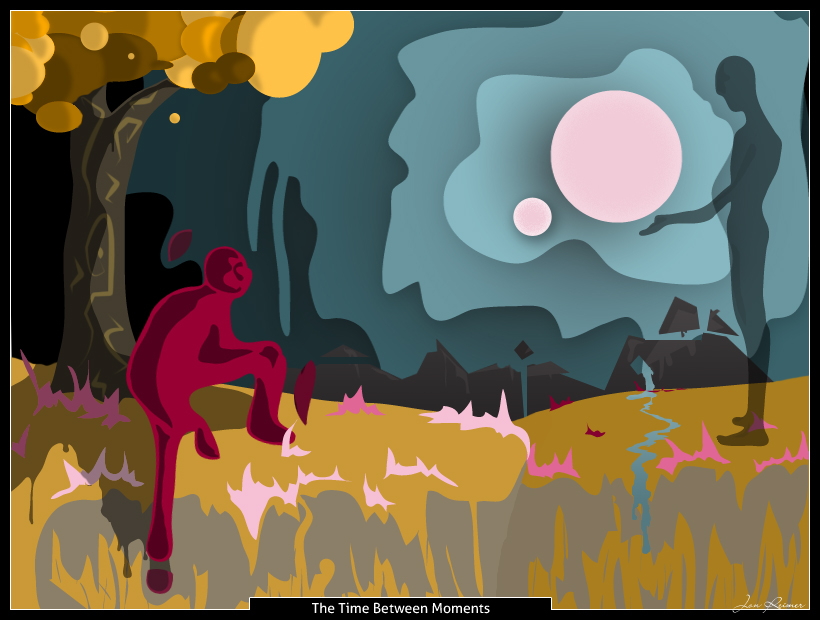 The Time Between Moments

This was done as my Colour Theory final project. That's all you need to know.
If you WANT to know more, however... boy are you in for a treat:

ARTIST STATEMENT:
It could happen to anyone.
You are sitting outside, enjoying the gentle caress of a late-summer breeze, aimlessly watching the leaves shimmer and dance, when you begin to see what is actually going on around you. You watch the cool blues of the sky bleed into their surroundings; watch as a hill off in the distance is swiftly isolated and you mentally deconstruct its geometry; you watch as the shadows that dance about your feet in the afternoon sun begin to stir more violently until finally they rip free of the ground, standing regally tall yet with unquestionable frailty.
Your reverie last for only a few moments before it is harshly and inevitably interrupted, but the profound difference in perspective is starkly apparent. It is this concept--this experience--that I wished to convey in The Time Between Moments. Not the revelation itself, of course, but the experience that leads to the revelation. This is where my project has changed most significantly from what I proposed. Initially, I wished to visually solidify the subjectivity of reality, but in my final piece the patient pondering of the query "What is reality?" has become the centrepiece. I want the viewer to be able to look at my design and become a part of that moment of careless pondering, free of any mental constraints and rationalities, and I believe I have done just that. For instance a key aspect of The Time Between Moments is the lethargic, drippy running paint that nearly every part of the composition is slowly becoming. The line between concept and application was as blurred as the running paint mixtures, as the realization that the runny objects are primarily solids. Even in the case of the sky, the colder, harder blue is dripping, whereas the soft, hot sun is not. As far as the colour palette is concerned, the split-complimentary harmony lends itself well to the design, adding a splendid contrast between warm and cool, while still allowing a strong harmonious relationship present in the nearly analogous red and orange of the "split" portion of split-complimentary. The chosen palette also allowed for colour to be used expressively instead of, for example, descriptively. The colours are close enough to those of "real life" that they aren't visually jarring, but they are different enough to become a point of consideration. Depth was also strongly incorporated into the design, albeit with some difficulty in the project's early stages. The use of value, saturation, overlapping shapes, diminishing size, and colour temperature all help to accomplish this sense of depth, allowing for much more visual interest. All in all, I feel that design and colour were fused successfully in, though I might have liked to add a stronger focal direction. However, I found it quite difficulty to give the design a focal path to follow while retaining the strong balance and drowsiness I intended to keep.

Artists Note: The fractured mountains and the "soft solids" are heavily inspired by the works of Salvador Dali. This particular artist recommends a visit to Dali's works for a truly surreal perspective. Also, there's so much more I could have written about this piece, but alas I fear I've been excessively verbose already.