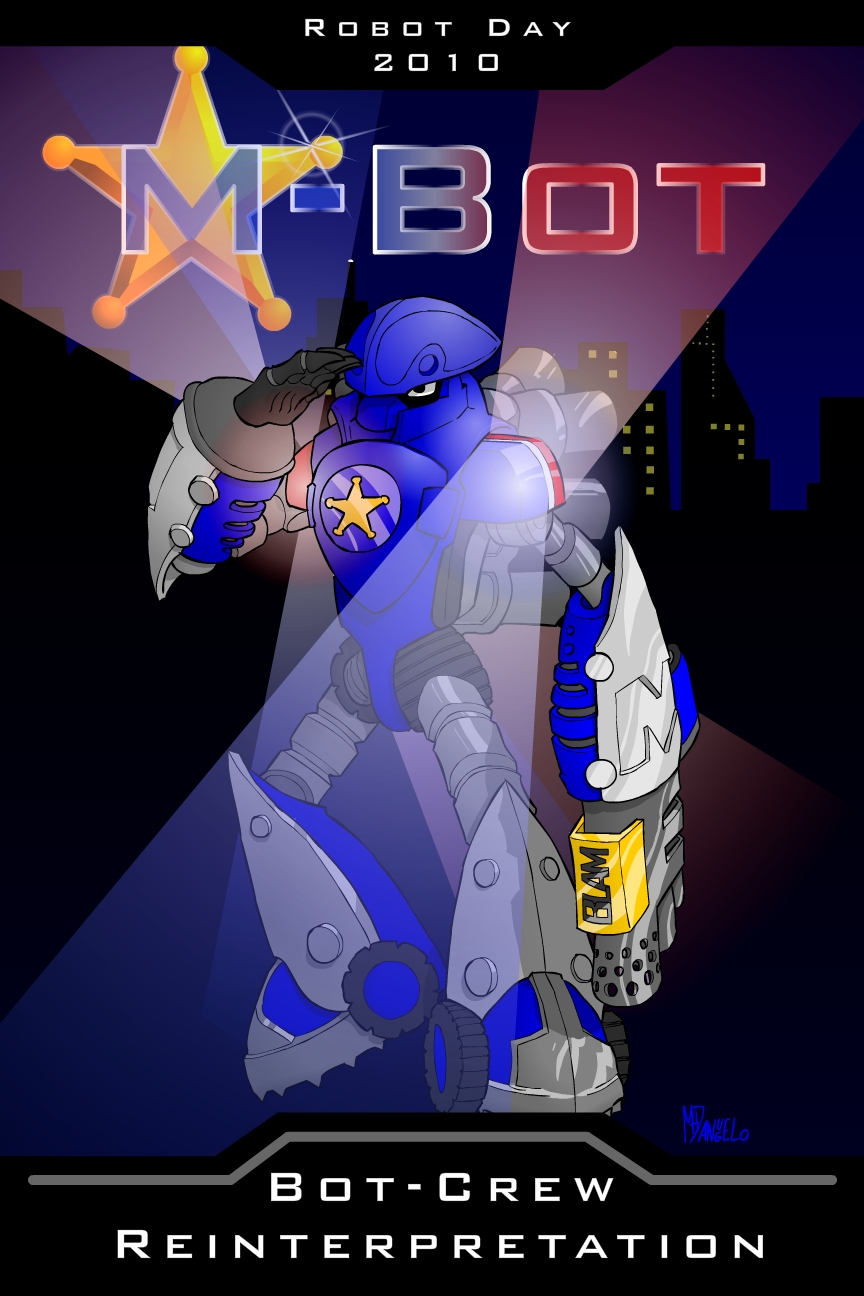 Happy Robot Day 2010 everyone!!
Following with the Bot-Crew reinterpretation I proudly introduce you M-Bot Reinterpretation.
One of the most disused remembers of the whole crew, love by ones, hated by many.
M-Bot has won the hate of many because of being the one who gives the face for the decisions of the admins and the general whistles of the users.
This art is based mainly in the âEUoeM-Bot the gameâEU, the mainly modification is a set of wheels and a V-12 motor on the back, As he is traveling from one user account to the other and all around the siteâEU¦ seriously, he has to be fast as hell!!

~~REVIEW~~
M-Bot is pretty cool, heh you should make X-Bot haha and he would be the ultimate reviewer, heh anyways but i like this one and love all the {BEAMS} here and you gave it that extra touch too which is also very nice indeed, the {STAR} could have more of a glaring shine to it though, its ok but just felt its the center peice and is kinda like his badge almost, you should make it really shine, As an extra touch on this poster i think you should ad in the backround some sirins or some sort maybe from a police car and or a police ship, it would ad abit to it i think anyways, but really for the mostpart you have a really good poster here, maybe not as impressive as p-bot but still really good, i love all the littel details you put in this, it really shows off the effort like the {M} on his arm and a few other things, its those little things that really bring the robot out, so props to you on an awsome job. but anyways keep up the awsome work on these posters and all.

~~THINGS TO IMPROVE ON~~
Give the {STAR} some shine to it a sorta glaring shine, also suggested maybe a police car or ship passing in the backround with the red and blue lights that would be a nifty backround scene

I don't think I'm doing other M-Bot... yet who knows. If I do I'll keep this in mind

he is a blammer but don't blame him for the blam, is the grounds which turns him in a monster or a hero this man...
wait a minute... what was I talking about? :S

i dreaded the day you would make this ~_~
but none the less is good!

I also drawn a Transformer-like version of M-Bot.

thanks for adding me to your favorits.
If you did you should submit it.